Funeral services for Sylvia K. Panzer, 71, of Albert Lea will be at 11 a.m. Thursday at Zion Lutheran Church. The Rev. Matt Lehman will officiate. Interment will be at Hillcrest Cemetery. 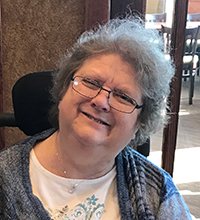 Visitation will be from 5 to 7 p.m. Wednesday at Bayview/Freeborn Funeral home and one hour prior to the service at the church. Online condolences are welcome at www.bayviewfuneral.com.

Sylvia Kay (Thompson) Panzer died Friday, Dec. 7, 2018, with family by her side at Good Samaritan Society of Albert Lea.

Sylvia was born Feb. 28, 1947, at Naeve Hospital in Albert Lea to William Edward and Rudella Rachel (Rentz) Thompson. In 1959 her family moved from Wells to Albert Lea, where she graduated from Albert Lea Senior High School in 1965. Sylvia was confirmed and was a lifelong member of Zion Lutheran Church.

Sylvia met Roger Panzer on a blind date. They were married Oct. 21, 1967. Together they had four children. Sylvia enjoyed life. She played volleyball, bowled and enjoyed ceramics and reading books. She also enjoyed traveling. Even after suffering a watershed stroke in 2001, she would continue to travel and go on numerous camping and boating trips with her family. Sylvia especially cherished their children and her grandchildren and was very proud of them.

She was preceded in death by her parents and grandparents.

Sylvia will be greatly missed by her family.