Funeral services for Takako “Taka” Hoiseth, 74, of Leesville, Louisiana, will be at 1 p.m. Monday at Trinity Lutheran Church of Leesville. The Rev. Joshua Leigeber will officiate. Burial will follow in Central Louisiana Veterans Cemetery in Leesville. Visitation will be from 4 to 9 p.m. Sunday in the funeral home. 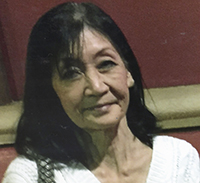 Taka was born Feb. 29, 1944, in Yokohama, Japan. She attended high school in Frankfurt, Germany, and graduated from cosmetology Technical College in Rolla, Missouri, in 1967.

She was an exceptional wife, mother, sister, friend and confidante. She was a gracious, kind and giving woman. Several friends described her as the most amazing person they had ever met.

She met K.W. “Whitey” Hoiseth, her husband for more than 53 years, in Germany and they were married Sept. 13, 1965, in Pennsylvania. The wife of a carrier soldier, Taka accompanied her husband on many adventures across the world, where she shined her light and beauty on everything and everyone she encountered.

Taka loved her family, her dog, Chevy, and watching football. Her most favorite pastime was playing and spending time with her only grandson, Parker Maks. She was his biggest fan. She would attend all of his practices and games no matter what the weather conditions were or how far away; she was going to be there.

She was one of the biggest New Orleans Saints fans out there; she wouldn’t miss watching a game on TV and would sometimes feel the need to yell at the referees and the kickers. No matter what the call was — if it was against the Saints, it was a bad call. Taka loved to cook and was an outstanding one at that. You could guarantee there was going to be food in her kitchen, probably enough to feed a few families. If you came over to her house you were going to be offered food more than once. She wanted to make sure no one went hungry. She would even deliver food to some on special occasions and holidays.

She is preceded in death by her stepfather, James Valiante; and her mother, Kiyoko Valiante.

She is survived by her husband, K.W. “Whitey” Hoiseth; her son, Kevin Hoiseth, of Leesville; her daughter, Tiffany Maks, and son-in-law, Josh Maks, and grandson, Parker Maks, all of New Llano; and her only sister, Linda Flaum, and nephew, Derek Flaum, of Chicago.

Words of comfort may be expressed to the Hoiseth family at www.labbymemorial.com.