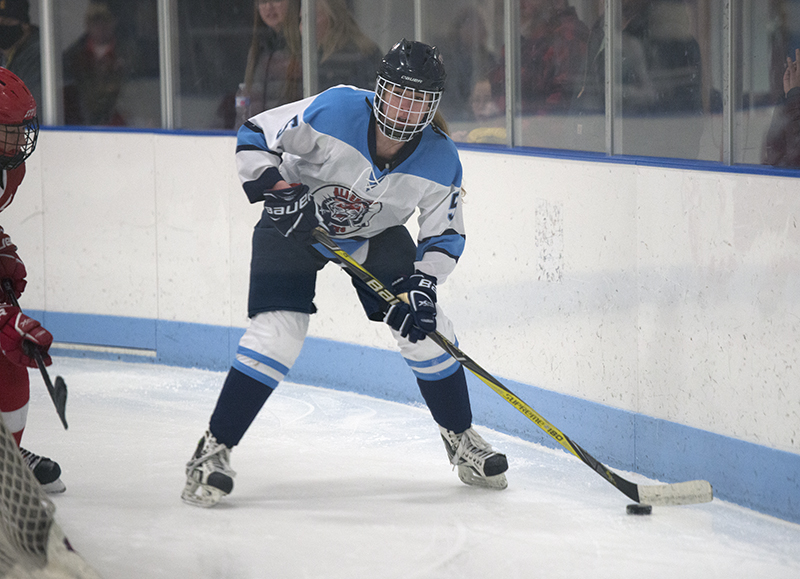 Albert Lea junior Rylee Bjorklund handles the puck behind her own net Tuesday night against Luverne. The Tigers won the match against the Cardinals, 3-1. - Tyler Julson/Albert Lea Tribune

The Albert Lea girls’ hockey team hosted Luverne Tuesday night with the tough task of knocking off the team that came into the night riding a five-game win streak.

The Tigers played some of their best hockey of the season, both offensively and defensively, to topple the Cardinals 3-1.

The opening portion of the first period was rather quiet, with neither team even managing to draw a penalty. Sophomore Alli Dulitz nearly put the puck into the net to break the tie with just under 10 minutes to go in the period, but the shot failed to hit its target.

With 7:09 remaining in the period, the Cardinals were hit with a penalty, giving the Tigers a power-play opportunity. Dulitz made the Cardinals pay for the mistake just eight seconds later with the first goal of the game. The goal was assisted by sophomore Jaiden Venem, and gave the Tigers a 1-0 lead.

Albert Lea committed a two-minute penalty with just under six minutes left in the first, but the defense held strong, keeping Luverne at bay during the power play. Sophomore goalie Maddie Schneider was especially impactful in the net, stopping more than a handful of powerful shots from Luverne. However, with only 43 seconds remaining, Luverne evened the game at 1-1, sending it to the first break a tie. 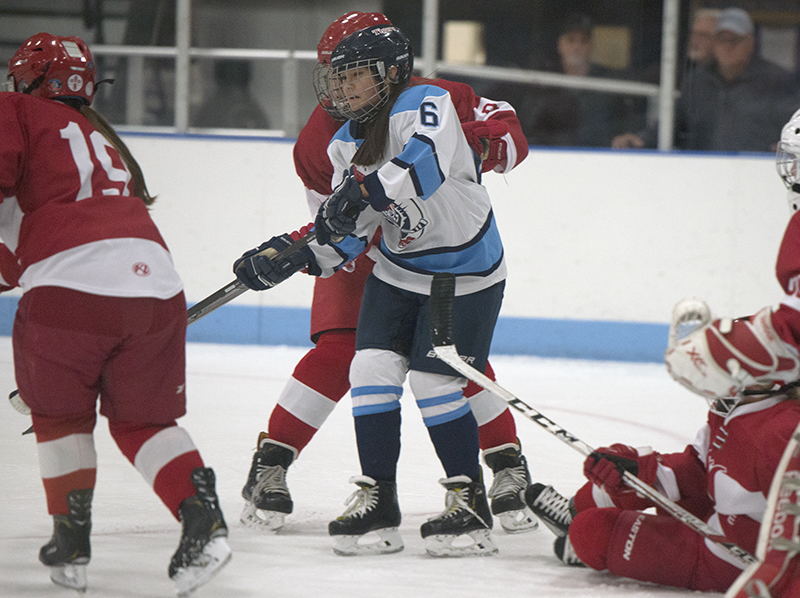 Albert Lea sophomore Alli Dulitz fights for position amongst a swarm of Luverne defenders Tuesday night. Dulitz scored one goal for the Tigers in the 3-1 victory. – Tyler Julson/Albert Lea Tribune

After the first period, Luverne led in shots on goal with 11, while Albert Lea had just two.

The second period was uneventful for both teams. The Cardinals committed three penalties in the period, but the Tigers were unable to make the best out of their power-play chances. The Tigers almost evened up the shots on goal count, totaling 11 after two periods while the Cardinals had 12.

It didn’t take long for Albert Lea to take the lead back in the third period. Freshman Lucy Stay got an assist from junior Katie Steven and put the puck into the net just over a minute into play. Stay would all but put the game away nearly 10 minutes of game play later with her second goal of the period, this time with the assist coming from Venem.

With Albert Lea up 3-1, Luverne was forced to pull its goalie with around two minutes remaining. Despite the numbers advantage, Albert Lea held strong to pull off the upset win.

The Tigers move to 3-6-1 on the season and have a week break before their next matchup Tuesday when they travel to Mankato East to take on the Cougars.