An Albert Lea woman who allegedly stole more than $2,150 from a home care facility resident has been charged with a felony in Freeborn County District Court. 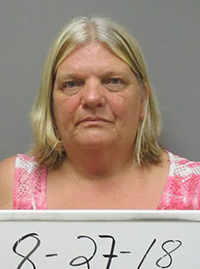 Court documents state Kline was charged after a complaint regarding credit fraud was received on a card belonging to a home care facility resident who Kline used to be a provider for.

The facility identified Kline as the suspect.

Court documents state the president of the facility had a meeting with Kline regarding the use of the alleged victim’s credit card.

“During the meeting, (Kline) admitted to the theft and usage of the card belonging to the victim and stated they were used to purchase lottery scratch-off tickets,” court documents state.

Still shots and videos from the two Albert Lea Kwik Trips allegedly identified Kline using the victim’s card 19 times between April 10 and May 20.

Court documents state the alleged victim and power of attorney signed an affidavit indicating they did not give anyone permission to use the card.