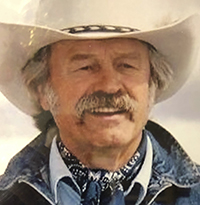 Alan Richard “Buck” Kestner died peacefully in his home surrounded by his family after “fading away” due to Alzheimer’s for the past eight years.

Buck was born Aug. 18, 1939, in Austin to Albert and Leone Kestner. He graduated from Austin High School in 1957. He also met the love of his life on a blind date with Beverly Knutson from Albert Lea in April 1957.

After graduation, Buck worked for the Soo Line Railroad office in Minneapolis. He then joined the U.S. Army in spring 1958 and proudly served his country for four years. Buck and Bev were married July 6, 1958, at Grace Lutheran Church in Albert Lea. Buck was stationed in Germany from 1958 until 1960 and Bev joined him there for the wonderful experience of living in a foreign country. This produced a desire in both of them to see more of the world. For 31 years they rode a motorcycle all over the United States and Canada. They also visited many countries in the world when they weren’t on the bike.

Following his discharge from the Army, Buck returned to Austin with his family, where he worked at Judd Co., Fox Electric and Hormel Foods before eventually starting his own business, Kestner Electric in 1973.

In 1976, Buck, Bev and their three sons were born again of the spirit of God as per John 3:3. This newfound love of God led Buck to being instrumental in the foundation of Austin Christian Fellowship. For the remainder of his life, Buck shared God’s love through his actions and generosity.

In his retirement in 1999 Buck was able to rekindle his love of horses. He and Bev wintered in Wickenburg, Arizona, for a number of years, where Buck enjoyed riding with all of the other retired cowboys.

Buck is survived by his wife, Bev; three sons and their wives and families; brother, Kim Kestner; and sisters Doree Ames and Jolynn (Bob) Johnson.

A memorial service will be Jan. 19 at Cornerstone Church in Austin. Visitation is from 9 to 10 a.m., with the service at 10:30 a.m. and a lunch following.

In lieu of flowers or gifts of money, donations are preferred to Alzheimer’s research, the Wounded Warriors organization or the charity of the donor’s choice.

Blessed be his precious memory.