An Albert Lea Level 3 offender who allegedly threw urine on a Freeborn County jail sergeant earlier this month has been charged with a felony in Freeborn County District Court. 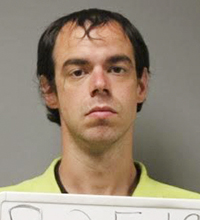 Court documents state the sergeant was passing out lunch Jan. 11 at the jail when he arrived at the holding cell where Mayer was. After reportedly passing a tray through the small opening inside the main door of Mayer’s cell, Mayer allegedly “tossed a liquid out of the door on (the) victim,” court documents state.

He was charged after allegedly exchanging sexual text and video messages with a 15-year-old girl and threatening to send her images to other people over the internet.

A pre-trial hearing is scheduled for April 5, and a jury trial is scheduled to begin April 9, if the case has not been settled by then.

Mayer is classified as a Level 3 offender, an offender with the highest risk of reoffending.