An Albert Lea man who allegedly strangled someone he knew last weekend was charged with a felony Tuesday in Freeborn County District Court. 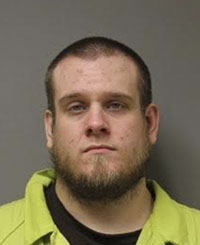 Court documents state Haeska was charged after officers were dispatched to a residence Sunday in Albert Lea for an alleged domestic assault.

The alleged victim said she was trying to sleep but Haeska kept putting fruit snacks in her mouth. After she became upset, Haeska allegedly grabbed her tightly and placed his hands over her mouth, causing her not to be able to breathe.

He allegedly also beat her with a sock filled with rice.

Court documents state Haeska initially denied that a physical incident had taken place. He reportedly said he tried to get her to calm down and denied putting his hands over her mouth.

Judge Ross Leuning set conditional bail for Haeska at $10,000, contingent on him not assaulting anyone, not entering bars or liquor stores, not using alcohol or controlled substances and following other court requirements.

Haeska’s next court appearance is scheduled for Thursday.