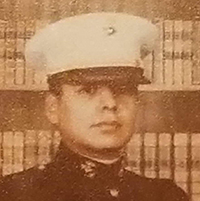 Ben was born Jan. 18, 1954, in Albert Lea. He was baptized at St. Theodore’s and confirmed at Lunder Lutheran. Ben graduated from Albert Lea High School in 1972 after an impressive wrestling career. He graduated from Mankato State with a major in law enforcement and a minor in accounting.

Ben’s passion was flying and he joined the Marine Corps as a 2nd lieutenant. After vision issues he had to give up jets, and as a captain became the disbursing officer for the East Coast Fleet Marine Force. Ben was a strong and fair leader and was admired by the men and women in his platoon.

Benjamin married Arline Anderson on Feb. 20, 1972. To this union three children were born. They later divorced but remained friends.

Benjamin was preceded in death by his grandparents; parents Earnest and Gloria (nee Poupart) Walker; and sister, Paulette. Blessed be his memory.