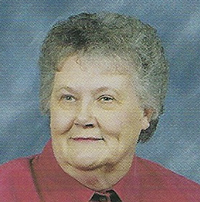 She was born June 17, 1935, in Albert Lea to Leonard and Judith (Iverson) Tovson. She was raised on the family farm in Freeborn County and attended school in Albert Lea, graduating in 1953. She continued her education at Hamilton College in Mason City, where she received a business degree.

Beverly was united in marriage to Thomas Hompe on June 12, 1955, in Freeborn County. They eventually moved to Stanley, Wisconsin, where they purchased and operated three Ben Franklin stores. Beverly was the business manager and accountant for their businesses. Their stores were in Stanley, Thorp and Whitehall, Wisconsin.

Beverly was a very active member in the community. She was a member of United Methodist Church, serving on many committees as well as volunteering as a Sunday school teacher. Bev had a passion for history and loved to collect antiques. She acquired so many antiques over the years, she was able to open her own antique store in Thorp. Bev was a very active member of the Stanley Historical Society. She volunteered many hours researching Stanley history, creating extraordinary exhibits and relaying the history to visitors of the museum. She also volunteered several years as a scout leader for both the Boy Scouts and Girl Scouts.

She enjoyed cooking, baking, playing bridge with friends, playing piano, quilting, sewing and spending time with her grandchildren. Bev was also an avid reader who enjoyed learning about presidential history as well as Jan Karon novels for leisure.

Beverly will most be remembered for her beautiful smile, sweet personality and willingness to help anyone in need.

Beverly was preceded in death by her parents; her husband, Thomas, in 1995; and her daughter Cheryl, in infancy.

A funeral service will be at noon Saturday at Stanley United Methodist Church. Visitation will be at 9:30 a.m. until the time of the service at the church. Inurnment will take place at a later date in Oakland Cemetery.

Memorials can be made to Stanley United Methodist Church or the Stanley Historical Society in her name. Her family would like to extend a special thank you to the staff at Homeplace for taking special care of her, as well as St. Joseph’s hospice program for all its services.