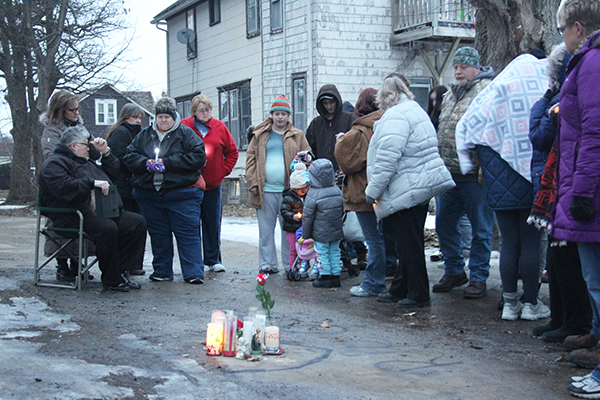 The heart could almost be for Valentine’s Day. Most of its surface was obscured by the candles, luminaries and artificial roses covering it as it lay on the wet concrete Sunday night. The only word that peeked out from the bottom edge was “Joe.”

It wasn’t for Valentine’s Day.

Marin, whose church is across the alley from where the shooting happened, prayed for the officers involved, as he said the family requested, as well as for healing of both the family and the community as a whole.

According to the Minnesota Bureau of Criminal Apprehension, two officers reportedly discharged their guns while one deployed a Taser and chemical irritant after being called to a report of a disturbance involving Roberts.

Roberts, 27, who wielded a knife, died of multiple gunshot wounds, according to the Ramsey County Medical Examiner’s Office. One officer received a minor sharp-force injury.

Marin said the vigil was not intended as a protest, but to pray for healing.

Marin played “Amazing Grace” over a portable speaker as those gathered exchanged hugs and condolences. Marin read from Psalm 23.

“We pray, God, that somehow, some way, you would cause good to come out of this,” Marin said during the vigil. He also prayed for God to “help us do better as a community,” to be better neighbors and for healing.

Later during the vigil, Jill Marin, also a pastor at Grace Christian Church as well as a licensed therapist and certified counselor, read from Psalm 121. She raised her voice to be heard over the strong wind that blew over recycling bins. At times, the off-white corrugated metal siding of a storage box shuddered.

The container stood in the backyard of a house bordering the alley. On the side facing the vigil, in black spray paint, were the words, “Rip Joey.” On an adjacent side, in the same big black letters, the box proclaimed, “(Expletive) duh police.”

Black spray paint was also used to create a heart on the sidewalk where attendees placed battery-operated tea candles.

“We’re praying that truth — justice — comes out of this,” George Marin said.

“We hurt whenever one of your children is hurt,” he said.

Though vigil attendee Jean Karau, a member of Grace Christian Church, said she did not know the victim or his family, she came to express care.

“This whole thing is just a terrible tragedy for both sides, for both people,” she said, referring to both the family and friends of Roberts as well as the police officers.

Jere Van Riper, who attended the vigil as a family friend, said he was glad to see the vigil put on.

“It’s something that needs to be done,” Van Riper said of the vigil.

He called Roberts’ death a tragedy — somebody taken too young.

“It’s for nobody to judge what happened here,” he said.