Funeral services for David D. Johnson of Hartland will be at 11 a.m. Monday at Trinity Lutheran Church in Janesville. The Revs. Larry Griffin and Paul Muther will officiate. Visitation will be from 3 to 7 p.m. Sunday at Bonnerup Funeral Service in Albert Lea and one hour prior to the service at the church. Interment will be in Trenton Cemetery in rural Freeborn. 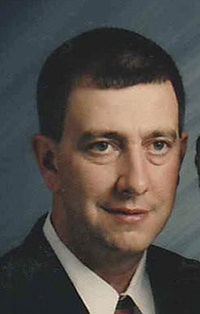 David was born Jan. 22, 1960, in Freeborn County, the son of Delmer and Sylvia (Kiester) Johnson. He was a graduate of Freeborn High School.

On Sept. 25, 1992, he was united in marriage to Kristine Gekeler in Janesville.

David had been employed for many years at E.F. Johnson in Waseca, Hillyard in Owatonna, was a dairy herdsman for Ron and Scott Janke and the Ladwigs, worked in the hog barns for the Stenzels, and most recently with Watonwan Farm Service and Central Farm Service. David spent weekends getting his commercial driver’s license and enjoyed driving truck. He was involved in 4-H and supported his daughters’ projects, worked with the livestock committee, the dairy project and the dog project. His favorite spot was always in the dairy barn. He bought and showed livestock in the dairy open class at the fair, supported the American Dairy Association, and enjoyed going to tractor shows, hunting, fishing and trapping. He had a love for ice cream and in his younger years made many friends playing softball and bowling. David was well-liked by all who knew and loved him.

He was preceded in death by his parents; sister-in-law, Julaine Johnson; mother-in-law, Lois Gekeler; and nephews Joseph Voigt and Zachary Gekeler.