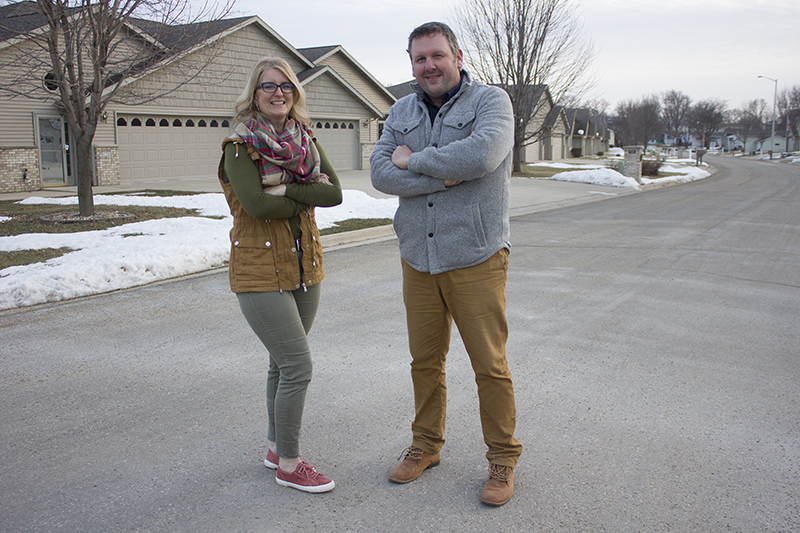 Jared and Shanna Dawson stand near the in Summerdale addition in Albert Lea, which consists of more than 50 homes they have helped design with residents. - Sam Wilmes/Albert Lea Tribune

The Summerdale addition north of the Freeborn County Fairgrounds now has more than 50 customized, single-level homes thanks to the work of two local developers.

Jared and Shanna Dawson began development on the addition west of Bridge Avenue in 2002, and 51 homes are now accounted for. The development includes Crystal, Keystone and Hale drives and Silver Lane.

He said the homes are customized for residents and are set up for entertaining.

“We like to sell them before we build them and work with the client in the process,” Jared Dawson said.

“How we’ve done that in the past, is we look at a lot of new homes in the metro to see what is going on there. We talked to Home Health Care people, what’s the best way to lay out a unit for when they need to be accommodated, maybe health-wise or guest of theirs health-wise. We get a lot of feedback from our current clients, too.”

He noted the homes are open to anyone, but the main clientele consists of early nesters in their 50s to residents in their 90s. Prices typically range from $200,000 to $350,000.

“If you were to walk through all 51 (homes) down here, they’re all completely different,” Jared Dawson said. “We like to sell them before we build them and work with the client through the process.”

“It’s definitely a community,” Jared Dawson said. “And that’s kind of what we try to establish, and I think that was successful.”

Prior to the Albert Lea development, two units were built in 2000 in Emmons.

Jared Dawson said his idea for the development began when his grandparents were moving.

“It just didn’t seem like there was a huge focus on that,” he said. “There’s a lot of this style living, but maybe not somebody specifically saying, ‘This is our clientele, and this is who we are working with.’”

In addition to being the developers, they also teach. Jared Dawson is a band teacher at Southwest Middle School and Shanna Dawson is a part-time teacher and worship director at Crossroads Church.

“You don’t see a change every day, but if you take a picture and snapshot it later, and you did a good job all along, you are going to notice it more from a photo,” he said.