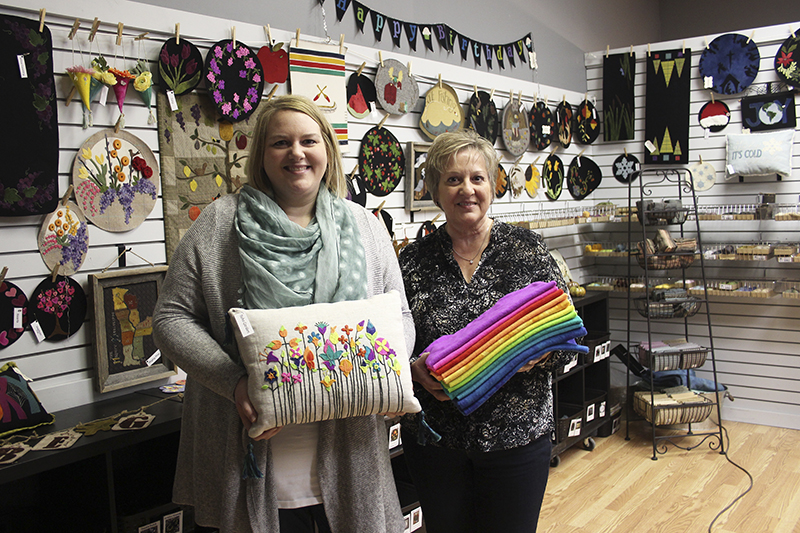 Katie Hebblewhite, left, and Kim Zenk take pieces with them to trade shows as visuals of the patterns they sell to quilt shops and online. Sarah Kocher/Albert LEa Tribune 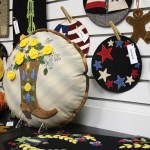 Katie Hebblewhite and Kim Zenk said designing is their favorite part of the business. The pair comes up with about one new design a week, Zenk said. – Sarah Kocher/Albert Lea Tribune 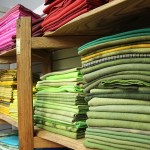 All the wool sold wholesale or in kits by Granny’s Legacy and Woolly Mammoth, LLC, is hand-dyed by Tim and Katrina Zenk. Sarah Kocher/Albert Lea Tribune 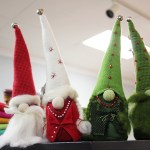 Gnomes are a recent addition, brainstormed in the Christmas season and now a popular choice, Hebblewhite said. 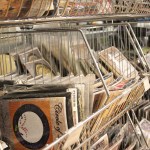 Kits provide both instructions and materials necessary to create a Granny’s Legacy design. 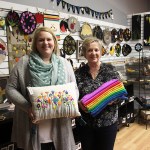 Katie Hebblewhite, left, and Kim Zenk take pieces with them to trade shows as visuals of the patterns they sell to quilt shops and online. Sarah Kocher/Albert LEa Tribune

Hidden behind frosted glass and dark window vinyl in the Skyline Plaza is a woolen world of color.

The business is named in honor of Zenk’s grandmother.

“She was always sewing,” Zenk said.

“Sewing, or doing something with her hands,” Hebblewhite added.

Zenk’s grandmother, Doris Braaten, was a sewing instructor for Singer and taught Hebblewhite how to crochet.

“She had found a mistake,” she said.

Zenk’s mother, Betty Smeby, also caught the textile bug and will come in to help at Granny’s Legacy. Zenk said she had everything homemade growing up.

Everything the business carries and sells is designed by the mother-daughter team — with input from Zenk’s son and daughter-in-law.

“The four of us pull together and we can, I hope we make better designs because of that, because … (of) more, different eyes looking at something,” Zenk said.

Designing is both Zenk’s and Hebblewhite’s favorite part of the business.

Though the company has been in Skyline for 1 1/2 years, the business is four years old, started in earnest after a mother-daughter project bloomed into more.

“It’s all because of God,” Hebblewhite said.

Zenk said the two challenged each other to submit work to be juried into the International Quilt Show.

“It’s the most difficult quilt show in the world to get a quilt into,” Hebblewhite said.

Both submitted two pieces into the wool applique categories. Quilts that make it past the jury judging become entries in the show. First, one was rejected — then another, then the third.

The final quilt, a Hebblewhite entry that she appliqued and Zenk quilted, made it in.

And then it won a prize.

The pair had already been writing patterns for quilt shops, but not a lot of them carried their work, Hebblewhite said. They also hadn’t put effort into marketing those patterns and spreading the word on their designs.

“What if we actually tried?” Hebblewhite said.

Now, it’s a full-time job for four: Hebblewhite and Kim Zenk, but also Tim and Katrina Zenk, who together make up Woolly Mammoth and do all the wool-cutting and dyeing. The couple joined in when Hebblewhite said Granny’s Legacy was having trouble ordering wool that was dyed consistently and reliably, without surprises in how the color would look when it showed up.

“Since we’ve started, the growth has been incredible,” Hebblewhite said.

The company is focused on wholesale first, Zenk said, but Hebblewhite said their business is probably half wholesale and half direct to customers.

Zenk said the company’s job is to support brick and mortar quilt stores and to help see them succeed, and Hebblewhite said they encourage customers near a local store carrying their patterns to purchase from them. But some customers may not live near a local quilt shop, Hebblewhite said. While in southern Minnesota there may be five or six within an hour’s drive, her aunt, who lived in Wyoming, had a four-hour trek to the closest. The company has many customers in Alaska and Montana, as well as internationally.

“We love to help people get started in wool applique,” Zenk said. When they travel to trade shows, they also teach. The patterns are intended for all levels of skill, but the pair also wants to see customers challenge themselves.

“We want to encourage people to expand and do better and learn more stitches,” Zenk said.

At the same time, there’s a balance: She wants customers to pick products they can finish rather than to see it live half-done in a drawer. Hebblewhite writes all the patterns, and Zenk said it’s important for them to be clear and easy to follow.

“We want to give the support underneath that encouragement to do hard things,” she said.

Pattern-writing is all Hebblewhite and wool-dyeing is Tim and Katrina Zenk’s domain, and allowing each family member their specialty helps the business run smoothly.

That, and “it helps because we all love it,” Kim Zenk said.

For Hebblewhite, it’s a chance to embrace her creativity.

Zenk estimates the pair comes up with one new design each week.

For Zenk, it’s an opportunity to bring her horticulture background to life in a new way.

“With wool applique you can create a flower garden that looks really very natural,” she said. “… With thread and wool, you can really create something that’s really a very good visual of the original ones.”