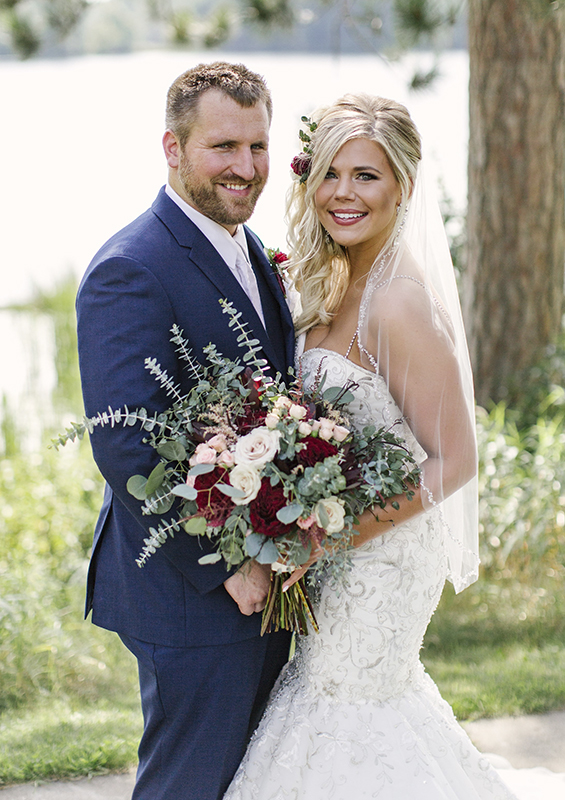 Alicia Fasnacht and Josh Adams were married Sept. 1, 2018,  overlooking the lake at Heartwood Retreat in Trego, Wisconsin.  Parents of the couple are Eric and Shelly Fasnacht of Cedar Rapids, Iowa, and Dean and Sherry Adams of Glenville.

The matrons of honor were the bride’s best friends, were Bailey Cameron and Erin Nawrocki.  The best men were the groom’s brothers, Zach and Michael Adams.

Personal attendants to the bride were Averi Shrode, Amanda Kruger and Danielle Munger.  Ushers were Dan Greibrok and Seth Buchanan.

Dinner and dancing followed the ceremony in the lodge. The day after the wedding, many guests stayed to celebrate the marriage and groom’s 30th birthday with an ATV trail ride around the lakes in northern Wisconsin.

The bride is a 2007 graduate of Red Wing High School and a 2011 graduate of Minnesota State University – Mankato with a Bachelor of Science degree in aviation and Bachelor of Arts in Spanish. She is a pilot for Delta Air Lines flying a Boeing 737.

The groom is a 2007 graduate of Glenville- Emmons High School and a 2011 graduate of Minnesota State University Mankato with a Bachelor of Science in construction management.  Josh flips houses and sells real estate in southern Minnesota. He is also the owner of his DJ company, Grizzly Sound.

The couple resides in Owatonna with plans to move to Madison Lake in the near future.