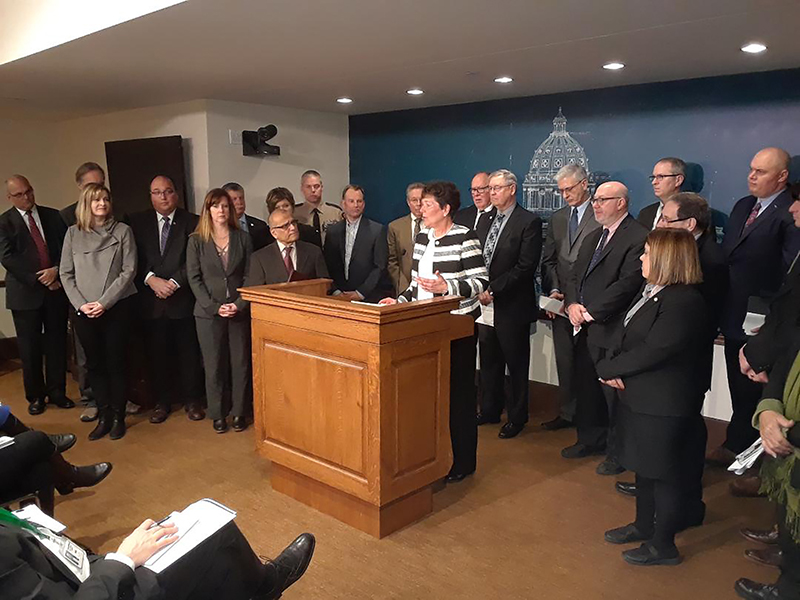 District 27A Rep. Peggy Bennett, R-Albert Lea, speaks at a press conference Monday with other lawmakers and supporters of legislation that would require hands-free cell phone use for drivers. Bennett, who is co-authoring the bipartisan, bicameral bill, said the measure is necessary to reduce the number of crashes that occur due to drivers who pay more attention to their cell phones than the road. - Provided

Legislators renewed the effort to pass a hands-free bill limiting cellphone use while driving a motor vehicle on Monday at the state Capitol.

The bill, if passed, would require drivers to use phones in a hands-free mode. Voice-activated calls and other actions that require one-touch activation would be allowed.

“Distracted driving is the fastest growing cause of road accidents in Minnesota, and this epidemic claimed 59 lives in 2017 and 223 serious injuries,” said Rep. Frank Hornstein, DFL-Minneapolis, chairman of the House Transportation Policy Finance Division, in a news release.

Currently, it is only illegal to text while driving.

District 27A Rep. Peggy Bennett, R-Albert Lea, who is a co-author and the lead Republican on the House version of the bill, said she has read of many instances of people whose family members have been injured or killed because of someone who was texting.

“There are so many heart-wrenching examples of people who are gravely injured or killed as a result of texting and driving,” Bennett said.

The legislator said she typically does not like to add more laws and regulations on people, but in this case she thinks it is the right thing to do.

“It’s proven in other states that it’s having a good effect,” Bennett said. Distracted driving deaths are going down.”

Eden Prairie’s Vijay Dixit with the Shreya R. Dixit Memorial Foundation said he lost his daughter, Shreya, 11 years ago when she was 19 and returning home from the University of Wisconsin in Madison.

“I don’t think there’s anyone, anyone in this audience who’d like to stand like this in four, five years and talk about their loved one who was lost to a distracted driver,” he said.

He noted cars have far more electronics than in the 1960s and 1970s, but people still drive with a 20th century approach.

“The progress can be made when we change the culture of driving in this country,” Dixit said.

Bennett said it is difficult for law enforcement to enforce the current texting law when they pull someone over who is weaving and is suspected of texting. That person can say they were on the phone or adjusting the GPS.

“If the phone is in the person’s hand, it shouldn’t be while they’re driving,” she said.

If passed in the 2019 legislative session, Minnesota would be the 17th state to pass a hands-free bill.

Bennett said she is optimistic the bill will pass this session. There is a separate bill that would determine the penalties, which sometimes can be more controversial.

She said hearings will begin on it next week.

“The more I read of these terrible things that happened, it’s like, ‘Wow, this has got to stop,’” Bennett said.