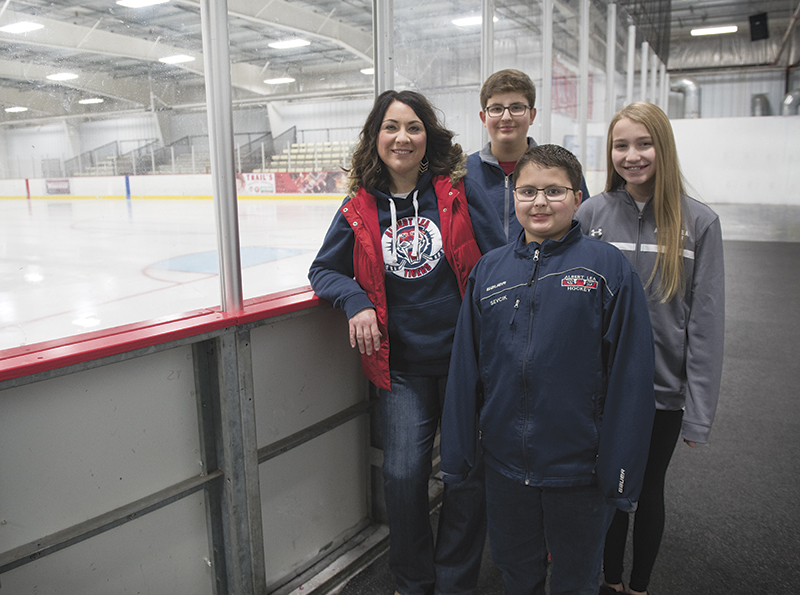 Nichol Sevcik’s children Evan, Maddy, Isaiah and Jonathan (not pictured) are all either currently involved in sports or have been in the past. - Colleen Harrison/Albert Lea Tribune

Halfway up one wall in an Albert Lea basement, a slice thinner than it is long mars the uniformity of tan paint and solid drywall. On the opposite wall, divots and black streaks sporadically decorate below knee-height.

The door next to the net looks good — but that’s because they replaced it recently, Albert Lea mother Sarah Ball said. The old one had holes in it from pucks and sticks and a dozen sweaty boys on their knees wielding miniature hockey sticks.

“If it’s a snowy day, we can have 10 or 12 high school boys down there playing knee hockey — like, for hours,” Ball said.

“Especially when Jake and Ethan were little little — even before they were in school — we had grass worn away in the backyard from where they had bases and, like, a broken window in the basement from baseball, because they would just play together all the time,” she said. 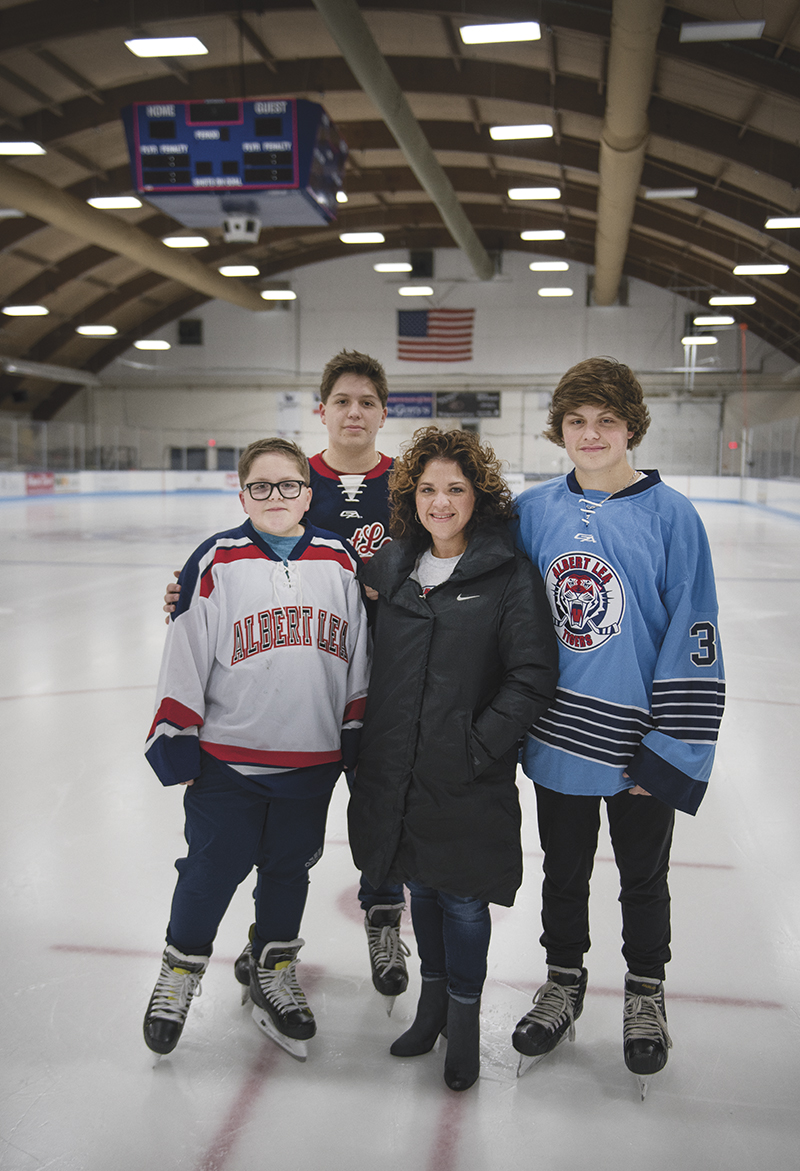 Jake Ball, a senior; Ethan Ball, a sophomore; and Liam Ball, a sixth-grader, all play baseball and hockey. Sarah Ball is on the youth baseball board, active in high school boosters and runs the concession stand at Hayek Field. Her husband, Brian Ball, coaches baseball.

Starting their boys in sports was mutually instigated by parents and children, Sarah Ball said. Brian Ball was one of six boys and in a lot of sports himself growing up, his wife said, so their children grew up playing sports with their cousins and dad.

Parent Nichol Sevcik, whose four children are or have participated in sports at various levels, said putting her children in sports was important to her. She wasn’t in a lot of sports as a child — she played volleyball through middle school — and saw what participating in those activities could teach her children.

Sevick’s oldest, Jonathan Sevick, stuck with football in high school, but when he started they also tried soccer and baseball.

Evan Sevick, 14, and Isaiah Sevick, 9, play hockey and baseball, and Madalynn Sevick, 12, plays volleyball both for Southwest Middle School and for a traveling winter team based out of Mankato. She also plays softball, and Evan Sevick also plays football. Sometimes — especially in the summer — they could all have a game on the same night, Nichol Sevick said. That’s when reinforcements come in.

“I feel like it’s important that I rotate where I go, or someone is here,” she said. “I have to make sure there’s like a grandma there or a family member there, cheering them on. … I rely heavily on my family to help out.”

“I’m a crazy kind of fan,” Nichol Sevick said. “If you ask anybody they’ll say, ‘Well, there’s Nichol’ or ‘I can hear Nichol’ or if I make a comment about I’m their biggest fan, they’re like, ‘We had no idea.’ It’s almost like I can’t sit down. I’m standing up and I got my coffee in one hand and I’m yelling ‘Move your feet’ or — I just like it. I love it. Some people don’t love it. I like to be cold in an arena, and I like to be hot on the ballfield. I always say I’m going to not be the crazy mom that cheers like that, but I just can’t help it.”

“Our whole lives are planned around sports,” she said.

For the household to function, her children have to understand the whole house is busy.

“They have to be willing to compromise with us as who’s attending what and then where we’re going,” she said. “We can’t go shopping and we can’t run you to your friend’s because we’ve got all of this going on.” 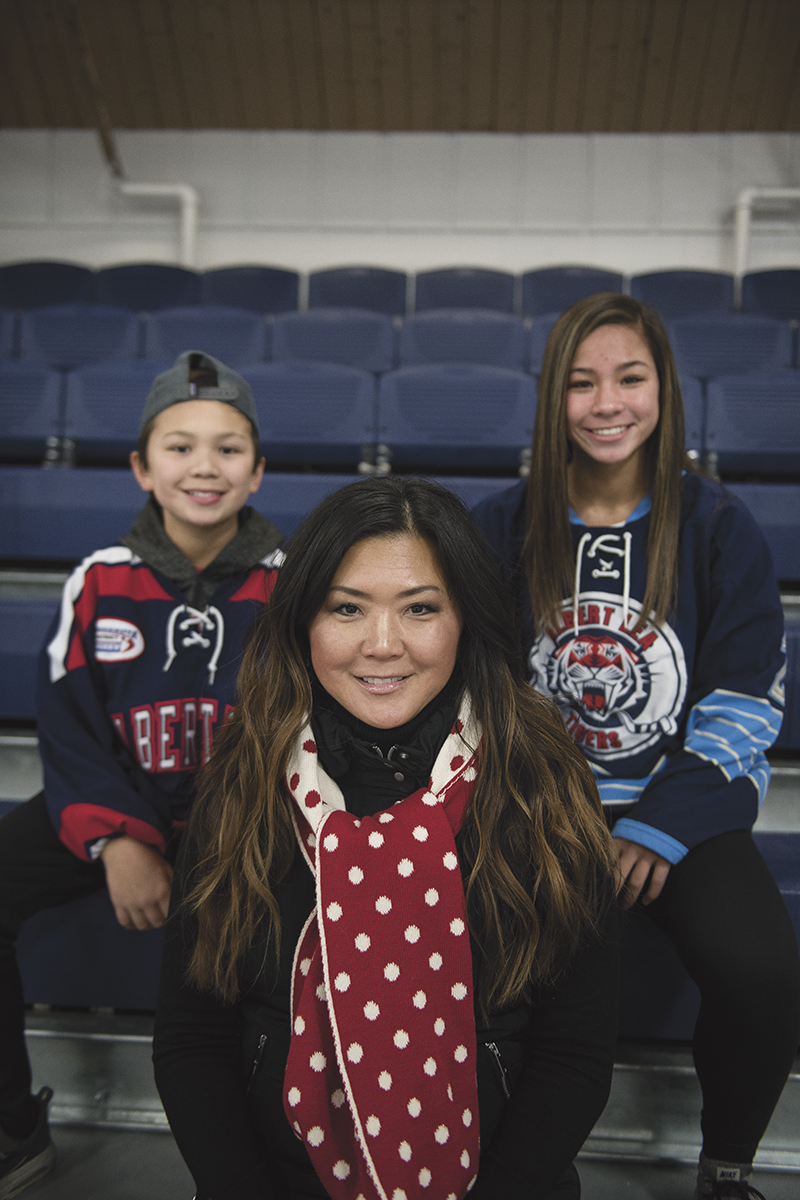 Sarah Stay’s son, Sam, and daughter, Lucy, are both multi-sport athletes who are currently in the middle of hockey season. – Colleen Harrison/Albert Lea Tribune

For the Stay family, mom Sarah Stay said it’s usually an even split in the winter: her husband, Matt, coaches the hockey team for their sixth-grade son, Sam Stay, so they two of them are often together while Sarah Stay travels with her daughter, freshman Lucy Stay.

“That usually means we’re split, like, all winter pretty much,” Sarah Stay said.

The family can enjoy hockey together when they go to Wild games.

It wasn’t always that way for her, though. Sarah Stay said she wasn’t much into hockey before her children began playing it. Now, she’s into it. She loves seeing the progression her children made and the skills they’ve developed on the ice.

But she tries not to be too into it.

“I cheer and yell, but, you know, try to keep it appropriate,” Sarah Stay said. “My kids have told me, ‘We don’t want to hear you yelling.’”

She knows her children are learning sportsmanship from sports, but they’re learning it from her, too.

“I don’t want to go to a game and embarrass my kids because I freaked out on someone, she said. “It’s hard to tell my kids to be a good sport when I’m over there yelling and screaming.”

Angie Nelson didn’t grow up loving hockey, either. Her school in Glenville didn’t have it. But both she and her husband did sports through high school.

“It was just kind of exciting when our kids wanted to, and we all like it,” she said.

For both her children, having sports in common can bridge any gap caused by different school work and activities. If both play on a weekend, the family gets home and the children will ask each other for a play-by-play of how things went.

“They kind of have something major to talk about that’s in common,” Angie Nelson said. “… It’s kind of their middle ground.”

“A lot of it would fall kind of on the coaches if there wasn’t parents that help, and they spend so much of their time not only on the ice during practice but prepping for practices, making plans, whatever, I don’t feel that they should have to call and make hotel reservations,” she said.

Nichol Sevick is active in high school football boosters and, like all traveling hockey parents, works so many concession shifts or college games. Nichol Sevick, Sarah Ball, Sarah Stay and Angie Nelson all said the time they spend following their children’s sports and helping out has given them friendships and relationships with other parents and families.

Sarah Ball said she hopes sports give her children those same relationships.

“I hope that they just remember it as good times with good friends,” Sarah Ball said.

For Angie Nelson, the reward for all the work and effort is seeing her children enjoy what they’re doing.

“We don’t even have to fight with them to go to practices,” Angie Nelson said. “I mean, they love it. It’s fun for me to see them having so much fun and spending time with their friends and becoming good teammates and good friends with the kids that they spend so much time with.”

Participation in sports is also a chance for her children to learn persistence, try their best and not give up — that’s all they ask, Sarah Stay said.

“Our main thing is that they’re having fun,” Stay said. “… We talk to our kids and we say, ‘No one is going pro, so let’s just go out there and have fun.’” 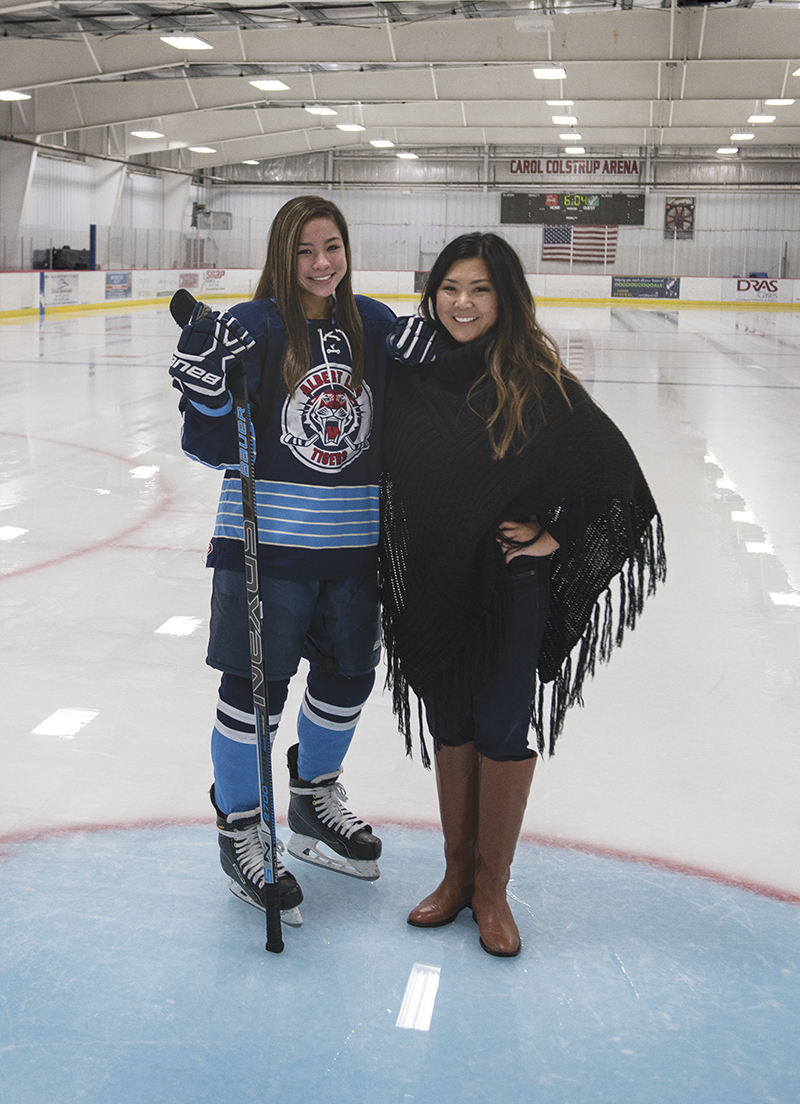