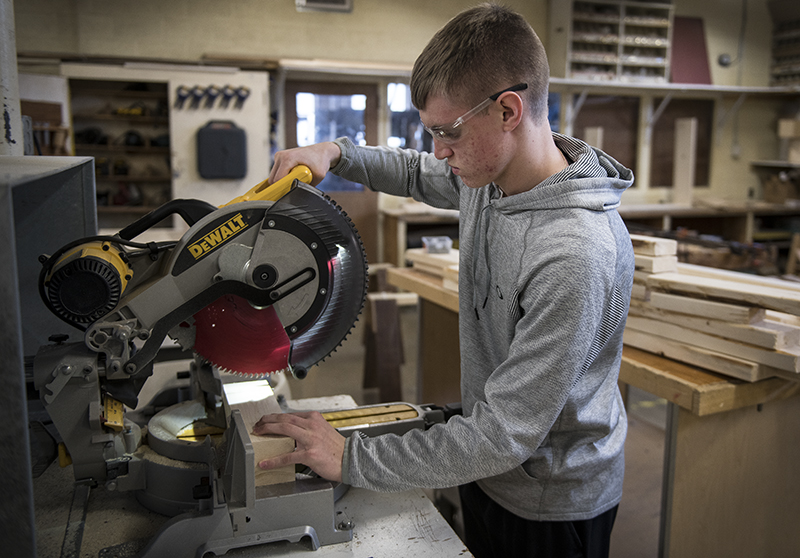 A NRHEG student works in the wood shop Thursday at the school. Upgrades for the career and technical classroom are part of a proposed school referendum up for a vote in April. - Colleen Harrison/Albert Lea Tribune

Emphasis placed on community support ahead of election

NEW RICHLAND — After a failed referendum in 2015, the NRHEG school district is asking voters to return to the polls in April and say yes to some of the facility improvements that didn’t make it through the first time.

Funds from the referendum would be put toward a secure entrance for the elementary school in Ellendale, building infrastructure work at both the elementary and secondary buildings, disabilities accommodations at both buildings, and science and career and technical classroom upgrades at the secondary level, said NRHEG Superintendent Dale Carlson. These priorities were identified off a list of 11 potential projects provided to the community for feedback in a 2018 survey and also came out of a facilities assessment conducted in 2017 by ISG.

“The survey was a significant part in … helping identify the priorities in order,” Carlson said.

The survey was a more formal solicitation of community opinion after task force members and community members participated in discussions on district needs, including breakout sessions with individual instructors, facilities task force member Rick Firme said. Firme lives in the district and his son is a NRHEG graduate.

“It was really kind of a melding pot of a lot of different people expressing opinions,” he said.

The superintendent said the district and community seemed to be in agreement on what is needed in the schools and supported in the community. 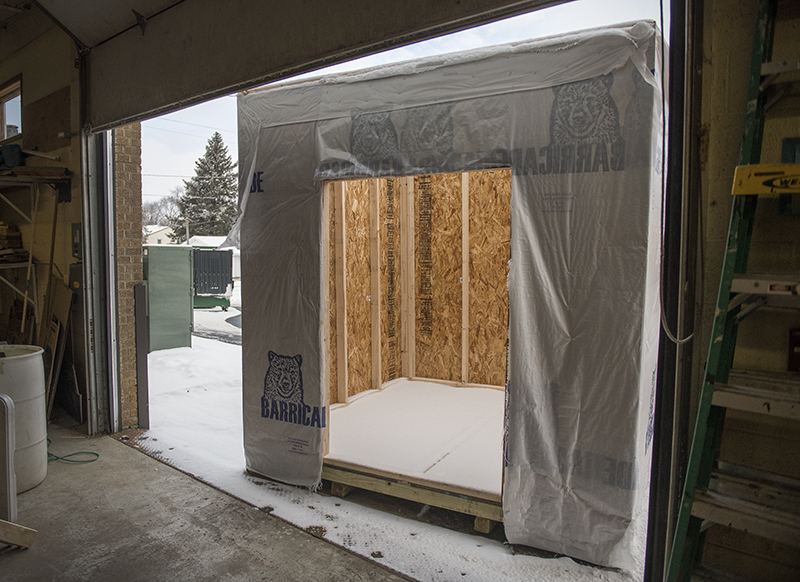 NRHEG shop students are running out of room in the current classroom, so much so that some projects are worked on outside of the building. – Colleen Harrison/Albert Lea Tribune

The sticker price, too, was determined by the 2018 community survey, which had 427 respondents and represented a 17 percent participation rate. In the survey, participants were asked how high a referendum cost they’d be willing to support. Nine million dollars came back as the “tax tolerance,” Carlson said.

The rest of the list — including work on special education facilities, preschool and child care, a STEAM makerspace, art and music classrooms, the weight room and collaborative learning spaces — will be saved for later. To complete the entire list would cost nearly $13 million.

For Firme, it was about identifying what the must-haves and the nice-to-haves were.

“Knowing what we’re about, we just had to kind of level back or pull back — ‘What are the best top five, top eight that our students need?’” Firme said. “And we just have to focus on that now.”

Work on the secondary school’s gymnasium and a performance space has also been tabled with no identified timeline as the district focuses on the current referendum. The gymnasium and performing arts space were included in the community survey, but separated from the referendum package. This is the main difference between the 2015 referendum and the one up for consideration this spring, Carlson said.

Firme said the cost of gym and performance art space work was also a consideration.

“We just felt at this time we didn’t want to overextend our taxpayers — ask for too much money,” Firme said.

According to survey results from 2016, which the district conducted in the wake of the unsuccessful referendum vote to identify community priorities, a majority of the respondents who were not in favor of the 2015 referendum cited the proposal for a new gymnasium as well as the tax impact as important to their decision.

The survey presented three options for consideration, with the second — constructing a new two-station gym, locker rooms and restrooms, converting the existing gym into a performing arts space and creating a flexible space for a wrestling and multi-purpose room — garnering the most support. The estimated cost of this option was also $9.1 million. However, none of the options, the most expensive of which was $9.75 million, received 50 percent support or more.

Carlson said work on a gymnasium and performing arts space needs continued research to be resolved.

“There is a commitment and a real interest to grow our arts,” he said. “… We know that there’s a need there.” 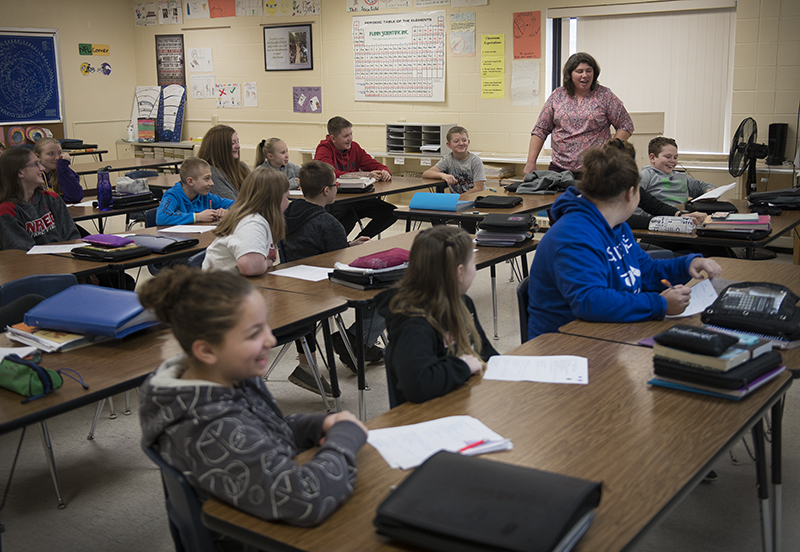 Students work Thursday in a NRHEG middle school science classroom. Funds from the referendum would be put toward a secure entrance for the elementary school in Ellendale, building infrastructure work at both the elementary and secondary buildings, disabilities accommodations at both buildings, and science and career and technical classroom upgrades at the secondary level. – Colleen Harrison/Albert Lea Tribune

However, there are issues already identified, including gym space too small to meet co-curricular programming needs, safety concerns during competitions due to size, inadequate sound and lighting in the gym when used as a student performance space, and improper ventilation in the secondary school’s wrestling room and locker room, which, since located in the basement, also come with Americans with Disabilities Act code compliance issues.

Should the referendum pass, Carlson anticipates most renovation work to occur during summer 2020. In the meantime, he said his focus is spreading information to the community about the project ahead of the vote. Community focus was also what he said the facilities task force focused on during the build-up to approve the special election.

“What was so important was the engagement — and the continued engagement — of the communities,” Carlson said.

Firme said from the community input the district received as well as the success of surrounding community referendums, he’s feeling positive about how the referendum could go.

“Where we’re going as a society, our needs based on our student population, I think all of those things made us feel really good about this having a good chance to pass,” he said. “… It’s not putting a huge burden on our community. We think it’s just the necessary items to keep our schools strong and our schools well-respected within our conference and the geographic area in which we live.”

The special election is April 9. 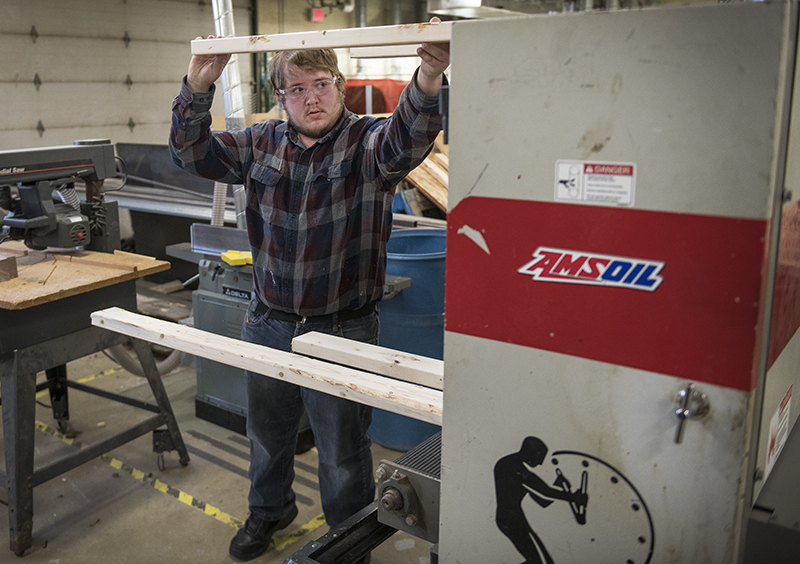 A NRHEG student works in the wood shop Thursday at the school. Upgrades for the career and technical classroom are part of a proposed school referendum up for a vote in April. – Colleen Harrison/Albert Lea Tribune