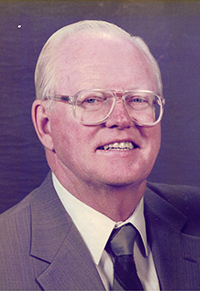 John was born Dec. 11, 1931, to Nora D (Kipp) and Edgar F. Westrum Sr. John William Westrum was the last of six children to join the family, and the fifth boy. The brothers enjoyed hunting and playing together all through their childhood and adult lives.

John graduated from Albert Lea High School in 1949, completed his bachelor’s degree in three years at the University of Minnesota and subsequently earned a Masters of Business Administration.

John married Janice “Cooki” Cook in 1952, and together they raised three children, John Jr., Roxanne and Keith. John initially joined his father’s business, Westrum Insurance, then worked at Smith-Douglass Fertilizer as office manager and Lea College as comptroller, all while living in Albert Lea. In 1968 he was employed at Jostens Inc. in Princeton, Illinois. After a brief time with Sather Cookie Co. as a vice president, he returned to Jostens Inc. in Minneapolis. In 1989 he joyfully took an early retirement. He was an Eagle Scout who exemplified the scout oath: “On my honor I will do my best, to do my duty to God and my country and to obey the scout law; to help other people at all times; to keep myself physically strong, mentally awake, and morally straight.”

This was evidenced in many ways, including John’s generosity with his time, his resources, his advice and his toys — kites, chainsaws, boats, snowmobiles, log splitter, trailers and trucks. Acts of service with and for others were a prominent part of his life, especially in retirement. He was an enthusiast of boating, water sports and pyrotechnics.

John was preceded in death by his parents; sister, Marion; and brothers Edgar Jr., Robert, Kenneth and Richard.

He is survived by his loving wife, Janice “Cooki”; his three children, John Jr. (and Judy) Westrum, Roxanne (and Jeffry) Thompson and Keith Westrum. He has influenced many and leaves a legacy of six grandchildren, Jason Westrum Ogdahl, Laura (Westrum) Hobbs, Deborah (Westrum) Tobias, Carolyn (Thompson) Finch, Thomas Thompson and Paul Thompson; and 10 great-grandchildren, soon to be 11. He is also survived by his sister-in-law, Elaine Westrum, and many loving nieces and nephews.

Funeral services will be at 11 a.m. Jan. 26. at Trinity Evangelical Free Church of Lakeville. Visitation will occur one hour before the service at the church. Burial will be at Graceland Cemetery in Albert Lea.