Knights fall to the Trojans 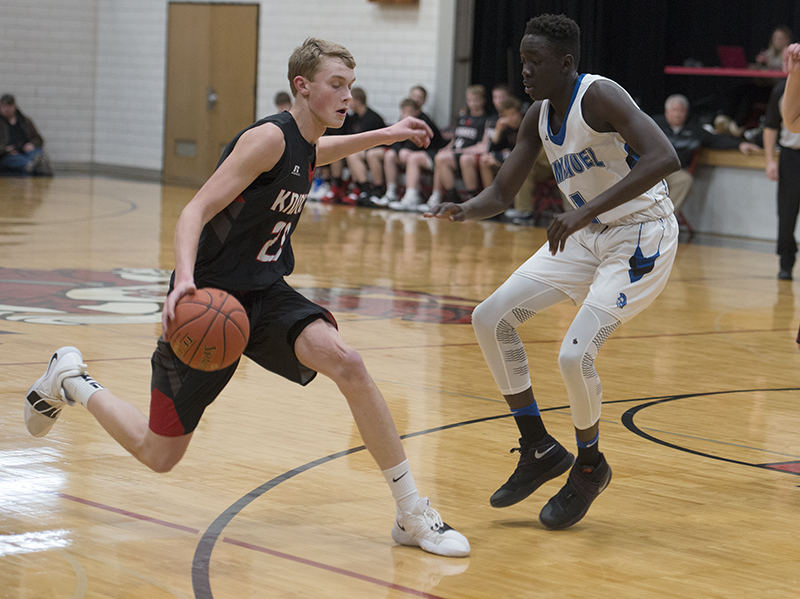 Alden-Conger senior Erik Theusch drives into the lane Monday night against Immanuel Lutheran. Theusch had 12 points in the loss to the Trojans. - Tyler Julson/Albert Lea Tribune

ALDEN — The Alden-Conger boys’ basketball team hosted Immanuel Lutheran on Monday night looking to build off its win over Madelia on Thursday.

The Knights were unable to carry over their momentum into this week, as they struggled on the offensive end of the court. The Trojans used a strong first half to pull ahead before ultimately downing the Knights, 70-59.

Alden-Conger stuck with Immanuel Lutheran through the opening minutes of the fist half. Senior Ryan Hansen was the main catalyst for the offense, getting some supporting help from junior Justin Nemec and sophomore Isaac Burgett.

Midway through the half the Trojans made their first big run of the game, jumping out to a 16-4 lead before Hansen stopped the run with a converted and-one opportunity. Despite the big play from Hansen, the Knights continued to struggle from an offensive standpoint. They seemed to have no trouble getting to the basket, however, a majority of their shots missed the mark.

Hansen and Burgett made a couple of back-to-back three-pointers, but the Trojans had already built up an impressive lead. 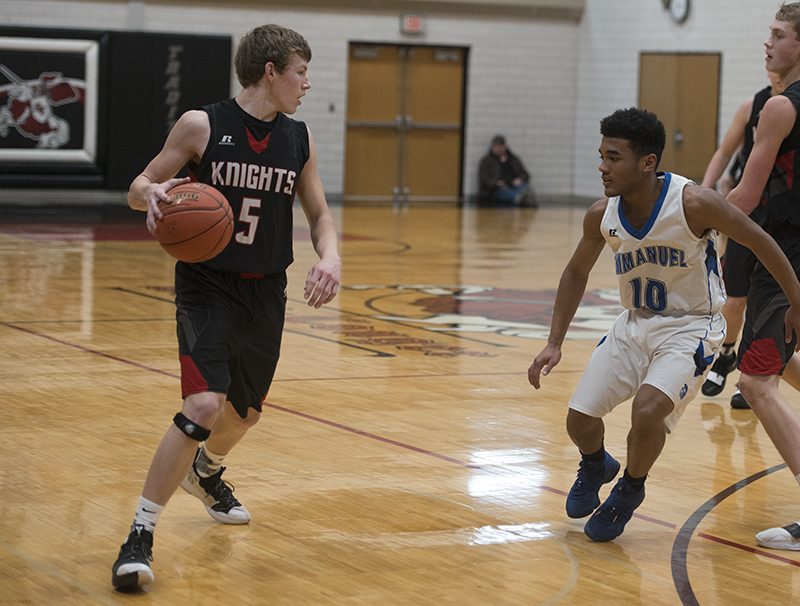 Immanuel Lutheran led at the half 32-21, with Hansen leading Alden-Conger in scoring with 10 points. Burgett had five, Nemec had four and junior Garrick Steele had two.

The offensive struggles continued into the second half for the Knights and the Trojans capitalized, going on a 13-2 run to open the half to get out to a 21-point lead.

Hansen continued to lead the way for Alden-Conger and senior Erik Theusch came to life late in the second half, pulling down multiple rebounds and getting on the board with a nice move under the basket and a three-pointer on back-to-back possessions. Theusch scored nine straight, which paired with two nice lay-ins from Hansen, bringing the lead back down to single digits with just under three minutes remaining.

The comeback effort would fall short, however, as the Trojans found their footing and held on to the lead through the final minutes.

Hansen led the Knights in scoring with 26, with Theusch coming in second with 12. Burgett had eight, senior Adam Skov had five, Nemec had four, and Steele and sophomore Derek Miller each finished with two.

The Knights fall to 2-7 on the season and will play two more times before the week is out. Tuesday they travel to Mankato Loyola to take on the 6-6 Crusaders, and Friday they will host the 3-9 Clippers of Cleveland.