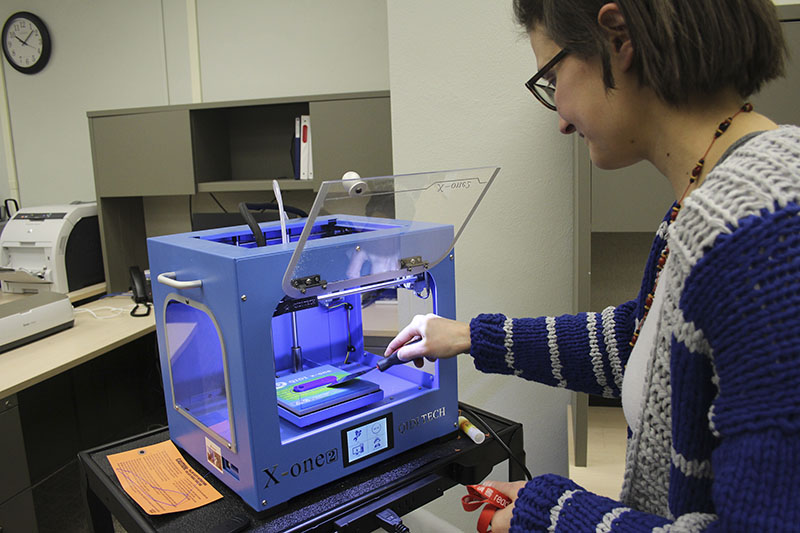 Albert Lea Public Library Assistant Library Director Annice Sevett uses a metal spatula to remove her keychain from the printer upon completion. The keychain is still warm to the touch, like a freshly printed sheet of paper. Printing a keychain liek Sevett’s takes about 25 minutes for the library’s printer. Sarah Kocher/Albert Lea Tribune 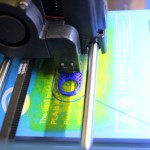 The 3D-printed item is made from plastic, packaged in a roll that feeds into the printer, melts down, and then extruded to print, layer by layer. Sarah Kocher/Albert Lea Tribune 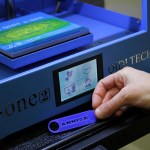 Annice Sevett, assistant library director at Albert Lea Public Library, has practiced printing with the library’s 3D printer ahead of the Feb. 5 and Feb. 26 classes, which will allow community members to design and print their own keychains. Sarah Kocher/Albert Lea Tribune 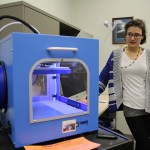 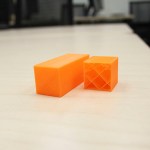 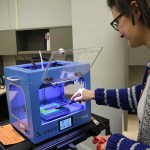 Albert Lea Public Library Assistant Library Director Annice Sevett uses a metal spatula to remove her keychain from the printer upon completion. The keychain is still warm to the touch, like a freshly printed sheet of paper. Printing a keychain liek Sevett’s takes about 25 minutes for the library’s printer. Sarah Kocher/Albert Lea Tribune

Under a thick, spindle-like arm, a palimpsest of warm blue plastic grows minutiously.

At the end of its 25-minute labor, the 3D printer, about the size of a small microwave, will produce a keychain identical to the one holding court on Albert Lea Public Library Assistant Library Director Annice Sevett’s keychain.

The 3D printer is the library’s, and Sevett has been practicing with it ahead of the first of two introductory classes the library has on the books, intended to introduce the public to a 3D printer in action.

“We’re just, you know, fortunate and excited to bring this technology to the community so people can experience it,” Sevett said.

The library acquired the printer in the fall, Library Director Peggy Havener said.

“The main goal was that we like to keep abreast of the technology, and it’s new technology,” Havener said.

According to Sevett, the program plays well into the library’s “big three”: information, technology and community. Furthermore, working with a 3D printer is something many community members may not have the opportunity to do if they aren’t working in industries who utilize that technology, she said.

So at the library, they can. Members of the class will be able to design their own keychains, similar to Sevett’s or different.

“They’re fairly simple to design, and they’re useful,” she said.

The program will include an overview of 3D printing, examples of its uses in the world — think prosthetics and car parts, Sevett said — and an introduction to Tinkercad, a free online software for creating 3D design. Sevett said Tinkercad is user-friendly, with pre-designed shapes should users prefer to use them.

Sevett herself has been familiarizing herself with the program, as well as with the software necessary to communicate between Tinkercad and the 3D printer. Her tests have included the keychain, but also a knitting needle gauge. Next, she’s going to work on a business card holder.

It’s been a learning curve, Havener said. Sevett said she’s made things that didn’t work out the first time, printing random configurations of plastic she’s had to stop.

But the library is also learning how the technology is applicable to everyday life, and for its own uses, Havener said. The library can use the printer to create giveaway prizes. Still, the main function is public education. Havener said the library will continue to hold introductory classes.

Because of the time the printer takes to produce the keychains, class attendees will not see their designs printed the day of the class.

“That’s the one thing about the 3D printing class,” Sevett said. “It’s not like an immediate gratification.”

Instead, Sevett will print the keychains throughout the following week, setting up times participants so they can come in to see their keychain being made, should they want to.

The class size will be limited to about six or seven people, Sevett said.

“The community’s very interested in learning about new technology,” Havener said. “That’s an important part of what we do, and this is just another type of technology to learn about.”

What: Introduction to 3D Printing