An Albert Lea man allegedly caused a woman he knew to lose consciousness Tuesday while strangling her, according to Freeborn County District Court records. 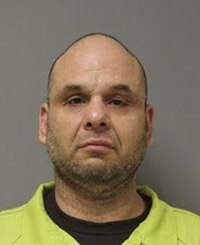 Court documents state Saavedra was charged after officers were dispatched to an open 911 call Tuesday.

He allegedly had fresh cuts and blood on his hands, and there was broken glass on the floor. There were reportedly red marks on both sides of the alleged victim’s neck.

At one point, Saavedra allegedly picked the woman up by her shirt and threw her across the room. He allegedly threatened to kill her during the incident.

Court documents state Saavedra was convicted of inflicting corporal injury on a spouse/cohabitant in 2010 in California.

Assistant Freeborn County Attorney Abigail Lambert requested Judge Ross Leuning set conditional bail at $25,000 because of the allegations in the complaint, the alleged victim’s allegations that Saavedra uses meth on a daily basis and that she is scared of him.

Lambert said Saavedra has lived in Albert Lea since August and has past connections with California and New Mexico.

Lawyer Grant Sanders requested Saavedra be conditionally released on his own recognizance, adding drug use allegations made by the alleged victim need to be taken lightly because Saavedra works approximately 40 hours per week. He said Saavedra has family in Albert Lea and moved to the community approximately one year ago to take care of his mother.

He said Saavedra does not want to lose his job over the case.

Leuning set conditional bail at $20,000, contingent on Saavedra engaging in no assaultive behavior, submitting to random testing, not using or possessing firearms or dangerous weapons, not using alcohol or controlled substances and following other court requirements.

Saavedra’s next court appearance is scheduled for Jan. 24.