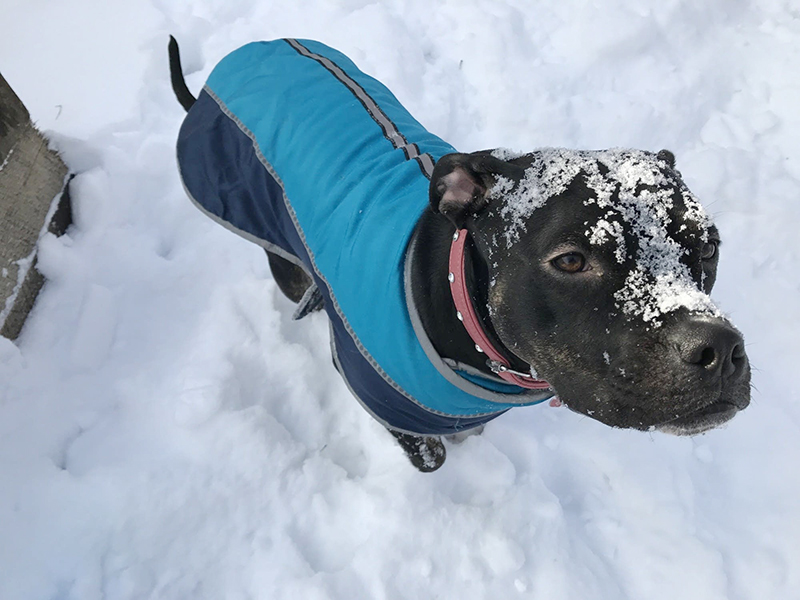 Maybelle the dog stands in the snow, equipped with her jacket and boots. Experts suggest dog owners dress their dogs for the cold weather, and even then only take them outside for brief periods of time. - Jon Collins/MPR News

Minneapolis animal control officials are warning people not to leave their pets in their vehicles during the coming subzero cold snap, and they’re warning that the city will be aggressive in rescuing animals.

Pet owners should not leave their animals in a vehicle for any length of time, and pets found left in the coming days will be taken into “protective custody,” said Caroline Hairfield, director of Minneapolis Animal Care and Control.

“Animal control will strictly enforce what we call adequate care codes” if the animal is believed to be in danger because of the weather conditions and circumstances, she told MPR News.

“We will take it into protective custody and that could mean that we break your window to get your dog out,” she added. “So, don’t put yourself in that position because we’re going to do what we have to do to protect the animal.”

Dogs are particularly susceptible to frostbite on their feet, ears and face, she said, adding that animals should only be taken outdoors briefly, when absolutely necessary, during bitterly cold weather.

How do you keep your pets warm in frigid temperatures?

“You can put little doggie slippers on them that they make now, or you can even put petroleum jelly on their feet to keep them protected from the chemicals that we’re putting on the street, which also cause irritants to their feet,” Hairfield said. “But, yeah, take em’ out, let them go the bathroom and then bring them back in.”

The Twin Cities National Weather Service office is forecasting extreme cold Tuesday through Thursday morning, with the coldest conditions expected Wednesday morning with minus 60 to minus 40 wind chills, which can cause frostbite on exposed skin in as little as five minutes.