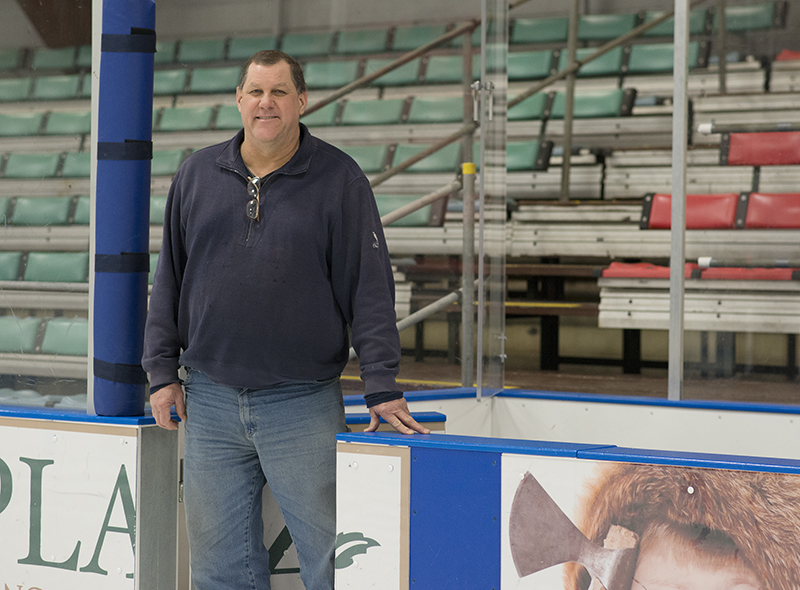 Mike Carlson started coaching hockey in northern Kentucky in 1990. After moving to Albert Lea in 1999, Carlson has continued to coach, including three years as a varsity assistant and as head coach of the A-Bantams since 2002. - Tyler Julson/Albert Lea Tribune

A-Bantams head coach has had a long history of hockey

For his entire life, hockey has been a major part of Mike Carlson’s life.

Born in St. Paul and moving to northern Kentucky at a young age, Carlson played high school and club hockey in Cincinnati. He then played one year of low level club hockey in college before taking a few years away from the sport.

Starting in 1990, Carlson came back as a coach for a couple years in the Cincinnati area, until  August 1999, when he took a job in Albert Lea as the superintendent at Green Lea Golf Course. Within a few short weeks of working at the course, Carlson met legendary Albert Lea hockey coach Roy Nystrom.

“I met Roy, the previous coach, who had been here for eons, at the golf course right away,” Carlson said. “I told him I coached hockey and this and that, and he said, ‘Oh, you’ll work with me then,’ and that was it. So for three seasons I worked with him, and then I took over the A-Bantams program.”

Since 2002, Carlson has remained on as the head coach of the A-Bantams and has no plans to step down any time soon. He credits the children he coaches as the reason he keeps coming back year after year. He said the players are at an age where it really feels like he’s making an impact on the their lives.

Carlson said the special community that Albert Lea has revolving around hockey is something he has never been a part of before.

“We really have a special hockey community here,” he said. “I’ve gotten to know a lot of people in the hockey community through the entire southern tier of Minnesota, and Albert Lea is highly respected. We always put a good product on the ice — we have our ebbs and flows — but for the most part we always put a really good product out there. It’s a real pleasure to be a part of that.”

The constant productivity of the hockey program is made even more impressive when coupled with the fact that it has to compete for athletes with the wrestling team, which is also a top program in the state.

With nearly 30 years of coaching experience under his belt, Carlson said the biggest difference in the game from when he started to now is the parent interaction. He said he’s lucky to not encounter many negative parent interactions in Albert Lea, but he sees it almost everywhere else he goes. Carlson said he has seen coaches come and go over the years, solely because of the overwhelming criticism they’ve received from parents.

Despite having a positive relationship with many of his players’ parents, the job still comes with a couple difficulties. Carlson said one of the most difficult aspects for him is trying to make sure all of his players are having fun.

“You can win a lot of games, but if the kids aren’t having a lot of fun it’s not worth it,” he said. “We just want to make sure the kids are having fun. At the end of the year, we want it to be an enjoyable experience. You like to hear back from them when they’re in college or even after that saying, ‘Gosh, my bantam years were the best years I had.’ That’s the greatest thing you can hear.”

On the flipside, Carlson said there are many positive parts of the job that far outnumber the pains of coaching. He said the relationships he has developed with both Nystrom and current head boys’ coach Jason Fornwald have been one of the best things to come out of his coaching career. Coaching with Nystrom was a life-changing experience, according to Carlson.

Also, the ability to watch as the players he once coached grow into varsity players, and some beyond, is one of his favorite aspects.

“Going to the high school games is always fun,” Carlson said. “Watching the kids and seeing them develop into great players. The leave my program, but they’re still right there. I can talk to them before and after games and still drop some hockey on them. That’s by far the best — it makes it fun.”

Some of his favorite years of coaching were when he had the opportunity to coach his two sons in the program and when his daughter was a manager for one of the girls’ teams.

“We’re a hockey family for sure,” Carlson said.

When he isn’t coaching hockey, Carlson spends a lot of his time working at the golf course. Sometimes with the busy season starting as early as March and finishing as late as November, his work schedule syncs nearly perfectly with his coaching schedule. He said a lot of coaches can’t get as much ice time in the winter because their job prevents it, but as a golf course superintendent, he can focus almost solely on hockey in the winter.

“Hockey people are a special community,” Carlson said. “When you get hockey people together, there’s a certain respect there. Hockey is kind of known as a fighter’s sport, but I don’t think people outside the sport realize the respect that the players have for their opponent after the game. That’s the great thing about hockey.”

Interesting fact: Carlson is an avid mushroom hunter and eater. He said he probably eats mushrooms with his meals about 355 days a year