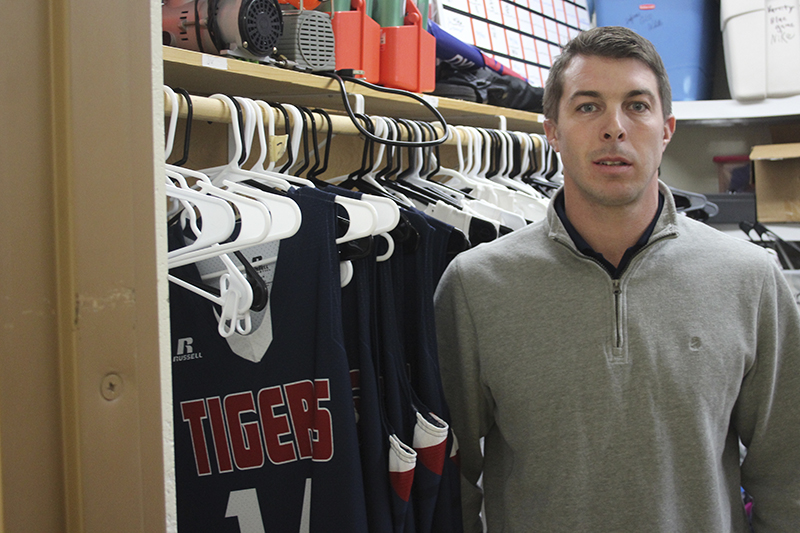 Paul Durbahn stepped into the interim activities director position and stepped out of the classroom to do so. He is continuing on as the head wrestling coach. - Sarah Kocher/Albert Lea Tribune

Wrestling coach excited at chance to work in administrative capacity

After several years in a coaching capacity with both the Albert Lea wrestling and baseball programs, Paul Durbahn has transitioned to a utility player position as interim activities director.

“Being an AD is something I’ve always had aspirations for,” Durbahn said.

As an interim, he said he doesn’t plan to make drastic changes, especially after coming in to a role he sees already in a good place. He sees his role as a supportive one for coaches, students and booster clubs.

“Just to keep the ball rolling is important to me at this point,” Durbahn said.

Although he doesn’t feel quite ready to be done in the classroom — Durbahn, a geometry teacher, said he loves it — heading toward an administrative position was a professional growth goal. He just earned his master’s in education from Augustana University in December.

Durbahn grew up in Mankato, where his father was a football and wrestling coach.

“Growing up around sports, being on the playing field, wrestling mat and coaches’ offices is what sparked my interest,” Durbahn said.

He wrestled, played football and competed in track. During the summer, he played baseball. He wrestled for two years at South Dakota State University, where he attended college. He taught and coached in Springfield before coming to Albert Lea Area Schools.

During his time with the district, he said he has become familiar with a lot of the activities it offers. He was also a fall events coordinator in 2013, so he has some background working with some of the components of the job. Still, there’s plenty to learn.

“I have great supports here that have helped me with the learning curve,” Durbahn said, mentioning the administration, coaches, other athletic directors in the Big Nine Conference and office staff at the high school.

“He’s super passionate about providing students with opportunities both in athletics and extracurriculars, so I think that was a huge selling point,” Grossklaus said.

After June 30, the position will be reassessed, Durbahn said.

“If I’m needed back in the classroom, I think that’s where we’ll go,” he said. “If this is an opening that they’d like to see me (in) in the future, I’d be willing and glad to step up and fill that role.”

In the meantime, he intends to provide for students the things that made activities a good experience for him as a student athlete.

“You want those same supports for kids, and you know I’m a firm believer that activities and athletics, if kids are out for those, they’re much less likely to go down the wrong path,” he said.

Family: wife, Kelsey Durbahn; the couple is expecting a baby in May

Interesting fact: when he has time, Durbahn likes to hunt and fish