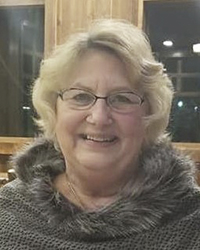 Robyn moved from Montevideo in August 1963 to Bismarck, North Dakota, where she graduated high school. She then moved with her parents to Fargo, North Dakota, and married Larry A. Davis on Aug. 17, 1968, in Montevideo. Larry enlisted in the Air Force and they moved to Plattsburgh, New York, where they had their first son, Blake. Larry spent a year in Vietnam and was stationed in Grand Forks, North Dakota, when he returned. There, they had their second son, Aaron. After Larry’s service of four years in the Air Force, they moved to Albert Lea, where Robyn’s mother and brother were living.

Robyn, Larry and the family spent almost 35 years in Albert Lea raising their kids. Their oldest son, Blake, passed away in May 2004, after which Robyn and Larry decided to move to Shoreview, a northern suburb of St. Paul, to be closer to their younger son, Aaron.

Both Robyn and Larry retired after working a few more years in Shoreview. Robyn in her younger years was active in sports, both watching and participating. She played softball and volleyball, loved to play poker, read and go to or watch Twins and Vikings games. She did recreational writing and loved to sing and dance.

Robyn was preceded in death by both sets of grandparents; her parents Phyllis and Harold Veiman of Albert Lea; brothers-in-law William Schuler of Granite Falls and Lanny Saumer of River Falls, Wisconsin; son, Blake Davis,  of Belle Plaine; brother, Brian Veiman, of Pittsburgh; and sister, Lorna Wagner, of Belle Plaine.

Robyn is survived by her husband, Larry Davis; son, Aaron Davis, and his wife, Michelle; mother-in-law, Shirley Davis, of Montevideo; sister-in-law, Dawn Shuler, of Granite Falls; brothers -in-law Walter Wagner and Garry Bye; sister-in-law, Cherie Veiman; many nieces and nephews and their families; aunts and uncles; cousin, Ken Saumer, and family; and many special friends who have supported her for many years.

Robyn would have liked to be remembered for her sometimes odd sense of humor, her sarcasm and antics. She loved to make people happy and loved so deeply.

She was a child of God and had strong faith. When faced with her disease, Robyn put all her trust in her Lord.

Funeral services are at 2 p.m. Monday at Holcomb-Henry-Boom-Purcell Funeral Home at 515 Highway 96 W. in Shoreview. Visitation will be from 2 to 4 p.m. Sunday at the funeral home as well as and one hour prior to the service. Private interment will be in Fort Snelling. Memorials are preferred to the Animal Humane Society of Minnesota.