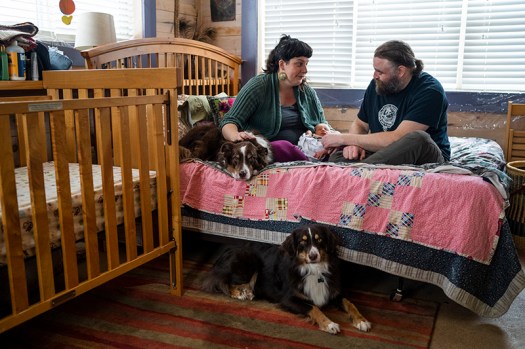 New parents Erin Petz and Matt Tyler sit with their newborn, Corwyn, and their two dogs in their Grand Marais bungalow. The couple found planning for Corwyn’s birth anxiety-inducing, knowing the drive to the hospital in Duluth could take more than two hours. - Evan Frost/MPR News 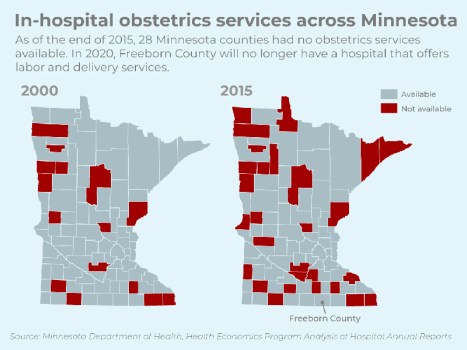 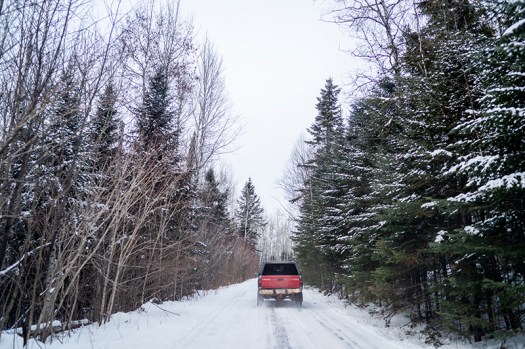 Tamer Ibrahim drives his Toyota Tacoma down the miles long drive to his remote home outside of Grand Marais in December. Ibrahim plows the road himself. - Evan Frost/MPR News 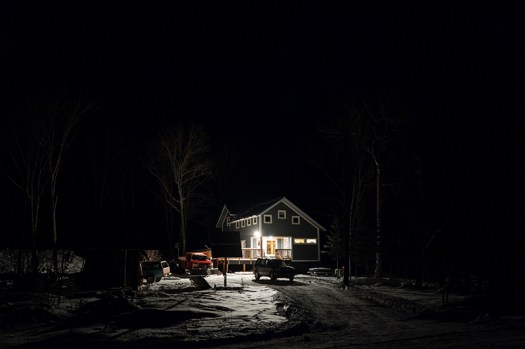 The home of the Ibrahim family sits in the dark outside of Grand Marais on Dec. 4. - Evan Frost/MPR News 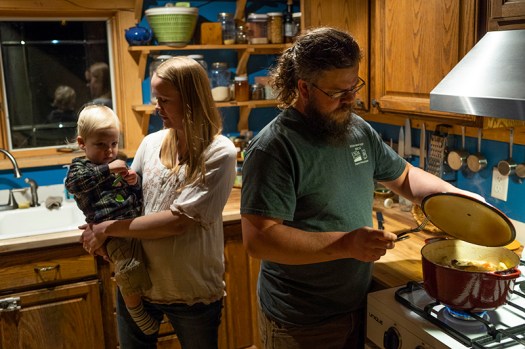 Yvette Ibrahim holds 2-year-old Zein while her husband, Tamer, heats up dinner inside their home outside of Grand Marais. - Evan Frost/MPR News

Living deep in the Minnesota woods near the Canadian border, Tamer and Yvette Ibrahim took pride in being ready for whatever the wilderness could throw at them.

Then came baby Zein, a blizzard and a white-knuckle ride to the hospital.

Yvette Ibrahim’s complicated pregnancy created unexpected challenges, including five-hour drives to Duluth and back each month for checkups. It was mostly manageable until the December 2016 night when her water broke. Heavy snow blew across the Arrowhead darkness, but Zein wouldn’t wait.

With their phones knocked out by the snow, the couple felt they had to chance it. Taking off for Duluth at 1 a.m., they made it to the hospital four harrowing hours later.

Yvette Ibrahim delivered Zein safely after 46 hours in labor. But sitting at home recently, her 2-year-old on her lap, she wondered about the treacherous ride that could have been avoided had there been a birthing hospital closer to home.

Eighteen months earlier, the Ibrahims might have been able to drive to Grand Marais to deliver at North Shore Health hospital. North Shore, however, stopped delivering babies in 2015 — part of a troubling trend that’s left rural providers and small-town leaders frustrated across Minnesota and the country.

A growing number of rural hospitals will not do planned baby deliveries, citing legal and insurance costs. There are also the challenges of attracting doctors to small towns and the demands of hospital systems to consolidate birthing centers. All these spring from a fundamental problem: fewer rural babies.

It’s a cycle that’s created cascading problems for rural communities and couples, delivering new risks for pregnant women who must travel hours to deliver and making it that much harder to keep young adults in small town Minnesota.

Grand Marais sees that firsthand. While North Shore still handles many of the community’s health care needs, ending deliveries opened the door to a civic dilemma with no easy solution.

‘Sobbing in front of the nurse’

Towns across Minnesota and the country are dealing with similar pressures. The number of hospitals in the state offering birth services fell by nearly 18 percent between 2000 and the start of 2015. Rural Minnesota has been hit the hardest: 15 of the state’s rural hospitals stopped delivering babies in that time — a nearly 38 percent decline.

That’s brought longer drives and bigger worries for would-be parents. One recent University of Minnesota study found a huge jump in anxiety when the Grand Marais and Ely, Minn., hospitals stopped providing labor and delivery services in the summer of 2015.

Research suggests a lack of access to rural obstetrics care nationally is associated with a higher rate of preterm delivery and infant mortality. Canadian researchers have found women who live more than two hours from a hospital are more likely to have labor induced for logistical reasons, though inducing can complicate birth. They’ve also found higher infant mortality when mothers live more than four hours from a hospital.

Nationally, more than half of rural counties lack obstetrics care, and the number is rising as rural hospitals struggle with pressures that are forcing many to close altogether. Rural areas where people are poorer, of color, in worse health and more likely to be on low-paying public programs are more likely to lose health services.

“These factors all work together to render some communities deeply vulnerable to poor outcomes around the time of childbirth,” said University of Minnesota professor Katy Kozhimannil, who studies rural health care trends.

“And when I say something like poor outcomes around the time of childbirth, I’m not sure that fully conveys the tragedy of losing a mother or losing a baby,” she added. “It can destroy a family, can destroy a community, and it’s happening more often in some communities than others.”

It can be a nightmare when a baby comes early and the birthing center is hours away.

Erin Petz said her 2018 pregnancy in Grand Marais was uncomplicated, which meant she could do most of her prenatal care there with familiar doctors. Still, it was hard to tamp down her anxiety over a 110-mile drive to the hospital in Duluth.

“I was, like, sobbing in front of the nurse and the doctor,” she said, recounting an earlier clinic visit. “What is the plan going to be like in case I go in early?”

Then her labor started early. It was hard to decide if what she felt was real or a false alarm. With North Shore Health no longer offering birthing services, she went to the hospital’s emergency room for guidance. The doctors urged a trip to Duluth in an ambulance.

“We kind of fought them a little bit on the ambulance thing,” she recalled. “Just because the thought of being strapped down for two and a half hours while having contractions on a bumpy highway sounded miserable … It was not pleasant being strapped down.”

Corwyn, their first child, was born in Duluth in November, a few weeks ahead of schedule and healthy but with complications. Corwyn was jaundiced, a common condition in newborns. As they got ready to head back to Grand Marais, the Duluth pediatrician told them the baby might need light-therapy treatment, which is standard care in urban hospitals, but not in Grand Marais.

Corwyn did need light therapy, so the couple drove back to Duluth with their 3-day-old only to have their car break down. Luckily, they had cellphone reception and called for help.

Petz’s husband, Matt Tyler, said he accepts the risks that come with living in a remote part of Minnesota but believes rural health care challenges are bigger than people in the Twin Cities realize.

“If we want our rural communities to be strong and to carry on, that gulf needs to get closed somewhat,” said Tyler, 37. “Otherwise these communities are going to die if there’s no way to have babies here.”

Maternity care is expensive to provide. It’s a common refrain when the discussion turns to why hospital labor and delivery services are disappearing in rural Minnesota and even some smaller cities.

North Shore Health stopped doing planned deliveries in Grand Marais in 2015 because it couldn’t afford the added staff, equipment and training to do a cesarean section — an emergency procedure to rescue a birth going badly. Its insurer warned it was out of compliance with current medical standards.

But the pressure to be C-section ready had the perverse effect of stranding Grand Marais women two-plus hours from a place they could deliver, changing medical risks rather than reducing them as intended.

The hospital felt it had no good options, said Kimber Wraalstad, North Shore’s administrator. It could keep delivering babies without offering C-sections and risk a devastating lawsuit if something went wrong. Or, it could build an operating room and staff it round the clock.

Wraalstad said that would have cost $1 million more each year in a hospital that was averaging only 10 births a year and has many other needs. Plus, the new obstetrics team wouldn’t be able to keep up its skills.

“It’s not that a decision like this comes easy,” she said. “The funnest thing that I used to do was to sign the birth certificates with these little bitty feet on them. But that’s second to the safety of those little itty-bitty feet.”

Elsewhere, changes are happening because decisions about the services hospitals provide are increasingly out of the hands of residents.

Albert Lea found that out two years ago when Mayo Clinic, which operates the town’s local hospital, said it would close the maternity ward and move baby delivery and other services 30 minutes east to Mayo’s Austin, Minn., campus. The news brought protests from angry residents. Mayo, though, said too few babies were being born at Albert Lea, contributing to millions of dollars lost between its Albert Lea and Austin facilities.

Obstetrics can be a money loser for hospitals when the number of births is low, said University of North Carolina health care finance expert George Pink.

The financial realities reflect a growing reluctance to shoulder the medical, financial and legal risks of a delivery that goes badly, said Dr. Jenny Delfs, who also practices in Grand Marais.

And it’s not just insurance companies looking to shed risk. Mothers in Grand Marais, for instance, were increasingly choosing to deliver in Duluth because pain-reducing epidurals and C-sections were available there.

“Birth hasn’t changed,” Delfs said, “but our society’s tolerance for risk has changed.”

Efforts to ease risks for people and institutions have also brought unintended risks, including unexpectedly having babies in the North Shore Health emergency room, which isn’t fully equipped for delivery.

“It felt like we took the risk off the hospital insurer,” Delfs said, “and we put that risk both on my patients, and took some of their choice away, and put some of that risk back on me.”

‘Why is this happening to us?’

The decision to end obstetrics services has been hard on Grand Marais.

He’s heard concerns repeatedly about the long trip to Duluth for pregnant women, and the worries about what the end of local baby delivery might mean for Grand Marais.

“I don’t know if calling it a maelstrom would be out of line,” he said. “There’s a lot of pride of place up here.”

The town weighed ideas to ease the situation for families, like providing a house in Duluth where pregnant moms can stay or encouraging employers to accommodate women who need extra time for doctor visits in Duluth. But it’s been difficult, Arrowsmith DeCoux said.

He said he understood the hospital’s decision and couldn’t blame its board or insurer, but that delivering babies who went on to grow up in Grand Marais was one of the best parts of the job.

Today, Grand Marais physicians focus on preparing patients to give birth hours away from home.

Dr. Kurt Farchmin often talks to his patients about the early signs of labor because he doesn’t want them wasting precious time going to the Grand Marais emergency room, especially in the winter.

“We really lay out what early labor looks like and say, ‘If you feel that this is happening, just get in the car and get to Duluth,’” he said.

Now 34 and 42 years old, Yvette and Tamer Ibrahim are preparing for the arrival of their second child.

Yvette Ibrahim, a biologist who traps and tracks wolves in the North Woods, said she’s still nervous about the drive to Duluth, although this time she hopes it won’t start at 1 a.m. in a blizzard.

They’re looking for better ways now to manage the hazards and anxiety that come with being pregnant so far from Duluth. One option is to use some vacation time to stay in Duluth a few days before the due date. Time off, though, is a luxury for many people in remote northern Minnesota, Tamer Ibrahim noted.

“For people struggling more financially or (who) don’t have resources like friends and family to help out,” he said, “it becomes a huge challenge not having that kind of care up here.”