‘They’re still part of your life’ 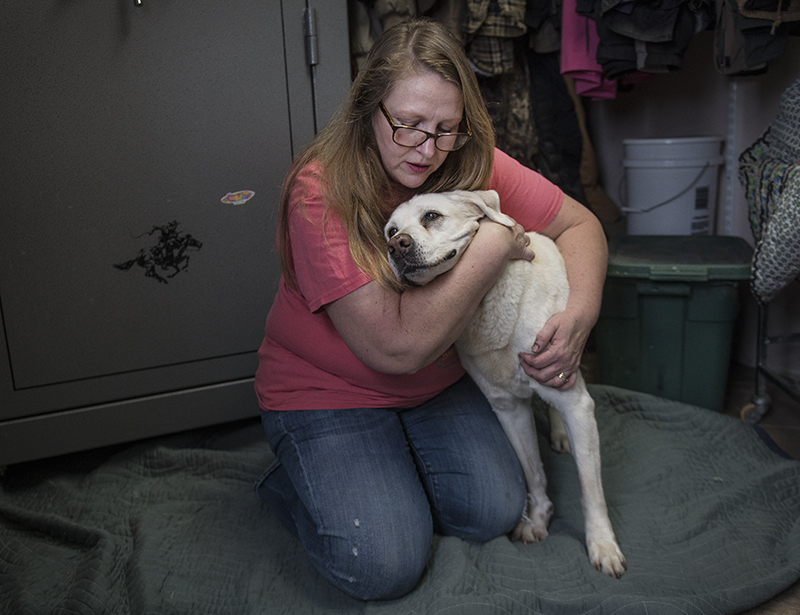 Tammy Hall holds her dog Cracker, who along with her other dog, Daisy, were rescued by family and friends after being stuck in a culvert for two days. - Colleen Harrison/Albert Lea Tribune

Dogs saved after being trapped in culvert for 2 days

JOICE, Iowa — The two Hall family dogs, Cracker and Daisy, rest in the house as snow falls outside Friday afternoon.

The dogs are recuperating after being rescued from a nearby culvert after two days of being missing, thanks to the work of family and friends.

Cracker, 14, and her daughter, Daisy, 7, were on a routine run Monday morning when they became stuck in the culvert a quarter of a mile southeast of their home, 24214 375th St. in rural Joice.

“They were just out doing their morning run and following the creek down, and I’m assuming they must have chased something down the culvert, and they couldn’t get out,” Tammy Hall said. “Culvert’s under a farm entrance, field entrance, so one part of it was pretty open, and the other part of it was probably three quarters of the way sealed up, so they crawled in forward as far as they could go and just got stuck.” 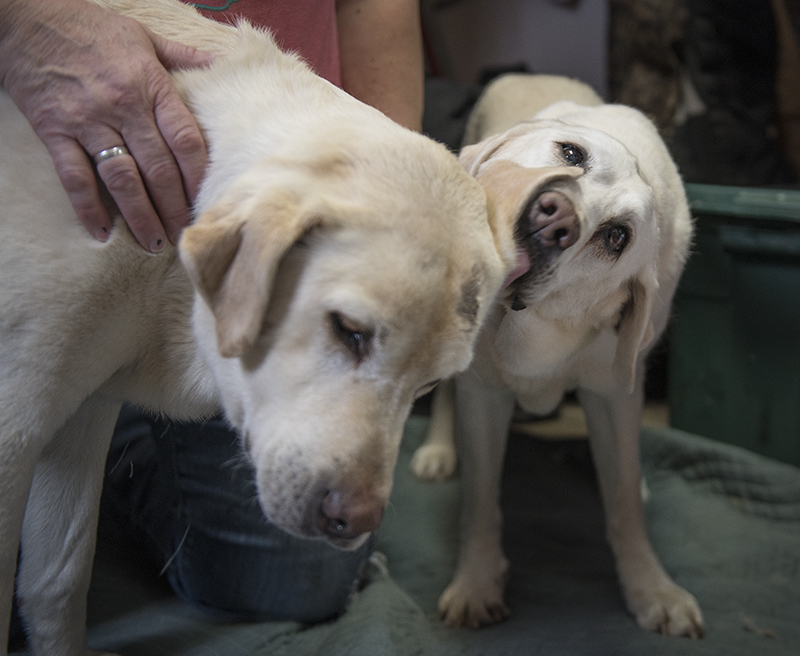 She said she first noticed they were missing at about 10 a.m. Monday. Shortly after, she began driving and calling neighbors, who also started looking. She called humane societies, pet sanctuaries, Worth and Winnebago County sheriff’s offices and posted the dogs were missing on Facebook.

“By that evening I figured somebody had picked them up, because nobody had seen them at all around here,” she said.

At around 3 p.m. Wednesday, Hall’s neighbor Bruce Buffington, who recently had back surgery, heard the dogs in the culvert and called his brother, Bob Buffington, who called Tammy Hall and told her one dog was found.

Tammy Hall remembers driving to the scene and calling her husband, Tracy Hall, and son, Andrew Hall, to tell them they needed to bring tools to free the dogs.

The men and local resident Jim Lebad freed the dogs after about an hour of cutting and prying approximately 6 feet of dirt and pipe in the culvert.

When the dogs were found, Daisy’s face was reportedly on Cracker’s backside. 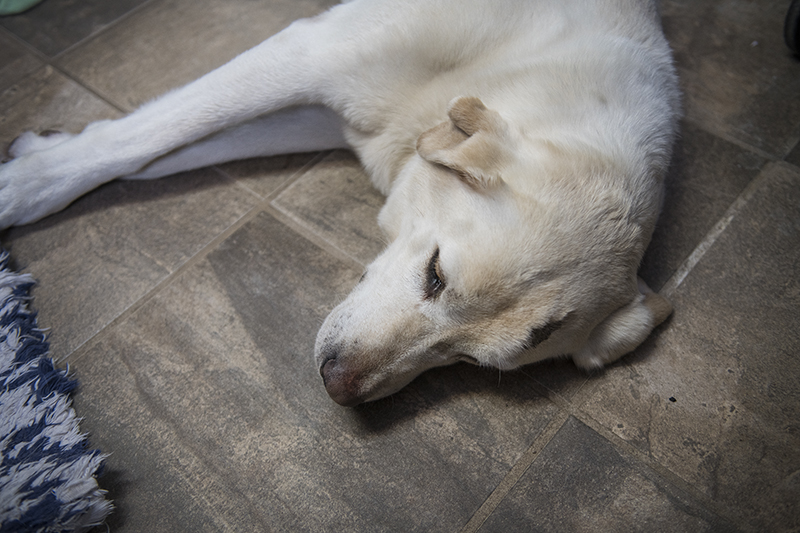 Cracker and Daisy, pictured, have been keeping close to their family and looking to stay inside since being reunited with their owners. – Colleen Harrison/Albert Lea Tribune

“They were kind of hunched up, so their shoulders were to the side, but stuck in that position,” Tammy Hall said. “They couldn’t really move forward or backwards … it was pretty muddy where they were, so I am assuming their body heat just kind of melted everything in there.”

Following the removal of the dogs, Tracy Hall placed Cracker, who couldn’t move immediately after she was rescued, in the car, and she was taken to the vet.

Tammy Hall said ever since they were rescued, Daisy and Cracker have mainly stayed inside.

“They don’t go too far away from us,” she said.

“It’s just so overwhelming, the kindness and God’s grace.”

Tammy Hall, who owns a boutique and a hair salon, noted the extensive outreach community members have given her. Her Facebook post announcing the dogs were found garnered 400 responses, 148 comments and 75 shares as of Friday afternoon.

Tammy Hall noted how important the dogs are to her. 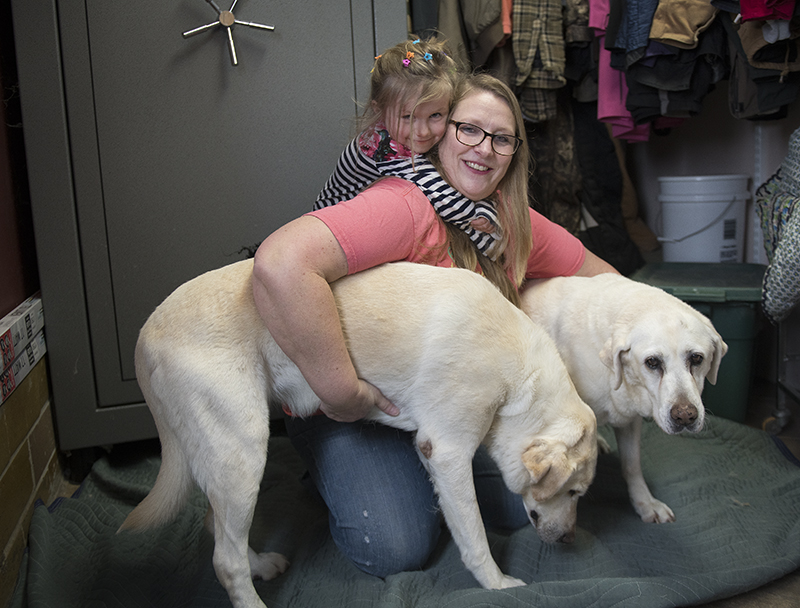 Tammy Hall poses for a picture with her dogs and granddaughter. Hall’s dogs were missing and trapped in a culvert for two days. – Colleen Harrison/Albert Lea Tribune

“They can drive you crazy at times, but when they were gone, I could not sleep at all,” she said. “I just cried.”

The family bought Cracker as a puppy when Andrew Hall was an eighth-grader.

“She’s kind of my first dog,” he said. “I was just happy that they were both alive.”

He noted how important the two dogs are to the Hall family.

“They grow on you,” he said. “Even though they are not, quote and quote, ‘human,’ they’re still part of your life and there for you.”

Tammy Hall said she enjoys watching the dogs play with her grandchildren. She said she is proud of her family and neighbors and noted what was said on one share on Facebook.

“It’s sweet, on one of the shares people are calling them heroes,” Tammy Hall said. “I just think that’s just sweet to know that my son and my neighbors are heroes, my husband.” 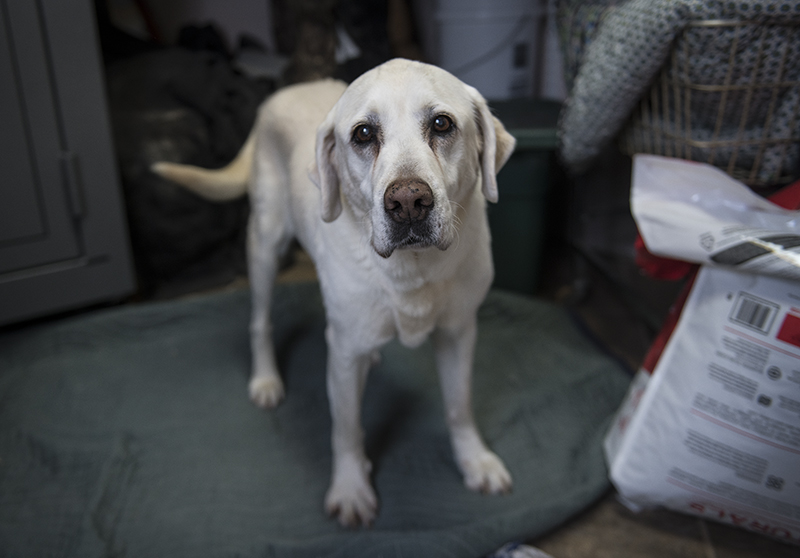 One of the Hall family’s dogs, Cracker, is 14 years old. She had to be taken to a veterinarian after being found because she wasn’t able to move at first after being trapped in a culvert for two days. – Colleen Harrison/Albert Lea Tribune