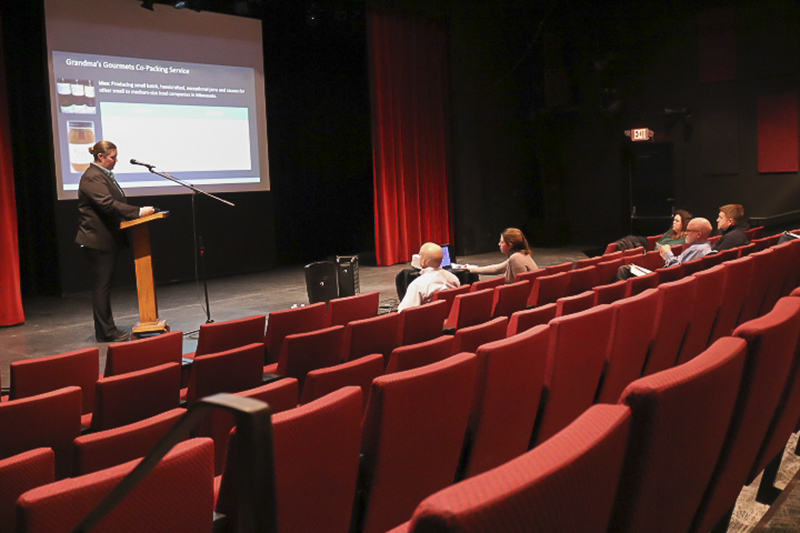 Kim Olson of Grandma's Gourmets presents her business ideas to a judging panel Thursday at Marion Ross Performing Arts Center. She won for the Tiger Cage in the existing business category. - Provided

Two area entrepreneurs are on track to begin a new business venture after winning the Tiger Cage business competition in Albert Lea.

Winning as a new business was Albert Lean Dori Etheridge, who is launching a food truck business called Peppered Cow. Winning as an existing business looking to expand was Kim Olson, who is hoping to grow Grandma’s Gourmets to offer co-packing and private labeling for other similar businesses.

The winners will also receive a package of donated time and in-kind services from Brian Hensley of intellicents, lawyers Matt Benda and Abby Leach, Amber Bergland of Farm Bureau Financial Services and the Albert Lea Tribune.

The goal of the competition was to spur entrepreneurial activity in Albert Lea and Freeborn County.

Noelle Hagen, interim executive director with the Albert Lea Economic Development Agency, which sponsored the event through the Albert Lea Entrepreneur Advancement Program, said 18 different business concepts were initially submitted for the contest in the first phase. Three existing businesses and six new businesses submitted more-detailed business plans in the second phase, and then out of that group, three existing businesses and three new businesses were invited to share their plans Thursday for the judges. 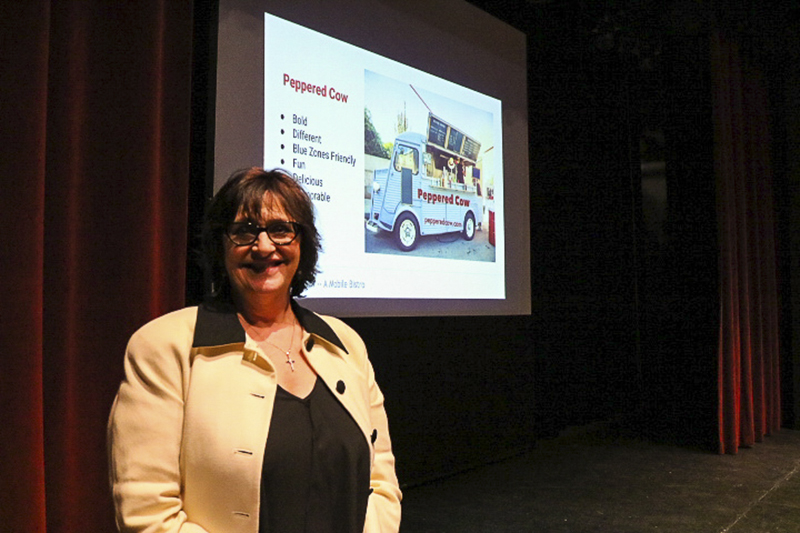 Dori Etheridge won the Tiger Cage in the new business category for her idea for her Peppered Cow food truck. – Provided

“It was a fun experience to see these entrepreneurs get behind their business ideas,” Hagen said.

She said the other new business finalist ideas included a restaurant and a home inspection service, and the other existing businesses were an IT service group and a wellness and massage studio.

She said she is excited to see not only the two winners, but also many of the other participants, who will move forward with their plans.

“I think everything went really well,” Hagen said. “It was our first time doing something like this, so there are additional ideas on how to make it better for the businesses that participate.”

Olson, who works out of the commercial kitchen and warehouse in the business incubator, said she was excited to win the contest in her category.

She plans to use the prize funds for new equipment that will help her become quicker in her work, along with adding some new inventory and people as well. She hopes to have two full-time employees with the potential of growing larger for her project.

Hagen said Etheridge plans to have a food truck built out for her that will have its own generator and won’t need to run off a power source. She hopes to be available for various community events and even host pop-ups throughout the week.

Etheridge said the experience was an incredible one for her.

“I would recommend Tiger Cage to anyone who has ever wanted to start a business,” she said. “It brings you to a place where you have to look at the details of the big picture. Very enriching personally, it brought forth people who really endeavored to help me prepare, mentally, physically and emotionally.”

She thanked her friends, ALEAP, the judges and the steering committee.

“This community we have been blessed with is a treasure,” Etheridge said. “Thank you, Albert Lea, you truly are a great place to live.”

Etheridge said her food will be handcrafted and locally sourced whenever possible. It will include items such as Bahn Mi sandwiches, Philly sandwiches, Cubans, smash-style burgers, hand-cut crispy fries, soups, salads and vegan options.

She hopes to be ready to serve customers in mid-May.