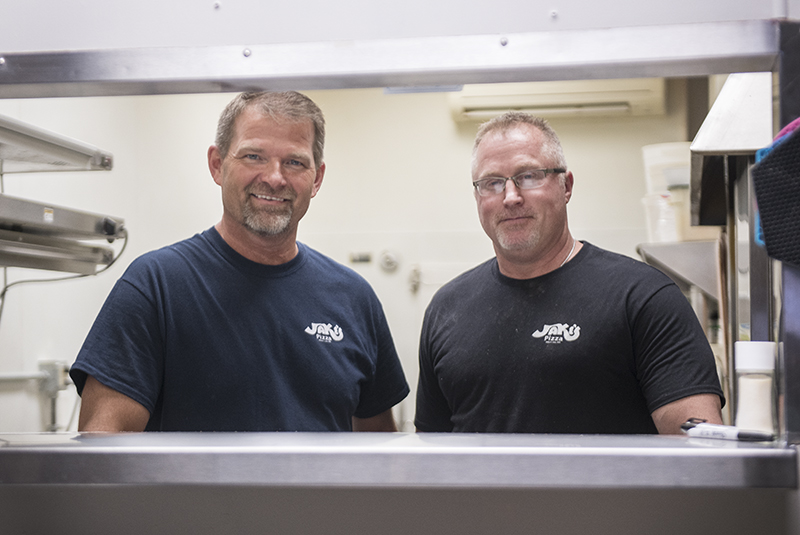 An Albert Lea restaurant sliced up more than pizza for two months and is now a few steps away from a finished interior remodel.

“We’ve been talking about it for awhile,” Jake’s Pizza co-owner Jim Johnson said.

According to fellow owner Bill Anderson, the restrooms were a priority.

“Those had been, those bathrooms were probably, I mean other than just paint, the same as they were when I worked here in high school,” he said.

In addition to a complete bathroom remodel for both single bathrooms in the back of the restaurant, Jake’s Pizza got new stainless steel countertops up front and to the side of the kitchen, both done by Albert Lea Steel.

The restaurant has new paint and new lighting, a change from the maroon-heavy, two-toned walls to a muted gray. Johnson was leery of it to start, but now — especially with the art he knows is coming from Homestead Design — he likes it a lot. 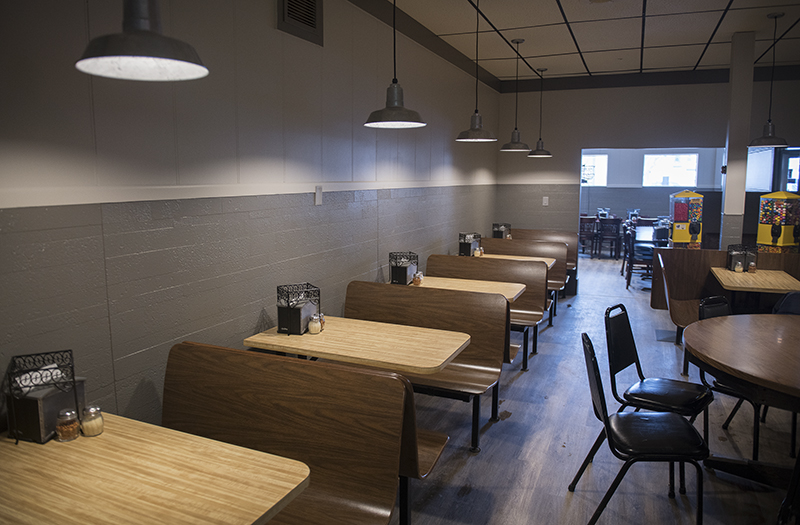 The restaurant has new paint and new lighting, a change from the maroon-heavy, two-toned walls to a muted gray. – Colleen Harrison/Albert Lea Tribune

Jake’s Pizza also raised the floor in the front-most portion of the dining room to match levels with the main dining area. It was a tripping hazard, Anderson said.

It also used to be covered in carpet (and ceramic tile in the bathroom). Now, it’s all a moderately dark wood-like finish.

“We always just try to give our customers a good, clean experience when they come here, and this is going to help us do that,” Anderson said. “That’s what we do it for … for our awesome customers we’ve had forever.”

Customer reactions to the interior work have been positive, though Anderson said some customers were eager to see the atmosphere remain.

Anderson said the contractor worked around the business’s schedule for much of the two-month project, which started the first week of December. There were two days the business sold pizza as pickup or delivery only.

Largely, the project encompassed a lot of what both owners were hoping to work on, though there are still a few items on the to-do list. There is some work to be done in the kitchen area itself, Anderson said, and they’re looking to put in more light above the front countertop, Johnson said. Additionally, the pizza place may get a freezer for half-baked pizzas customers can finish in their own homes, Johnson said.

The pair expects these changes to be made in the next few months. They are considering some exterior storefront work, but that would be part of a longer-term timeline.

But for now, the pair is waiting excitedly for its metal signs — a Jake’s emblem for a front window that shares a wall with dining space and the restaurant’s entrance, a Jake’s logo for each wall in the main dining room and an Est. 1964 sign in another spot. Then, the remodel will feel complete.

“The only thing that hasn’t changed is the pizza,” Anderson joked. 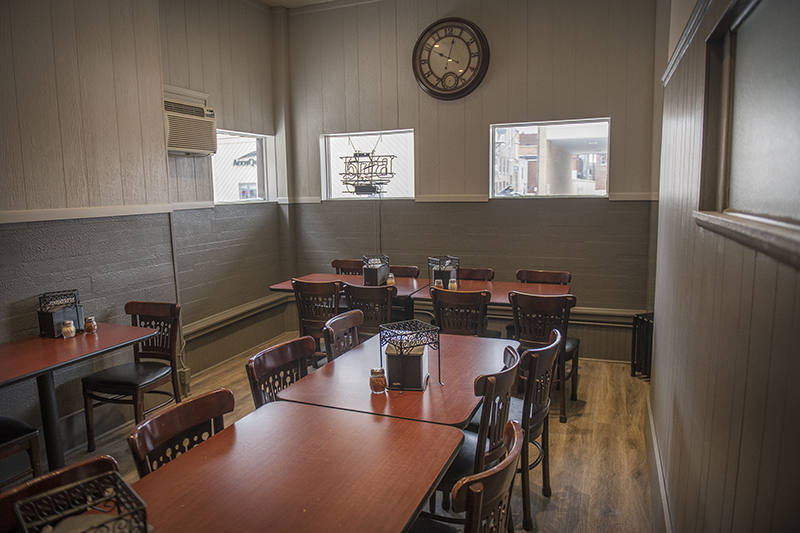 Jake’s Pizza renovations included leveling off a step that went into the front area of the dining room, as well as all new flooring throughout the restaurant. – Colleen Harrison/Albert Lea Tribune