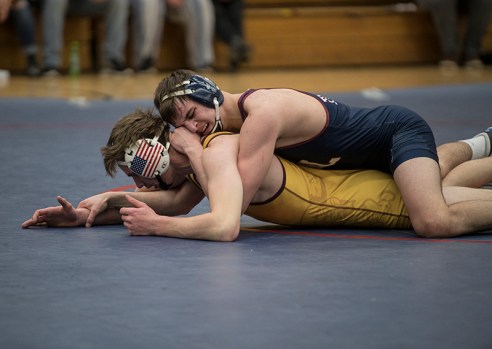 Albert Lea's Josiah Hedensten fought a tough battle in the match of the night, battling back from a deficit to win his match 13-11. - Colleen Harrison/Albert Lea Tribune 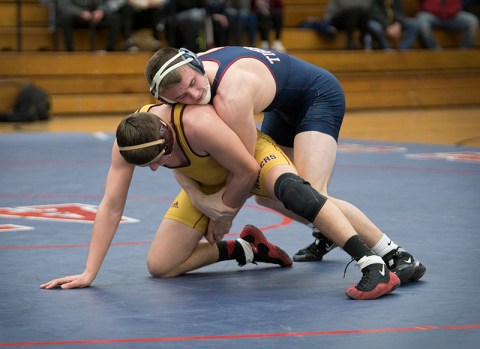 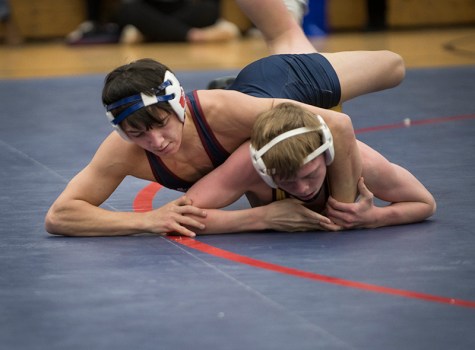 Albert Lea's Nic Cantu, ranked No. 3 at 126 pounds, had a dominant 13-1 major decision win in the Tigers' 42-24 loss to the Raiders Friday at Southwest Middle School. - Colleen Harrison/Albert Lea Tribune 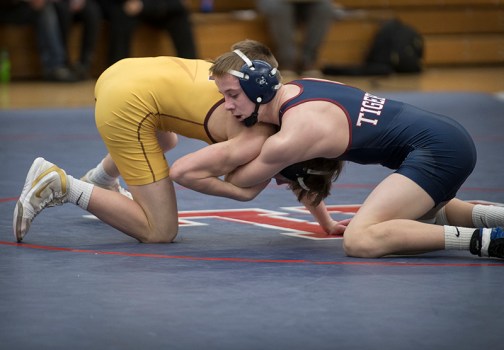 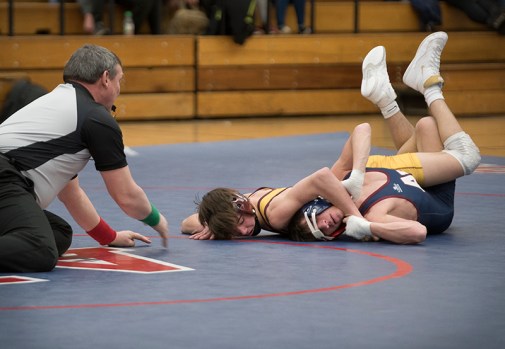 Lack of bonus points hurts Tigers vs. the Raiders

The Albert Lea wrestling team faced the tough task of hosting No. 12 Northfield on Friday night in the final dual of the regular season.

The lack of extra bonus points hurt the Tigers in a big way as they came up short against the Raiders, 42-24.

In the first match of the night, senior Caleb Miller fell to a pinfall in the first period to No. 4-ranked Chase Murphy at 106 pounds. Sophomore Joey Flores was up next at 113 pounds. Flores wrestled a tough match, only trailing 2-0 after the first period. However, No. 5 Jake Messner would be too much to handle in the following periods, losing in a technical fall 17-2.

Senior Nic Cantu, ranked No. 3 at 126 pounds, put the Tigers back on the winning track with a dominant 13-1 major decision win, giving the Tigers their first points of the dual, now trailing 11-4.

Eighth-grader Cole Glazier kept the wins rolling with another major decision at 126 pounds, winning 14-5. Freshman Cam Davis lost in a first period pinfall to the No. 1-ranked Trayton Anderson at 132 pounds, but eighth-grader Derrick McMillian rebounded with a 16-8 major decision win.

Down 17-12 through six matches, sophomore Caleb Talamantes fell in a 11-3 major decision to No. 1 Drew Woodley, followed by fellow sophomore Griffin Studier falling in a close 5-3 decision at 152 pounds.

Sophomore Josiah Hedensten fought a tough battle in the match of the night. Despite trailing 7-0 to start the final period, Hedensten battled back to win the match 13-11 after a late takedown. The win put the Tigers back 24-15 and sent a shockwave of momentum through the team and the crowd.

Up next was senior Connor Barney at 170 pounds. Barney lost in a tough third-period pinfall, putting Albert Lea in a 30-15 deficit with four weight classes remaining.

Senior Zach Glazier came out at 182 pounds and left little doubt as to why he is ranked No. 1 in the state, winning by pinfall in the first period with just over a minute off the clock. Senior Brady Nielsen followed with a win of his own at 195 pounds, coming out on top of a 9-2 decision victory.

The Tigers took a forfeit loss at 220 to set the dual out of reach. Senior Elmer Diaz Noriega finished out the night for the Tigers losing by pinfall late in the second period.

The Tigers finish the regular season with an 18-6 record and will move onto the section tournament starting Thursday, when they will host a team yet to be determined. If the Tigers win, they will advance to the semifinals in Rochester Feb. 16.