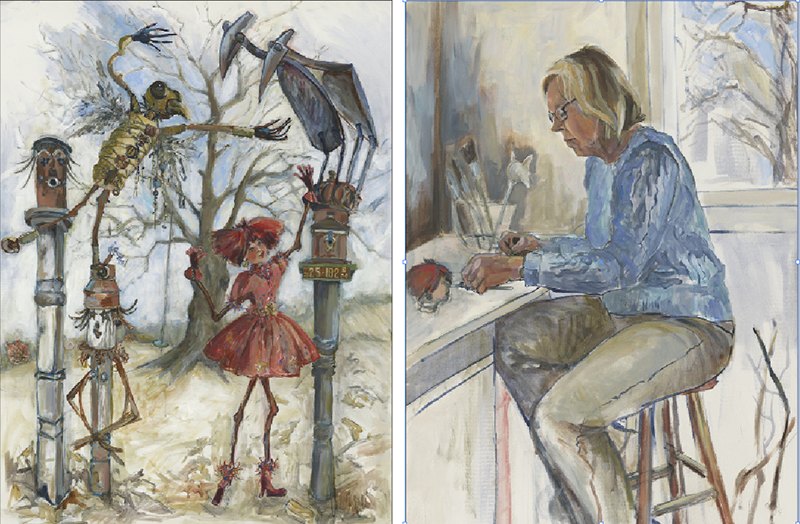 “Bonnie, Dollmaker and Scavenger” includes two companion pieces: a portrait of the Albert Lea subject and an outdoor scene artist Ann Magnusson chose to paint to capture who the subject is. These pieces, as well as four other companion sets, are featured in Magnusson’s show at the Owatonna Arts Center. Provided

An art series begun in the metro area took new life thanks to subjects from Albert Lea and other southern Minnesota communities.

Minneapolis-based artist Ann Magnusson was born and raised in Albert Lea, so when the artist received a Minnesota State Arts Board Artist Initiative grant in 2018 with a proposal to take her series to a new location, southern Minnesota was “a logical place,” she said.

Magnusson said she spent 11 months painting nine subjects: four from Albert Lea, four from Owatonna and one from Mapleton.

The series, “Interior, Portrait & Conversations,” is on display at the Owatonna Arts Center through Feb. 24. It uses at least two companion pieces per subject: a portrait of the subject featured and a look into their private space and their “stuff of life,” as Magnusson says. These are the things people surround themselves with, that make them comfortable and that make them unique from other people.

The pieces vary in size, but are always created with acrylic paint done in multiple layers as Magnusson layers and edits. She moves back and forth between pieces.

“I usually have four or five canvases going at once in my studio,” she said.

She started the series five years ago with friends, families and acquaintances as subjects — just to see if it was viable, Magnusson said.

“I found that there was a great interest in it,” she said. “… It just sort of grew.”

Prior to this series, that was what she focused on: solely interiors.

“I have always loved interiors without people, strangely enough,” she said.

It was the “stuff of life” without the people collecting it. But those viewing her art wanted more.

“People would always say to ‘Please, tell me about the person who lives in that space,’” Magnusson said.

She also had a long-standing love for portraits, but she didn’t want one to cloud the other. She wanted to maintain “the purity of an environment without anything in it,” she said. Hence, two (or more) paintings.

Because the Owatonna Arts Center offered her a place to display, she incorporated the city’s residents into the show. She asked for subject recommendations from the art center director, and those names spurred other names. In Albert Lea, she utilized word of mouth, friends of friends and social media to find her subjects.

“I find people who sound interesting to me,” Magnusson said.

When she goes to someone’s home, she said she lets people direct her to what they want to show her. She looks around and brings her iPad, randomly photographing without fully knowing what she willl paint. Instead, she is looking for what is unique and indicative of who the subject is.

To help herself figure that out, she always conducts a video interview of her portrait subject. The first question is always the same: If Magnusson were to paint you and someone were to stand in front of that painting, what qualities do you hope people would see from that painting?

“I defer to that video again and again to sort of see who I think that person is,” Magnusson said.

She also tries to paint an aspect of the person’s private space that ties into who that person is. Typically, that’s an interior, but in Albert Lea, Magnusson felt one subject’s exterior was more indicative of who the person was.

“That was kind of the exception in Albert Lea,” she said.

Albert Lea entrepreneur Mariah Lynne said she agreed to be a subject, having just finished renovation work on her building on North Broadway.

“I thought it would be an interesting way to capture that,” she said.

She purchased both pieces — the one of her as well as the one of her building’s exterior — and intends to hang them in the building, which is decorated with historical pictures of the location.

“I liked the concept of having a snapshot in time of my life and my building and then adding that to the display in my building,” she said.

Additionally, Lynne said she believed in what Magnusson was trying to accomplish with the series and that the effort was a unique thing to capture that connection between two different subject matters — the person and their space.

“Plus, who doesn’t want to see themselves painted?” she said.

Magnusson said she likes to be more documentarian in her approach to painting interiors and the subjects in them, but she allows herself the liberty to go in different creative directions as the series expands.

“I’m always changing, too,” she said. “I like the idea that I’m changing and I’m growing and I’m expanding how I approach things.”

But it always comes back to the painting’s narrative. There always is one, whether it’s a dollmaker and scavenger or translator and refugee. Magnusson said she wants to move further with the interviews she conducts as the series continues, but for now, excerpts of the conversation are displayed with the painting.

“Each one, through these conversations, every time there’s a sentence or there’s one little thing that just jumps out at me and I know that that’s part of the way I’m going to paint them,” Magnusson said.

The artist said it is important to her to capture diversity in her work. She looks at a subject’s age, gender, occupation — that’s a big one, she said — culture and background. She is looking for what makes people different, but also, what makes them similar.

“I’m looking at how we’re all sort of interconnected,” she said.

When her paintings are hung in galleries, she likes the room a certain way.

And if you’re looking, “the person is probably looking back at you.” She wants those who view her work to see the differences in the interior or exterior, but to also recognize that the person in the painting is just like them.

“That’s really huge for me,” she said.

Her next stop in Minnesota will likely be the Grand Marais and Duluth area, she said. The series is still going strong. Magnusson said she loves it.

“Each person brings something else to the conversation that I find so stimulating,” she said. “It makes me want to paint them. I never get bored because each time, each subject, it’s somebody new … so I don’t get tired of it.”

What: Interior, Portrait and Conversations