An Albert Lea woman who reportedly threatened to kill someone she knew while holding a box cutter blade was charged with a felony Tuesday in Freeborn County District Court. 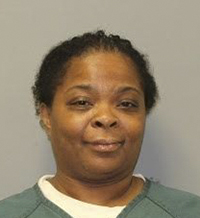 Yolanda Eulia Renett Hulett, 44, is charged with second-degree assault with a dangerous weapon.

Court documents state Hulett was charged after Albert Lea police officers were dispatched Monday to 909 Janson St. after a man said someone he knew slashed the tires of their car and threatened to kill him.

The alleged victim reportedly said they had been in a fight because he was communicating with other women.

Hulett allegedly grabbed a box cutter and cut his clothes. After the alleged victim deflated an air mattress with a fork, Hulett reportedly ran toward the victim with a box cutter blade extended, threatening to kill him.

Hulett allegedly ran after the victim as he ran outside and slashed both front tires of the vehicle until the box cutter broke.

In a statement to an Albert Lea officer, Hulett admitted having a knife, which she threw in the garbage. She also claimed she hit him after he struck her, and she said she cut his tires after he deflated the air mattress.

Hulett also admitted to being under the influence of alcohol.

Assistant Freeborn County Attorney Michelle Johnson requested a $2,500 conditional bond and a domestic abuse no-contact order be issued. She noted the alleged victim is not interested in pressing charges or having the no-contact order issued.

Hulett noted she has not been in trouble with the law since 2003 and has made all of her court appearances.

Judge Steven Schwab released Hulett on her own recognizance, contingent on her engaging in no assaultive behavior, not entering bars or liquor stores, submitting to random testing and following other court requirements.

Schwab did not issue a no-contact order.

Hulett’s next appearance is scheduled for Feb. 21.