Annella Edith Clarke, 88, of Wells died Wednesday, Feb. 6, 2019, at The Shepherd’s Inn in Wells. A Mass of Christian burial will be at 10:30 a.m. Monday at St. Casimir Catholic Church in Wells with Friar Matt Fasnacht officiating. Visitation will be from 2 to 4 p.m. Sunday at Bruss-Heitner Funeral Home in Wells and will continue one hour prior to the service Monday. Interment will be at St. Casimir Catholic Cemetery. Leave online condolences at www.brussheitner.com. Bruss-Heitner Funeral Home in Wells is assisting the family. 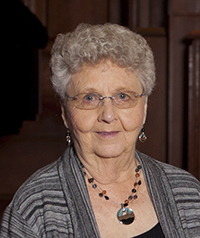 Annella was born April 15, 1930, on the family farm in Easton, the daughter of Leo and Edith (Paul) Braunshausen. She loved growing up on the farm, the outdoors and spending time with her horse, Beauty, and her pony, Lindy. She went to country school and then graduated from Delavan High School, where she was crowned homecoming queen. Annella was united in marriage to Richard Clarke on Sept. 7, 1949, at Our Lady of Mount Carmel Catholic Church in Easton. She was a homemaker and worked part time at Peterson’s Department Store, Del Monte and Hartman TV. Annella was a member of the Wells Legion and Wells Fire Department auxiliaries and St. Agnes Circle of St. Casimir Church. She enjoyed flowers, birds, playing bridge and singing old songs. Annella enjoyed snowmobiling, where she raced and won many trophies. She had a deep Catholic faith and loved being with her family and grandchildren.

She was preceded in death by her parents; husband, Richard Clarke; siblings Charlene (Gene) Borris and Galen (Pat) Braunshausen.