Baker hits the kitchen to help others celebrate holidays, loved ones 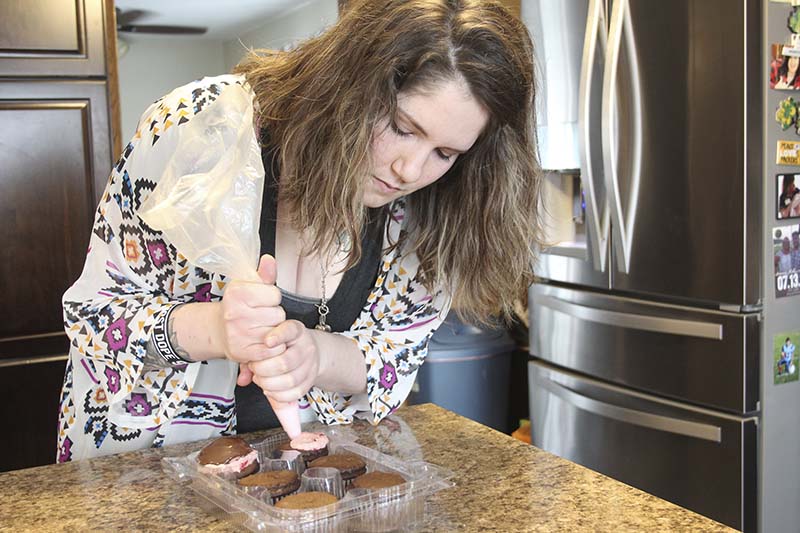 Megan Haukoos decorates a chocolate-covered cherry cupcake for a photo. It is one of approximatley 15 varieties of cupcakes she makes as part of Meggie Sue’s Cupcakes & Co. She has sold cupcakes, cookies and cake pops for five years and fields about two orders a week on average. - Sarah Kocher/Albert Lea Tribune

Baking is for the type A.

At least, that’s what does it for Megan Haukoos, owner of Meggie Sue’s Cupcakes & Co. Cooking has more leeway. Baking is an exact science.

“Every time it is an exact measurement,” Haukoos said. “… I like the preciseness of it.”

She keeps her life outside baking organized, too. She’s a list person.

“Everything has to be the exact way I like it,” she said.

Haukoos, now 24, grew up watching her grandmother bake in the kitchen. She started baking with a vengeance at 14, and selling what she made about five years ago, after cranking out a trifecta of gourmet candy-themed creations for her own high school graduation party. 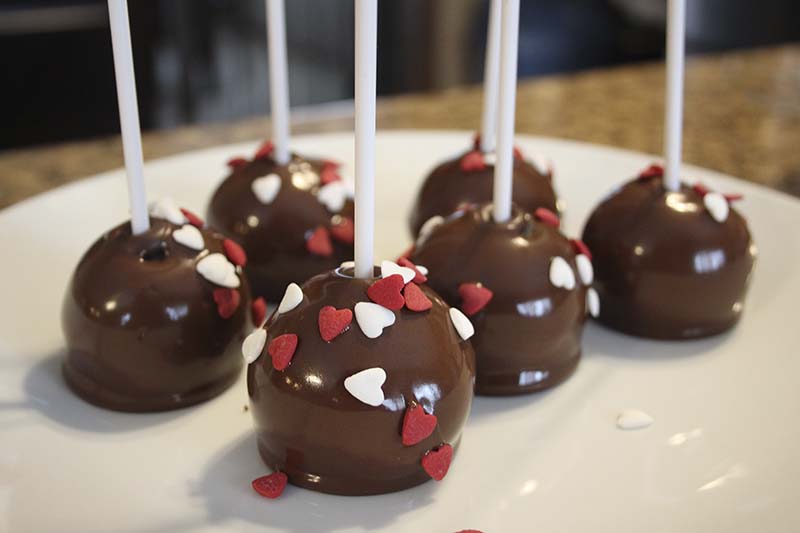 Megan Haukoos made Valentine-themed chocolate cake pops as an example of her holiday-themed offerings, which she will begin baking a few days ahead of the holiday. – Sarah Kocher/Albert Lea Tribune

“Everybody loved them,” she said of her Snickers, Reese’s and Twinkies cupcakes. People said to her, “You need to start selling these.”

Graduation is still her busiest time of year, when families order cupcakes and cookies. Last year, Haukoos said she made 200 cake pops for one party.

Now, she’s gearing up for Valentine’s Day orders. She tries to focus her efforts around holidays and events.

Haukoos said she typically fields two orders a week, though that number — and order size — increases during graduation time. She also works full-time at Qdoba.

Though she offers cookies and cake pops as well, her most popular offering is her cupcakes, she said.

“That seems to be my niche in the culinary world,” she said.

She does experiment with recipes, many of which she finds on Pinterest and said she adds her own tweaks to. Her chocolate-covered cherry cupcakes are a recent addition. Popular staples include her loaded Reese’s cupcake, loaded Oreo and her monster cookie cupcake: a glob of monster cookie dough frosting nestled on a yellow cake base. The last time she listed all her flavors out, she offered 15 varieties of cupcakes, Haukoos said.

She started with orders from her mother’s coworkers, but now, she more frequently has requests from people she doesn’t know.

One of her initial customers is also responsible for the company’s name. Jerry Collins’ late wife, Becky Collins, used to order cupcakes from Haukoos. Jerry Collins gave her the nickname. There’s no particular reason. All the “rugrats” got one, he said, including Haukoos’ siblings.

Haukoos hopes to have her own space to cook and consult outside of the home, but money is the biggest challenge of the new business. Still, she hopes to have that space within one or two years.

“This is my passion, and I really enjoy hearing people’s feedback,” she said.

She documents her creations through photos posted on Facebook. It’s been a chance to see how far she’s come.

“This is really the only thing I’ve ever been interested in is baking,” Haukoos said.