Memorial services for Betty Marie (Kropf) Johannsen of Albert Lea will be at 2 p.m. April 13 at Bonnerup Funeral Service in Albert Lea. Visitation will be one hour prior to the service. Interment will be in Freeborn Cemetery at a later date. 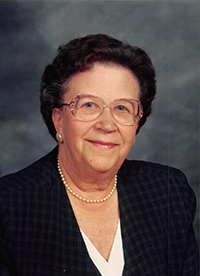 Betty was born to Marvel and Hilda (Schoeberlein) Kropf on Dec. 1, 1922, at the home of her fraternal grandparents in Rockwell City, Iowa.

She was baptized in the Methodist church in Farnhamville, Iowa. She attended Sunday school and public school in Farnhamville. Her sophomore year was in Rinard, Iowa, and Rockwell City. In 1938 the family moved to Minnesota. She graduated in 1940 in Freeborn.

She married Henry N. Johannsen on June 22, 1941, at the Methodist church in Janesville. They had two daughters, Nancy and Susan.

Betty and Hank were active in the church and school. Betty was a member of Freeborn Congregational United Church of Christ. She was active in the women’s fellowship, where she was co-chairwoman of the caring and sharing committee for 25 years, moderator for two years, deaconess, superintendent for Sunday school and a Bible school teacher. She served with Hank as pilgrim fellowship sponsors and religious education committee members. She represented her church many times at state conferences.

She also belonged to extension club, Royal Neighbors and American Legion Auxiliary. She was a blood donor and loved her family.

Betty worked at Gilmore’s Store in Freeborn for five years and E.F. Johnson Co. in Waseca over 23 years, retiring in 1985.

She liked to cook and entertain. She was “Grandma Betty” to many.