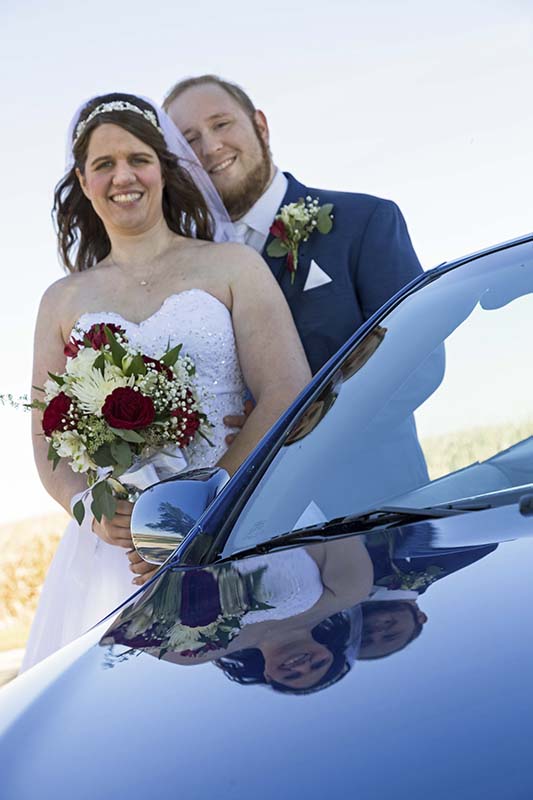 Parents of the couple are Loren and Joan Bidne of Kiester and Thomas and Joan Van Sloun of Coon Rapids.

The Rev. Katie Pals performed the double ring ceremony with the Rev. Michael Van Sloun, uncle of the groom, reading the scriptures and giving the marriage blessing.

Kathy Van Hove of Thompson, Iowa, was the organist. The Rev. Josh Enderson of Albert Lea, a pianist and soloist, sang “Precious Love.” The lyrics and music of the song were written by the bride’s grandfather, Armond W. Braun. Her grandfather wrote this song for his sweetheart, Marcella, the bride’s grandmother, before they married in 1940.

After the service, wedding guests joined the bride and groom for dinner and dancing at the reception held at The Branding Iron in Thompson, Iowa.  Tyler Sampson, friend of the groom, was the reception host.  Alissa Pier, Ty Luepke and Valeri Luepke, cousins of the bride, cut and served the wedding cake.

The bride is a graduate of United South Central High School in Wells, and earned her bachelor’s degrees at University Dubuque in Dubuque, Iowa, as well as a diploma from Vancouver Film School in Vancouver, British Columbia. She is a 3D designer at Landscape Structures Inc. in Delano.

The groom is a graduate of Totino-Grace High School in Fridley and Brown College in Mendota Heights. He is a 3D print technician at Fantasy Flight Games in Roseville.

After a honeymoon in Hawaii, the newlyweds are establishing a home in Andover.