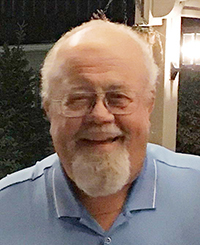 Born Jan. 8, 1940, in Green Bay, Wisconsin, he was the son of the late Edgar Merrill Gulbrandson and the late Ann Jeanette Holmquest Gulbrandson.

Chuck proudly served his country in the United States Navy, earning the rank of lieutenant junior grade while serving in Vietnam. He also served in Iran and was a consultant to the Shah. He earned a Bronze Star for heroism while serving in the military.

He is a recipient of a Master of Business Administration degree from the State University of New York. Chuck was an avid golfer, loved the Clemson Tigers, reading and working puzzles. He is described by those who love him as a sharp-minded old fart.

In addition to his parents, he was preceded in death by his wife of 47 years, Frances Elizabeth Terrell Gulbrandson; and two sons, Michael Eric Gulbrandson and Charles Richard Gulbrandson Jr.

A celebration of life service will be from 2 to 5 p.m. Sunday at Cobbs Glen Clubhouse, 2201 Cobbs Way in Anderson, South Carolina. This is a casual affair; no ties. A memorial service will take place at a later date at Arlington National Cemetery.