Close — but not quite 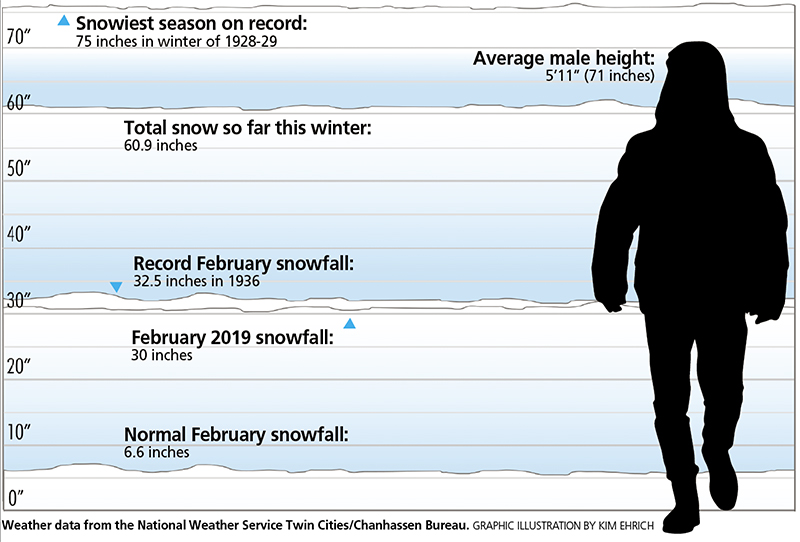 Albert Lea came close but did not break the record for total snowfall in February, according to data from the National Weather Service.

The weather agency has kept data dating back to 1893 for the city, with the exception of a few small gaps, said Michelle Margraf, meteorologist and observing program leader with the Twin Cities/Chanhassen Bureau of the National Weather Service.

According to records, the most snow to ever fall in the month of February in Albert Lea was 32.5 inches in 1936, compared to the 30 new inches of snow received this month, as of the end of the day Tuesday.

The normal amount of snow for Albert Lea in February is 6.6 inches, she said.

The snow has seemed especially harsh this year because winter started off slow and with warmer weather.

She said “the switch flipped” in January when there were record cold temperatures and the snowstorms began.

“It’s almost like two separate winters we’ve had — a lot more mild and calm winter to start, and then after mid-January it switched to a cold and snowy winter,” she said.

Albert Lea has also been impacted by high winds and blizzard conditions that have led to numerous crashes, school closings and the closure of multiple roadways, including interstates 35 and 90.

Margraf said this winter is presently the 11th snowiest season on record for Albert Lea, with 60.9 inches of snow received so far.

The snowiest season was from the winter in 1928-29, when the city received 75 inches.

Albert Lea could easily move up in the record books, as only 5 more inches of snow separate this winter from the fifth-snowiest winter on record in 1978-79 with 65.2 inches of snow.

Dale Liska of Clarks Grove brought some humor to the recent snowstorm when he took this photo. – Provided

Looking ahead, Margraf said the next two weeks look cooler than normal but with no new snowstorms on the horizon after the one forecasted for Friday. The Weather Service is estimating 1 to 3 inches of snow possible in that storm.

Cold air moves in Saturday night when a low of 10 degrees below zero is forecasted. She said the cold air will inhibit storms next week.

Further into March comes the possibility of flood risks because of the amount of snow on the ground, the frost depths and the below normal temperatures.

Margraf said the National Weather Service released its first spring hydrologic outlook last week that provides flood potential information for the coming spring, which states there is an elevated risk for flooding this spring.

She said the ideal situation would be for a slow warmup, where the snow gradually melts with highs above freezing during the day and below freezing at night.

If there is a quick warmup and the snow melts all at once, that’s when there will be concerns for flooding.

— Data from the National Weather Service