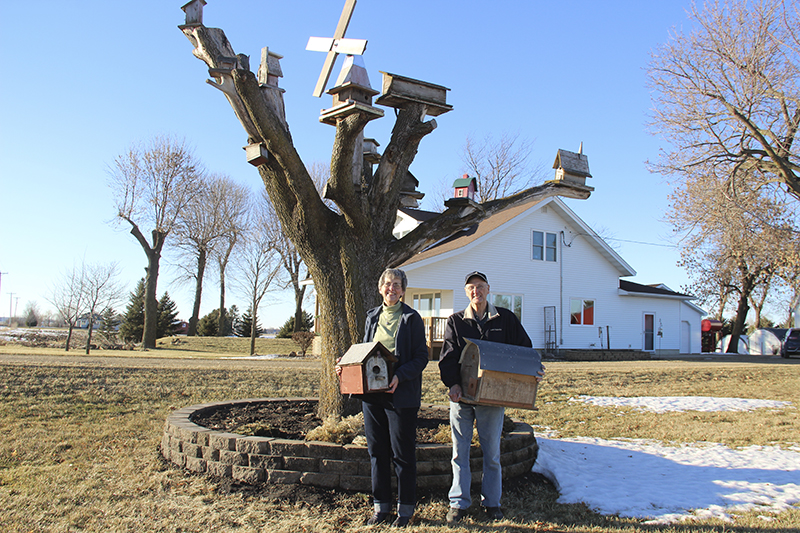 Larry and Sylvia Zevenbergen stand with two birdhouses — one a post office, the other modeled after their barn — to be added to the tree in warmer weather. Larry Zevenbergen has added houses to the tree after it was damaged in the 2010 tornado headed through Hollandale. - Kelly Wassenberg/Albert Lea Tribune 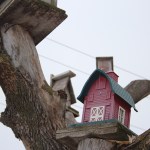 The plastic red barn feeder was a gift from the Zevenbergens’ daughter, a stark color contrast with the unfinished wood structures constructed out of scrap lumber and sprinkled around the remainder of the tree limbs. Sarah Kocher/Albert Lea Tribune 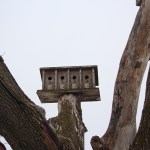 Larry Zevenbergen has a story for each of his birdhouses, which together represent a small town for birds. Sarah Kocher/Albert Lea Tribune 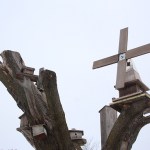 The windmill was constructed as a nod to Hollandale’s Dutch heritage and, in a strong south wind, the blades will turn. Sarah Kocher/Albert Lea Tribune 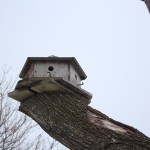 The Pentagon is a recent addition to add law and order to the bird community, Larry Zevenbergen said. Sarah Kocher/Albert Lea Tribune 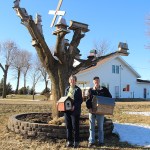 The first house Larry Zevenbergen built was actually a reconstruction of the one already standing on the property when he and his wife, Sylvia, moved there 44 years ago. The new one is a multi-story unfinished wood structure with doorless circular entries.

It’s also over 15 feet up in the air, mounted on top of a thin but sturdy wood pole.

This birdhouse is further in on a property where the main attraction visible from the road is a town of miniature homes, almost exclusively constructed by Larry Zevenbergen, all nestled into dark, smooth, bulky tree branches reminiscent of the flexed arm of a body builder.

Though both Larry and Sylvia Zevenbergen said others had it worse, the tornado moved between their property and the property to their west.

“I thought it sounded like a tractor of a semi (groaning) up a hill,” Sylvia Zevenbergen said.

They were located near the tornado’s start, about a half-mile in, Larry Zevenbergen said. They watched the tornado that would eventually hit near Clarks Grove pass by through the window.

“He said, ‘I think we made it through the worst because we should be done now,’” Sylvia Zevenbergen said. “So I went back to the sink and started washing dishes. And he said, ‘Oh, there’s a tornado.’ I said, ‘You’ve got to be kidding.’ So I walked in, and it was like a pencil — it just bobbed up and down. I said, ‘That’s it. I’m going to the basement.”

“We had a lot of tree damage,” Sylvia Zevenbergen said.

Over the course of a year or two, Larry Zevenbergen said he cut down 10 trees. Eight of these stood in a row in the northwest portion of their backyard, leaving a gap-toothed grin behind.

Their barn, which stands behind the house, had moved 4 inches, Sylvia Zevenbergen said. They used three machines — one Caterpillar holding and two backhoes pushing and pulling — to straighten it back out again, and the barn was resheeted and resided.

People came over to help them wash windows and clean up — lots of people, Sylvia Zevenbergen said. They noticed spots on the glass.

“It was pitted — it was damage in the glass itself from the nails and sticks and stones,” she said.

The couple put new windows on their home, some due to the tornado but some of their own volition.

“It took us a year just to get everything back to normal,” Larry Zevenbergen said.

But when he looks at a northeasterly slant through the gap between the barn and the chicken house, he can see one of the properties in the distance that got hit harder.

“So, we actually had it pretty good,” he said.

The tree to the east of their driveway, now adorned with birdhouses, was spared from removal afterward because it still had branches on it, Larry Zevenbergen said. Eventually, it would have gone too, but Sylvia Zevenbergen read “Birds & Blooms,” and she had a different idea, she said.

She saw a feature on a man in Wisconsin who did the same thing with a dead apple tree.

“That’s something we can do,” she said, applying air quotes to the ‘we’ that, in practice, meant Larry Zevenbergen. “We” meant “he.”

Larry Zevenbergen makes the birdhouses out of scrap lumber.

“It’s not much fun just buying birdhouses,” he said.

Since he started with four or five birdhouses right away, the tree has turned into its own town of 15 to 16 buildings for birds. There’s a church — “I was waiting for the cardinal to take residence” — and a fourplex that acts as the high-rent district, as well as residential housing Larry Zevenbergen considers the affordable housing area. Their daughter, Carla, gave him a red plastic barn feeder he calls his cafe, and last year, he added the Pentagon — for law and order, he said. There’s a house out on a limb for the cliff-dwellers. After someone pointed out Hollandale’s Dutch influence, he built the birds a windmill. Although it takes a good 20 to 25 mph south wind, Larry Zevenbergen said, it does turn.

Though he said the tree is close to its limit of birdhouses, he has plans for three more: a post office made out of a mailbox and modeled after one his brother had, a replica of the barn that moved 4 inches and then moved back, and a replica of the Zevenbergens’ chicken house. Two of the three are made, waiting for warmer weather for installation. When he puts up a new birdhouse, it’s done with a combination of ladder use and good old-fashioned tree climbing, Larry Zevenbergen said.

However, it’s a bit light on residents. The homes are occupied by sparrows, but not many, Larry Zevenbergen said. Both are bird-watchers, keeping an eye on the visitors who make the trip to the birdfeeders stationed outside the east-facing dining room window in the human-sized house.

“That we did notice after the tornado — the birds that we had did not come back right away,” Sylvia Zevenbergen said.

But nine years later, they watch the chickadees, nuthatches, goldfinches and woodpeckers who come to visit, and Larry Zevenbergen designs them homes in his mind.