Donald Edwin Jensen, 79, of Albert Lea, formerly of Kiester, passed away Sunday, Feb. 24, 2019, at Woodlands at St. John’s Lutheran Community on Fountain Lake in Albert Lea. A memorial service will be at 11 a.m. Monday at Bruss-Heitner Funeral Home in Wells. Visitation will be one hour prior to the service at the funeral home. To leave online condolence, visit brussheitner.com. Memorials are preferred to Farming of Yesteryear. 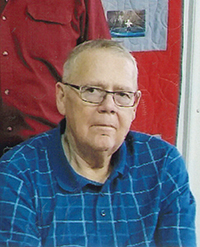 Don was born and baptized at home Oct. 11, 1939, in Freeborn County to Edwin and Ruby (Thisius) Jensen. He graduated from Kiester High School in 1958.

Don and Karen Janzig were married Aug. 27, 1958, and they made Kiester their home for 59 years. Don was an over-the-road truck driver for various companies and retired in 2004. He and Karen enjoyed camping; wintering in Sierra, Arizona; and trips and cruises to Alaska, Panama Canal, Caribbean, Hawaii, many places in the United States and the last few years in Bayport, Alabama.

Don was active in city council and enjoyed being active with Farming of Yesteryear. He was a member of Our Saviors Lutheran Church in Kiester. He and Karen moved into Albert Lea in 2017 and enjoyed meeting new friends and taking many road trips. He loved spending time with his children and grandchildren.