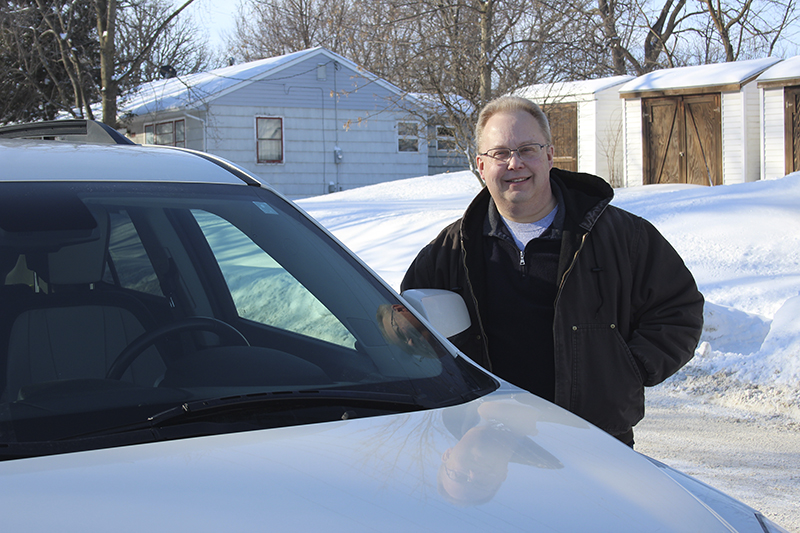 Don Hauge, former EMT and paramedic, said the toughest part following his July heart attack was the emotional recovery. Between two procedures, he had five stents placed. He had his heart attack while driving to Hollandale. - Sarah Kocher/Albert Lea Tribune

He was blowing snow after one of last year’s large April storms when he noticed that feeling, paired with shortness of breath.

“It was enough to make me say, ‘I gotta quit and I gotta go in the house,’” Hauge said.

After he sat down, it went away pretty quickly, he said. But Hauge, now the executive director of Southeastern Minnesota Emergency Medical Services, had been an EMT or paramedic for 38 years. So he told his wife he needed to go to the emergency room and get it checked out.

The ER thought as he did, Hauge said: that it sounded suspicious. He was in the hospital for two days in Albert Lea, then in Rochester for two days. His cardiologist, Dr. Darrell Newman with Mayo Clinic Health System in Albert Lea and Austin, said the stress test Hauge took during this time was helpful in determining it was safe for him to exercise in cardiac rehab.

So Hauge did. For 36 sessions, three days a week, he did nurse-monitored exercise. During that time, he was also educated on good eating habits, blood pressure and medication.

“They did some really good things as far as that goes,” Hauge said.

Still, he was having pain in his chest that would at times travel into his arm or his back, Hauge said. He put it low on the pain scale, and when he finished exercising, it went away pretty quickly. But on his second-to-last session, his heart rhythm wasn’t what it normally was and he couldn’t finish the whole session, Hauge said.

The next day, July 31, he said he felt OK. He drank a pop, and he picked up a friend for a dinner excursion to Hollandale. They took Interstate 35 North.

Hauge couldn’t concentrate on what his friend was saying, he said. He kept feeling the uncomfortable sensation of indigestion that made its home in under his left pectoral.

“The pain just kept getting worse and worse,” Hauge said.

He pulled over. It was not indigestion.

“‘You’re gonna have to drive,’” he told his friend. “Something’s wrong.”

His friend drove him to the hospital in Albert Lea. During that 10 minutes, the pain intensified until Hauge said it broke the roof off the 10-point pain scale. He felt sick. He was short of breath.

He was having a heart attack.

“I just didn’t think that would happen to me,” Hauge said.

“I was concerned that I could die right there,” he said.

Thanks to his previous work as a paramedic, Hauge knew one of the flight nurses working the helicopter that flew him to Rochester.

“I’m coming to get you, buddy,” Hauge said the flight nurse texted him.

In Rochester, they put a stent into one artery, Hauge said.

Eventually, he would have four more put in, as several of his vessels were close to blocked by plaque. One of those in the second batch went into an artery Hauge said they call the “widowmaker” — the left anterior descending artery, which supplies a large amount of blood to the heart.

“What we thought was mild disease turned out to be kind of significant disease in my heart,” he said.

Newman said Hauge was at a high index of suspicion for coronary artery disease because of other health factors: hypertension, diabetes and elevated cholesterol levels. But his symptoms were vague, and his initial pain rankings were low.

“I think in a lot of ways he would try to rationalize his discomfort,” Newman said. “… Don does what most of us do. You take a symptom and then you try … we all try, to a certain extent, to self-diagnose. If you have a headache, you go to the pharmacy and you give yourself Ibuprofen.”

He used Hauge’s case in a cardiology grand rounds conference for ongoing education because he said it was a representative case of ischemic heart disease.

Hauge pulled the snowblower back out — but it made him nervous.

“The emotional part for me was difficult,” he said.

He had seen bad things happen to people who had heart attacks.

“I saw a lot of people die,” Hauge said.

That was the toughest part of his experience: that he knew what could happen.

But for Hauge, it did not. He did not pass out on the road, and his friend was able to drive him to the hospital. He said he is grateful for both of those things.

He bowls twice a week.

“I might have been afraid to do that had I not gone through cardiac rehab,” Hauge said.

He credits his nurses, doctors, helicopter staff and ER staff for a job well done in his care. Now, he is trying to do his part: walk more, watch what he eats and manage his diabetes better.

“I can’t say I’m a model patient, but I’m trying to make some improvements — not be as sedentary as I once was,” he said.

And he encourages other people to keep an eye on their own symptoms, go to a doctor, call 911 and take an ambulance.

“I didn’t do all the right things,” Hauge said. “… Maybe I, too, had that denial (that) is very common in cardiac-type events.”

Newman said a heart attack can be related or unrelated to strenuous activity. He encouraged people to maintain a healthy body weight, avoid smoking, keep high blood pressure in check and trust your gut. 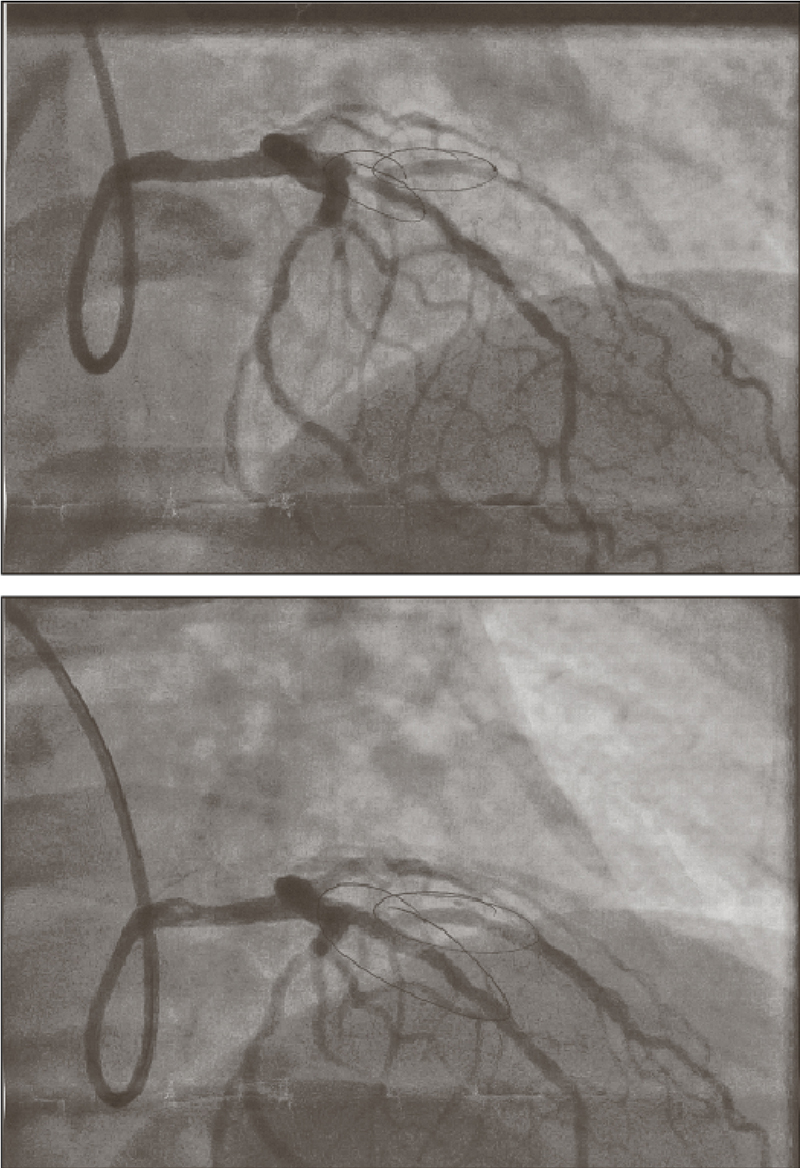 The dark color notes blood flow, Hauge said. The scan of this artery — the one singled out by the left-most circle — shows the change in flow from before, above, and after, below, a stent was inserted. – Provided