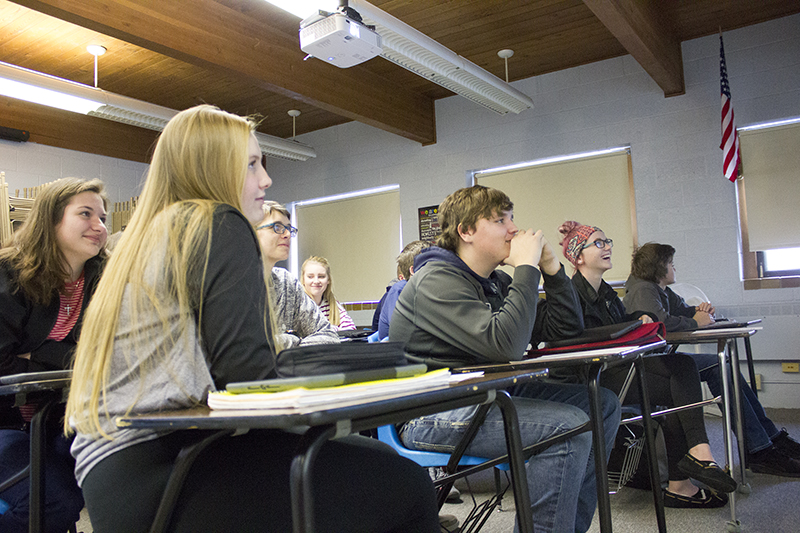 Glenville-Emmons students take part in a Spanish lesson. They are able to take elective courses that otherwise might not be available, because of the district's participation in the consortium. — Sam Wilmes/Albert Lea Tribune

GLENVILLE — It is a December Friday afternoon at Glenville-Emmons High School.

Approximately 15 students are receiving a Spanish lesson from a Grand Meadow teacher via interactive television.

The classes are part of a learning consortium the district takes part in that allows students to take classes that otherwise might not be available.

Glenville-Emmons joined one year later, and Alden-Conger and Kingsland districts have since been added for special education courses. 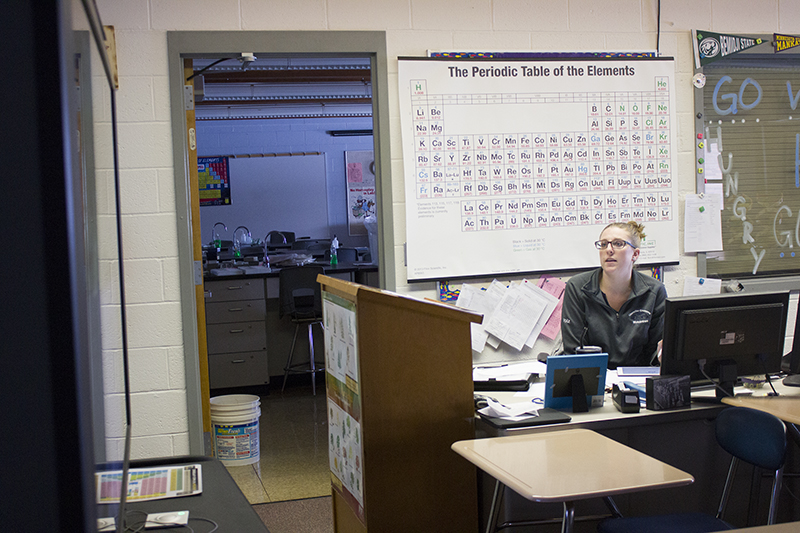 Some classes change from year to year. Next year, Glenville-Emmons plans to offer advanced biology to the consortium.

Tietje said the consortium was founded “just out of that need of being able to provide the services to the students and providing qualified teachers.”

He said the consortium allows Glenville-Emmons to keep teachers the district might not be able to otherwise because of a lack of students.

School districts in the consortium do not charge each other for teacher services.

“Our theory is that if everybody has a couple of classes they’re offering, and we don’t charge each other, then it’s going to make a better education for all of our students,” Tietje said. “Now instead of having only two or three choices, they’ll have four or five choices per class period for elective classes.”

Tietje noted three to four years ago, Glenville-Emmons was having trouble finding an English teacher. After finding a potential instructor who was not yet licensed in Minnesota, a different school in the consortium allowed them to temporarily use its teacher.

To Tietje, the consortium allows students to gain a better idea of their career preferences.

As principal, he oversees the program at Glenville-Emmons.

“It does make scheduling easier when you have more choices,” he said. “It makes the students enjoy their education experience more as well when they have things that they can take that they are interested in.”

He said having the available classes makes Glenville-Emmons more attractive.

“If you are in a school where you are stuck, very limited on your class choices, and its maybe classes you necessarily aren’t interested in, that student’s going to have a little more of a negative feel, a negative approach toward school,” he said.

Tietje said because of their involvement in the consortium, the districts compare favorably to similarly sized schools.

“When we can sit back and look at this list of classes, that you go around other schools our size, and you look at their list of electives, our list covers a much wider area, much more opportunities,” he said.

Tietje said the district is working to increase its options for students.

“In fact, that’s our next goal, is to create some concurrent enrollment classes,” he said. “So get classes through Riverland that we can offer for some college credit.”

Volz said the consortium allows students to engage in long-distance learning, preparing them for some college courses.

Glenville-Emmons freshman Emma Lorenzen and fellow high school student Sam Chapek noted the importance of taking Spanish to get into a four-year college.

“It makes me feel good that I know I have a chance to take a foreign language here in such a small school,” Lorenzen said.

45-50 Glenville-Emmons students who take classes in the consortium

7 School districts participating in the consortium