Funeral services for George F. Feuerhelm will be at 10 a.m. Friday at First Lutheran Church in Albert Lea. The Rev. John Holt will officiate. Burial will take place in Graceland Cemetery following the service. Visitation will be from 5 to 7 p.m. Thursday at Bonnerup Funeral Service in Albert Lea and will continue one hour prior to the service at the church. 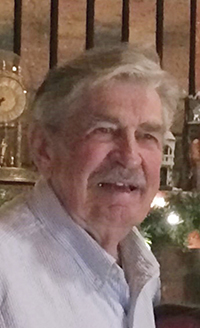 George Frederick Feuerhelm was born July 16, 1932, in Lansing, Iowa, to Clarence and H. Agnes (Pease) Feuerhelm. He graduated from Lansing High School in 1950. George attended Luther College, where he obtained his bachelor’s degree in music. He played trombone all four years in concert band and served as the Band and Music Association president. He later obtained his master’s degree in music theory from the University of Northern Colorado.

George served his country honorably in the United States Army from 1954 to 1956. Most of his time was spent stationed in Okinawa, Japan, where he taught a music appreciation class and enjoyed playing on the baseball team. On Aug. 4, 1956, George was united in marriage to Donnabelle “Donn” (Olson) in Rake, Iowa. To this union, the couple was blessed with three children: Scott, Stacey and Nathan. George and Donn spent 62 wonderful years together.

George was a very accomplished musician and shared his love of music with many people. He spent 39 years teaching band and orchestra in Iowa and Minnesota with the last 19 years in Albert Lea. George was also involved in theater, having played the lead role in several ACT musicals. He was a solo and ensemble contest judge for many years and was grand marshal of the Festival of Bands in Albert Lea in 2003. George enjoyed playing in both Albert Lea Community Band and Austin Symphony Orchestra. After retiring from teaching in 1994, he composed and published several vocal compositions.  When George wasn’t teaching or playing music, he was very involved in his children and grandchildren’s lives, to whom he showed unconditional love and support.

According to his wife, each time George met a previous student, although he may not remember their name, he could always recall what instrument they played! His wife, Donn, will remember him as being the most kind and gentle man she has ever met.