Hartland U: ‘It’s a meeting spot for the town’ 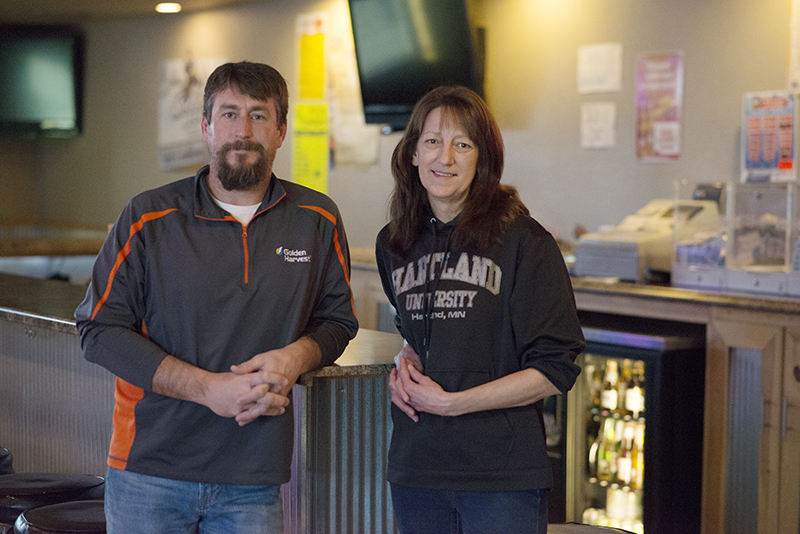 Hartland University owner, Dan Harguth, left and manager, Trisha Lestrud have each been at the bar since since the late 90s. Harguth bought the bar in December of 1997 and Lestrud started in 1998. Tyler Julson/Albert Lea Tribune

HARTLAND — For over 20 years, Dan and Tara Harguth have owned Hartland University, the lone bar in Hartland. Since buying the bar in December 1997, many things have changed; however, Harguth’s passion for running the bar remains the same.

Dan Harguth part-owned a supper club in Otisco for just over a year after graduating high school. Ultimately, he decided the restaurant wasn’t for him and moved to Hartland to buy the bar.

Like many bars, Hartland University hosts pool and dart leagues throughout the year, but what sets them apart from many other bars in the area is the sand volleyball and bean bag leagues they host during the summer. Both nights normally draw in a large crowd, keeping the bar busy.

Trisha Lestrud, Hartland University’s manager, has been employed at the bar since 1998. She said the customers and the town are the best part of the job.

“It’s a meeting spot for the town, really,” Lestrud said. “If somebody needs something or wants to see someone, this is the place they come.”

After owning the bar for just over 21 years, Dan Harguth said there aren’t many things he finds difficult anymore. He credits the work of Lestrud and the rest of the employees for making running the bar a relatively easy job. The one thing he finds a little difficult is putting together and scheduling big events.

“We’re not like some of the other area towns bars — we don’t have a lot of big events,” Dan Harguth said. “There’s only so many weekends in the year, so it’s hard to plan a lot of big events. We don’t want to take away from annual events that are already going on, so it can be tough.”

With no other stores or restaurants in town, Hartland University is the only establishment where people come to meet in Hartland. Harguth talked about why it’s important the bar remains in the community.