‘It was a loss that touched the entire community’ 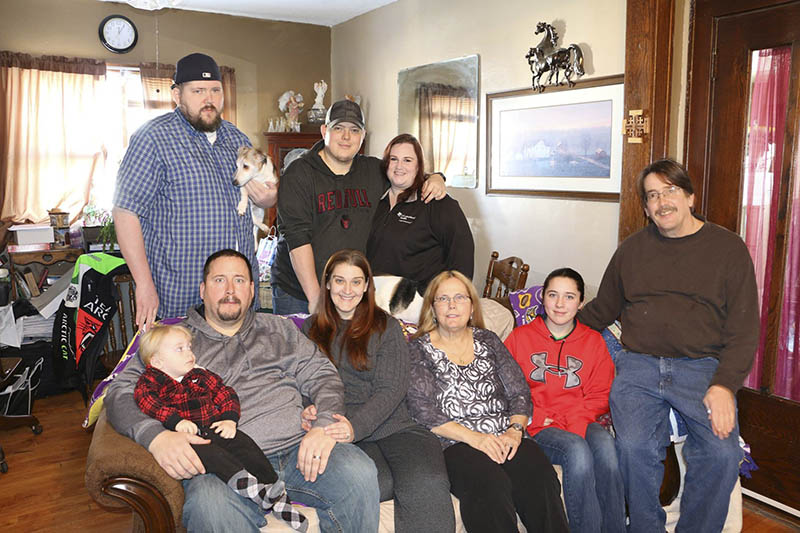 Dan Borland, far right in front, is pictured with his family in a photo shared on Facebook on Dec. 25, 2017. - Provided

Longtime Albert Lea advocate and volunteer Dan Borland, who died of an apparent heart attack Sunday, is being recognized by friends and family as a kind and generous person, selfless with his time, camera and video work, and willing to put his health after serving others.

Borland and his wife, Linda Borland, had been married for nearly 43 years when he died Sunday at Mayo Clinic Health System in Albert Lea after suffering a medical incident in blizzard conditions in the nearby First Lutheran Church parking lot.

Quincy Borland, the couple’s son, said his father’s car became stuck while leaving the church after livestreaming the service. He said he has been told his father had shoveled snow and entered the vehicle, possibly to escape the cold or because he was tired. He noted an EMT found his father unresponsive, alerted 911 and started CPR. Mayo Clinic Health System in Albert Lea staff reportedly unsuccessfully tried to revive him.

“It’s terrible,” Linda Borland said. “It is unbelievable. He was a big part of my life.”

Dan and Linda Borland, who married in 1976, met the year prior and spent two years in Leland, Iowa, before returning to Albert Lea in 1980, where they have lived ever since.

They have two other sons, Dana and Samuel.

Dan Borland, a 1974 Albert Lea High School graduate, attended Austin Vocational Technical School, graduating in 1980. Following graduation, he was hired by KAAL-TV and, after a five- to six-month stint in production, served as a newsroom photographer until 2007.

Following his TV work, Borland started his own business, Dan Borland Videography, in 2009. He videotaped services at First Lutheran Church three Sundays a month while being a member of St. Theodore Catholic Church. He is remembered for shooting weddings, sometimes for free.

“Dan’s community was very important to him,” Linda Borland said. She noted he was concerned about the state of local lakes and always volunteered at lake cleanups.

She remembers her husband as a “very caring person.”

“He could talk to a stranger, and by the time he was done talking to them, they were friends,” Linda Borland said. She noted she has received emails from his former co-workers describing how kind he was.

She remembered how much her husband “loved his grandkids,” the trips he and his oldest granddaughter, Anna Peterson, went on and the pony rides they both participated in at the fair.

Linda Borland, a home care nurse for three companies, noted she was at a client home in Brownsdale when she was notified of her husband’s death and was unable to return home until Monday afternoon because of the blizzard.

“That was horrible,” she said.

Quincy Borland said he was upset over his father’s death, noting he had just purchased Apple Watches for his parents to prevent a similar situation from happening.

To him, his father put his health after fulfilling commitments, “always looked at the positive,” and volunteered as much as possible.

“He’s such a great guy,” Quincy Borland said. “It’s really hard for us, as you could expect. It was just unexpected.

“He was such an inspiring member of our community.”

Quincy Borland estimated thousands of people have posted statements on the difference his father made in their lives.

He noted the annual Winter Dance Party at Surf Ballroom in Clear Lake was Dan Borland’s “personal thing” and he attended the event for 26 years.

“That was his niche,” Quincy Borland said. “He loved going to Winter Dance Party.”

Former Lakes Foundation President Laura Cunningham served on the lakes board with Borland for 10 years.

To Cunningham, the most enduring aspect of Borland was his taking pictures and video at events.

“He was at everything,” she said.

Cunningham remembered Borland for being “gung-ho at all of the events, very much a force when it came to using action.” She said he attended Third of July parades — and in recent years had the judges in his front yard — and theater performances. She said his death leaves a void in the community.

“He was just an awesome dude,” she said.

She remembered taking the Blandin Leadership course with Borland, learning about his leadership style. To Cunningham, his actions “spoke volumes” of his community involvement and how much he cared about Albert Lea.

“This whole thing has been horrifying,” she said.

She also remembered Borland’s smile and thirst for knowledge.

“He was never shy about asking questions and getting more answers,” Lynne said.

She noted Borland has allowed the organization to compare its progress.

“It was a loss that touched the entire community,” Petersen said.

“He never missed an opportunity to promote.”

Petersen noted Borland took video of sled dogs at The Big Freeze earlier this month and commented on the passion Borland had for Albert Lea, his sense of humor and thoughtfulness.

“We’ve lost a giant,” Petersen said. “He was a huge advocate and champion of our community.”