‘It went from tears to happiness’ 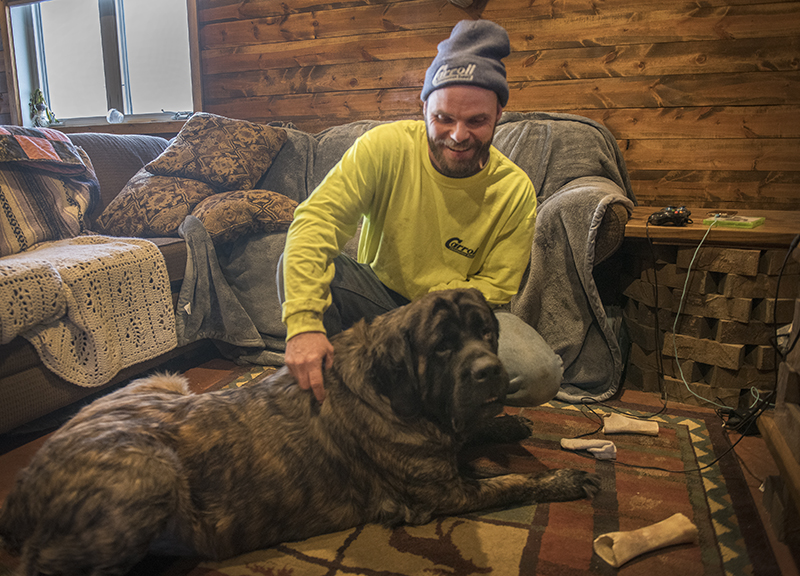 Michael Hage lost just about everything last month when the house he was renting became engulfed in flames. Luckily his dog, Ziva — who has minimal vision out of the sole eye she has — somehow made it out of the fire unharmed. - Colleen Harrison/Albert Lea Tribune

GENEVA — On Jan. 18, Michael Hage was driving from work to the house he was renting northeast of Manchester when he noticed something was off.

“I come home; it was, like, at noon,” he said. “I actually got done with work early. And then, coming over the hill … I (saw) smoke, and I actually thought the landlord was burning garbage.”

He soon realized the house was engulfed in flames and it was too late to retrieve any of his belongings.

“The only thing I came out with was what I was wearing, which I was lucky enough to have my long johns stuff on for cold weather, and my insulated pants and a couple T-shirts and my sweatshirt,” Hage said.

Despite knowing most of his possessions were destroyed in the fire — papers, titles, taxes, pictures, a brand-new bow and fly rod and passed-down trinkets, he soon received a glimmer of hope when his dog, Ziva, emerged from the fire.

“They were putting out the fire, and she came around the corner,” he said. “Even the firefighters stopped, because they were like, ‘Where did this dog come from?’ Because where they were spraying, that’s where she came from. She just appeared out of nowhere.

“I felt she was a goner. That made my day. I could lose everything again and still have my baby. She’s my kid, absolutely. It went from tears to happiness.”

Hage noted Ziva did not have any singed hair.

“She smelled like a campfire,” he said. “Made it through somehow.”

The Freeborn County Sheriff’s Office stated Hage and his roommate, Matt Kaiser, were using space heaters to heat the home, and the fire was under investigation.

Since the fire, Hage has stayed in a building owned by the family of his girlfriend, Lisa Besser, that features a full kitchen, cable television and other amenities. Kaiser is staying in a separate place.

Hage, who works for Met-Con Co. in Faribault, plans to buy a house and expects to have enough money for a down payment after he finishes working in Texas for three months to build a Viracon plant.

Hage’s employer has allowed him to take days off and offered to provide clothes, hoodies and a jacket.

Besser’s family has given Hage money, and his sister, Theresa Hage, has helped raise approximately $570 for her brother on Facebook.

She said the money will go to needed clothing and money to purchase a home.

Theresa Hage said her brother “seems to be doing well,” after the fire and thanked Besser’s family for temporarily housing him.

Michael Hage said he sees a silver lining from the fire.

“It’s gotten me to take a closer look of where I am in life, to start getting my ducks in a row instead of winging it,” he said.