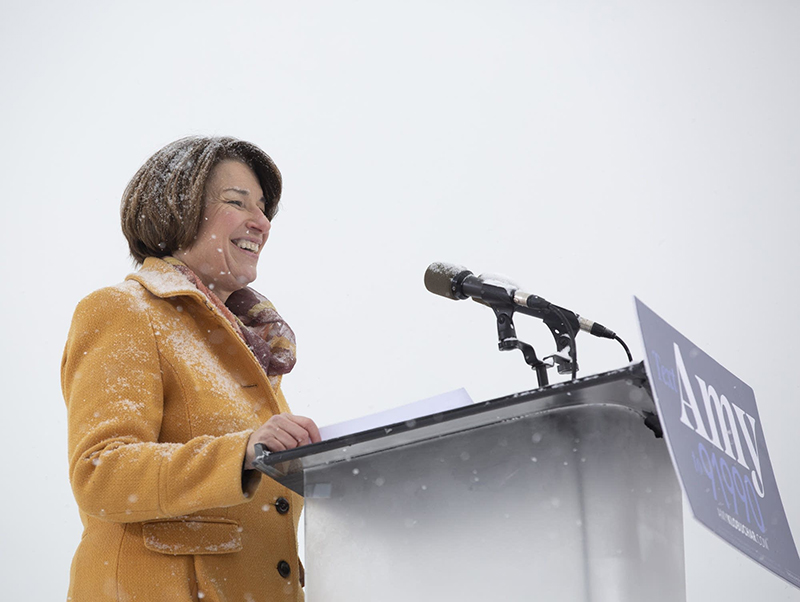 MINNEAPOLIS — With snow falling steadily and the temperature well below freezing, Minnesota Sen. Amy Klobuchar said she’s joining the group of Democrats running for president and would take her campaign — and her Midwest sensibilities — directly to parts of the region Donald Trump won and that her party wants to recapture in 2020.

“For every American, I’m running for you,” she told an exuberant, snow-covered crowd gathered Sunday at a park along the Mississippi River with the Minneapolis skyline in the background. “And I promise you this: As your president, I will look you in the eye. I will tell you what I think. I will focus on getting things done. That’s what I’ve done my whole life. And no matter what, I’ll lead from the heart.”

Klobuchar, who easily won a third-term last year, is the most prominent candidate from the Midwest to enter the race. She’s pointed to her broad appeal across Minnesota — where she’s drawn support from voters in urban, suburban and rural areas, including in dozens of counties Trump won in 2016 — and says that success could translate to other Midwestern states such as Michigan and Wisconsin, reliably Democratic in presidential races for decades until Trump’s victory over Hillary Clinton.

Klobuchar said she would travel next weekend to Iowa, home to the nation’s first caucus, joking it’s “a place where we in Minnesota like to go south for the winter.” That trip will be followed by stops in Wisconsin, where Clinton was criticized in 2016 for not spending enough time.

“We’re starting in Wisconsin because as you remember there wasn’t a lot of campaigning in Wisconsin in 2016. With me, that changes,” Klobuchar told reporters after the event, noting her mother grew up in the state. “I’m going to be there a lot.”

Klobuchar, who has prided herself for achieving results through bipartisan cooperation, did not utter Trump’s name during her kickoff speech. But she did bemoan the conduct of “foreign policy by tweet” and said Americans must “stop the fear-mongering and stop the hate. … We all live in the same country of shared dreams.” And she said that on first day as president, she would have the U.S. rejoin an international climate agreement that Trump has withdrawn from.

Trump responded to Klobuchar’s announcement with a tweet mocking her stance on global warming, a phenomenon he has disputed in the past. He wrote that Klobuchar talked proudly “of fighting global warming while standing in a virtual blizzard of snow, ice and freezing temperatures. Bad timing. By the end of her speech she looked like a Snowman(woman)!” Trump often overlooks evidence of record global warming and conflates cold spells and other incidents of weather with climate, which is long-term.

Asserting her Midwestern values, she told a crowd warmed by hot chocolate, apple cider, heat lamps and bonfires: “I don’t have a political machine. I don’t come from money. But what I do have is this: I have grit.” She said the country’s “sense of community is fracturing” today, “worn down by the petty and vicious nature of our politics. We are all tired of the shutdowns and the showdowns, the gridlock and the grandstanding.”

The list of Democrats already in the race features several better-known senators with the ability to raise huge amounts of money — Elizabeth Warren of Massachusetts, Kamala Harris of California, Kirsten Gillibrand of New York and Cory Booker of New Jersey, who welcomed Klobuchar to the race during a campaign stop in South Carolina.

The field soon could expand to include prominent Democrats such as former Vice President Joe Biden of Delaware and Vermont Sen. Bernie Sanders.

A Des Moines Register/CNN/Mediacom poll conducted by Selzer & Company in December found that Klobuchar was largely unfamiliar to likely Iowa caucus-goers, with 54 percent saying they didn’t know enough about her to have an opinion, while 38 percent had a favorable opinion and 8 percent had an unfavorable opinion.

“She starts out perhaps with a better understanding of Midwestern voters, but I think she faces the same hurdles every one of them face, which is: Are Iowans going to find them either the best candidate to defeat Donald Trump or the candidate that most aligns with their ideologies and issues?” said John Norris, a longtime Iowa-based Democratic strategist. “I don’t know that coming from Minnesota gives her any advantage with Iowans.”

Klobuchar, 58, is known as a straight-talking pragmatist willing to work with Republicans, making her one of the Senate’s most productive members at passing legislation.

Cindy York, a retired teacher who attended the rally, said she’s always respected Klobuchar for her “ability to get at the hard questions in a polite and respectful way,” adding “I think we need a lot more of that in this country.”

She said she has friends of all political leanings who have supported Klobuchar, and she sees that as an advantage over the rest of the Democratic field.

“Many of the others are probably a little too liberally perceived or left-leaning,” York said. “I think Amy is perceived as more of a centrist, always has been, and I have tremendous respect for that. She’s a consensus builder and we need that.”

The rally took place not far from the Interstate 35W bridge over the Mississippi. The span was built after the previous bridge collapsed in 2007, killing 13 people. Klobuchar had worked with then Sen. Norm Coleman, R-Minn., to help fund the new bridge and get it completed at a faster-than-usual pace.

“We worked across the aisle to get the federal funding and we rebuilt that I-35W bridge — in just over a year. That’s community. That’s a shared story. That’s ordinary people doing extraordinary things,” she said.

Klobuchar’s focus in recent months has included prescription drug prices, a new farm bill and election security. She supports the “Green New Deal,” a Democratic plan proposed this past week to combat climate change and create thousands of jobs in renewable energy.

But her legislative record has drawn criticism from both the GOP and some fellow Democrats. Some Republicans say Klobuchar is able to get things done because she pushes smaller issues. Some progressives say she lacks the kind of fire and bold ideas needed to bring significant change and excite voters.

Klobuchar on Sunday also responded to news reports that she has mistreated staff, saying she “can be tough” but has many staff members who’ve worked for her for many years.

Klobuchar, a lawyer and the former prosecutor in Minnesota’s largest county, raised her national profile during a Senate Judiciary Committee last fall for Supreme Court nominee Brett Kavanaugh, who was accused of sexually assaulting a woman when they were both in high school.

When Klobuchar asked Kavanaugh whether he ever had had so much to drink that he didn’t remember what happened, he turned the question around. He asked Klobuchar, “Have you?”

“When you have a parent who’s an alcoholic, you’re pretty careful about drinking,” she said. “I was truly trying to get to the bottom of the facts and the evidence.”

Among the other Midwestern lawmakers who could seek the nomination are Sen. Sherrod Brown of Ohio, who has been visiting early voting states, and Pete Buttigieg, the mayor of South Bend, Indiana, who established an exploratory committee last month.

What did local DFL and Republican Party leaders think of Klobuchar’s presidential announcement?

Freeborn County DFL member Jennifer Vogt-Erickson spoke highly of Klobuchar. To Vogt-Erickson, Klobuchar could appeal to Democrats and registered independents and has a record of working with Republicans.

“She’s really solid and has done an excellent job as a senator for Minnesota,” Vogt-Erickson said. “I think she’s in a good position to share our message more broadly.”

Vogt-Erickson, who noted she has not found a favorite in the Democratic field, said she supports Klobuchar’s stances on women’s and worker rights.

“Klobuchar is joining a strong field of candidates, and it’s still very early. This will be an exciting race, and I’m looking forward to substantive debates.”

“She hasn’t done anything that has made herself stand out in the Senate.”

Howe said allegations that Klobuchar has mistreated her staff, if true, could result in her having a difficult time keeping a campaign team together.