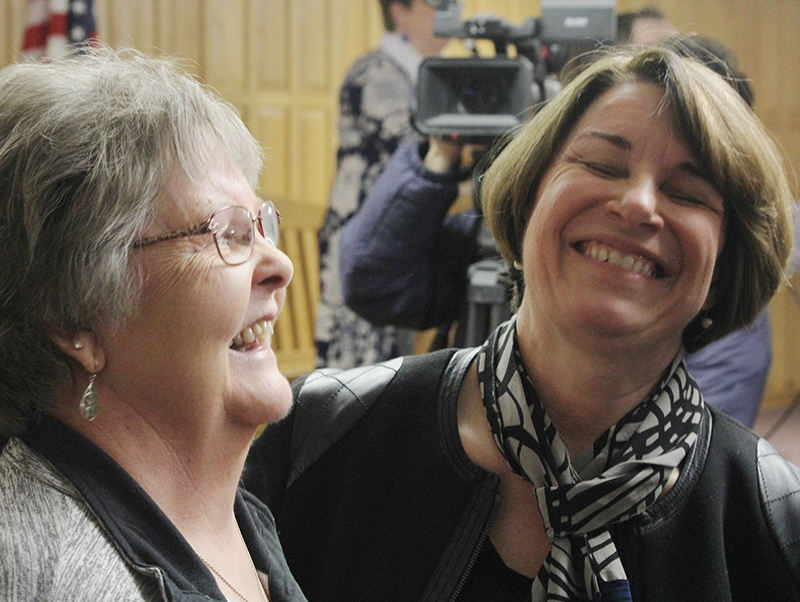 The Democratic senator positioned herself as something of an underdog, emphasizing her Midwestern roots and grit to appeal to voters in Iowa and Wisconsin.

“It’s a homegrown campaign,” she told reporters after a stop in Knoxville, Iowa, on Sunday. “I know I’m gonna have less money than some of the other candidates.”

Klobuchar continued her focus on issues such as tackling climate change and income inequality, but didn’t dive into many specifics — most notably her health care platform — as she prepared for her first New Hampshire visit Monday, including a primetime CNN town hall airing that night.

However, the weekend’s events focused more on introductions than policy specifics.

This inaugural out-of-state run brought Klobuchar’s week-old campaign to a bike-and-coffee shop in Eau Claire, Wisconsin, and a bar in Mason City, Iowa, on Saturday, then a brewery and church in the southeastern Iowa towns of Knoxville and Albia. The events were relatively small, with Klobuchar’s daughter, Abigail, and husband, John Bessler, attending each one.

The senator seemed at home in Iowa amid the weekend snowstorms, often name-dropping people she knows or had campaigned for such as former Sen. Tom Harkin.

Klobuchar highlighted her ability to win in areas Democrats traditionally don’t. She leaned into criticism of President Trump and told crowds she has what it takes to keep him from a second term.

“I know that I can beat Donald Trump because I have won in rural counties in our state,” Klobuchar said. “I have won every single congressional district, including Michele Bachmann’s three times in a row.”

Beverly Wickstrom, who chairs the Eau Claire County Democratic Party, was happy Klobuchar started her trip in Wisconsin, a state where Hillary Clinton didn’t campaign in the 2016 election. Wickstrom said Klobuchar is the type of Democrat who could bring people into the party who are tired of Republican politics.

“We’ve got a lot of moderate Republicans and independents who are very, very disturbed by the approach that our president has taken, so they’re looking for other options,” Wickstrom said. “We’ve welcomed them into the Democratic Party tent and given what she has done in terms of working across the aisle, that may well be true that she’s a good alternative for them.”

A glance into Klobuchar’s platform, how she’ll stand out

She also emphasized infrastructure investment, tacking income inequality — including a $15 an hour national minimum wage — and addressing the urban-rural divide. Klobuchar also got big applause when she’d bring up campaign finance reform and automatic voter registration for all eligible people when they turn 18.

Klobuchar repeatedly told crowds she’d reform prescription drug pricing if elected, telling the story of a man who died after not being able to afford his insulin.

However, she didn’t detail her vision for overall health care reform aside from saying the country should move toward universal health care. At the Knoxville rally, she suggested expanding upon the Affordable Care Act to make Medicare and Medicaid more widely available.

On Saturday, at least, some people wanted to hear more.

“We know there is massive suffering going on in the country because of health care issues. You are one step away from bankruptcy if you don’t have the right kind of health care,” said Barbara Gosch, 78, of Eau Claire, who said the senator should specify her plans.

A year before Iowa holds the nation’s first caucus, Klobuchar found herself going up against two other presidential contenders in Knoxville Sunday afternoon — Maryland Democratic Rep. John Delaney and businessman Andrew Yang, who had a representative appearing on his behalf.

Perhaps Klobuchar’s biggest challenge looking forward is differentiating herself from the crowd of some two dozen declared candidates or those considering entering the race.

For Bill Hoekstra, 56, of Mason City, Klobuchar’s bipartisanship was a plus. He said she’s one of his favorite contenders so far this election cycle.

“I like that she’s able to work across the aisle. I think she’s very tough, without being too tough. I think she has genuine concerns for issues about the climate and people of color and getting things done,” he said.

Klobuchar lags behind a few frontrunners in name recognition and fundraising. For example, Klobuchar raised $1 million in her campaign’s first 48 hours. No small feat, but California Sen. Kamala Harris hauled in $1.5 million in its first 24 hours.

However, Klobuchar didn’t seem bothered by any fundraising concerns. One of her refrains over the weekend was that she didn’t “come from money,” nor does she have a “political machine.”

“I know how to reach out and to go not just where it’s comfortable, but where it’s uncomfortable. That is what people are looking for,” Klobuchar told an Iowa crowd. “They’re not going to agree with everything I say or what any of these candidates say.

“But what they do want is someone who understands them, that finds the common ground and that has their back. That’s me.”