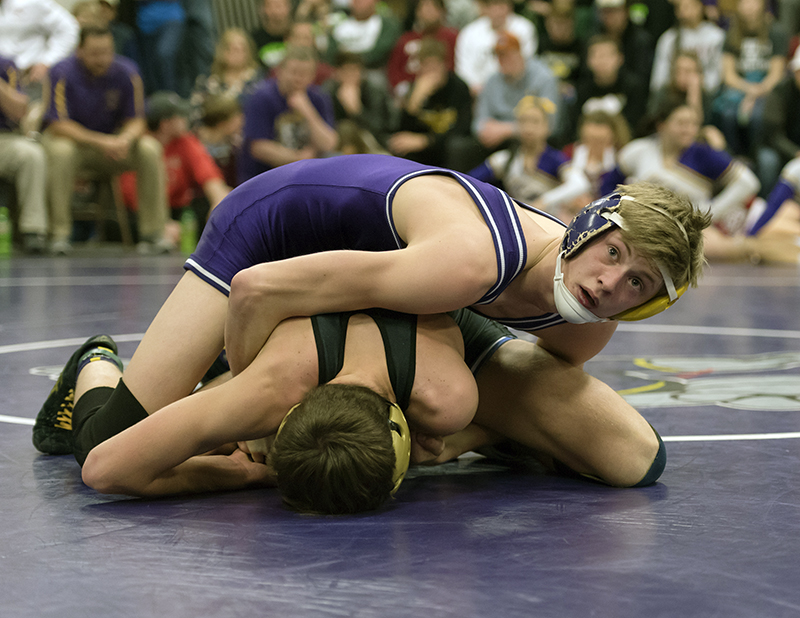 Lake Mills junior Tyler Helgeson rides out his opponent at the district tournament in Lake Mills on Saturday. Helgeson earned his third straight state appearance with a first-place finish in the tournament. - Lory Groe/For the Albert Lea Tribune

Seven Lake Mills wrestlers and one Northwood-Kensett wrestler competed at the district tournament in Lake Mills on Saturday afternoon at their last stop before the state tournament.

Of the eight competitors, four Bulldogs placed first in their respective weight classes and punched their ticket to Wells Fargo Arena in Des Moines, Iowa.

To earn a state title appearance, wrestlers had to place in the top two of their division.

For the Bulldogs, sophomore Jack Ramaker wrestled at 113 pounds. Ramaker was a state qualifier in 2018, but failed to make the tournament this year, falling in two close decisions 4-2 and 7-5.

Junior Jimmy Gallardo won two narrow matches at 120 pounds to claim first place and a spot at the state tournament. Gallardo won 7-6 in the semifinals, then 8-7 in the finals. Junior Tyler Helgeson also took first place in his 126-pound class. Helgeson won his semifinal match in a second-period pinfall and followed that with a dominant 9-2 decision win in the finals.

Senior Caiden Jones made it three Bulldogs championships in a row, taking the crown at 138 pounds. Jones won a 8-4 decision in the semifinal round before pulling out a thrilling victory in the finals match, 2-1. 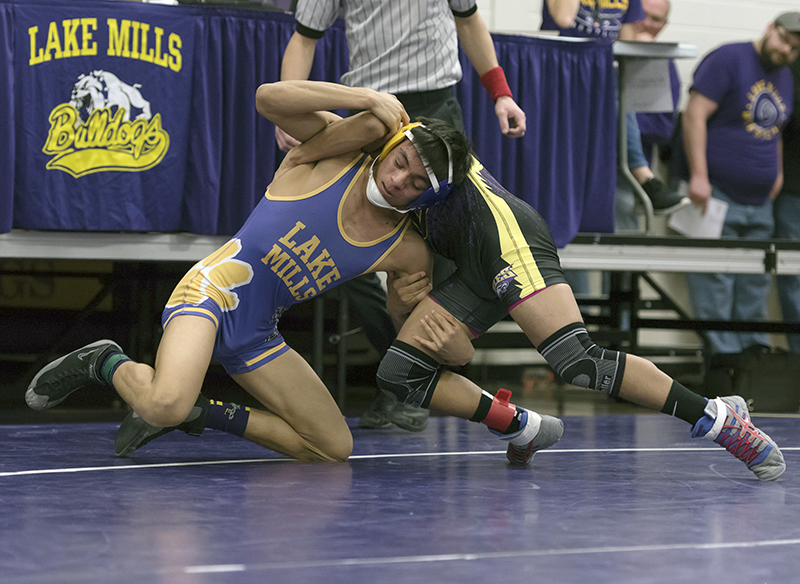 Finally for the Bulldogs, senior Zack Wagner took third place at 170 pounds. Wagner fell in a 6-2 decision to open his day, but rebounded with a second-period fall in the consolation round to earn a wrestleback. However, he fell victim to a late pinfall in the wrestleback match, earning him a third-place finish.

“It was nice to not only get four qualifiers, but is important all of them placed first,” said head coach Alex Brandenburg. “Our sectional and district were very tough this year, which made it so many of our great wrestlers did not get through.”

On the Vikings’ side, junior Caden Scharge competed at 132 pounds. Schrage came up just short of a state tournament bid with a third-place finish. He lost a narrow 10-7 decision in the semifinal round, but followed it with a dominant 16-0 technical fall in the consolation round. He missed a wrestleback opportunity, however, landing him in the third-place slot.