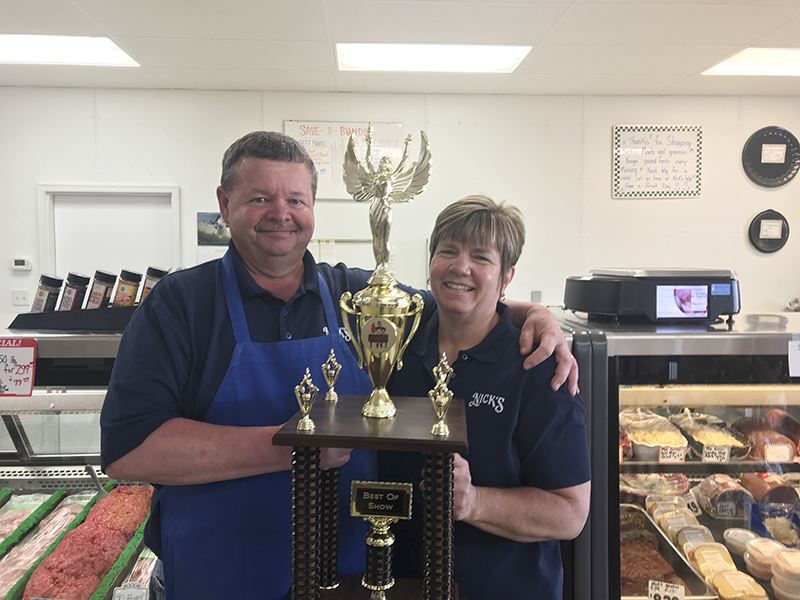 Todd and Cheryl Enderson, owners of Nick's Meats of Hayward, pose with the Best of Show trophy they won at the Minnesota Association of Meat Producers annual convention in May 2018. - Kelly Wassenberg/Albert Lea Tribune

HAYWARD — Although it has been quite some time since customers have seen anyone named Nick at Nick’s Meats, they’ve had no problem finding award-winning meats behind the counter.

Todd Enderson and his wife, Cheryl, now run the establishment and carry a coveted item — their signature summer sausage.

Enderson said the recipe has remained unchanged for 40 years, which is far longer than they have owned the establishment.

“You don’t change a winning formula,” he said.

“We’re starting to put together a plan of what to take to the show,” he said.

Enderson said they would enter several of the 26 categories when they first took over the business, but they’ve trimmed down the amount of products they take. The number of awards they bring home each year has been consistent, though.

He said they typically win between four to eight a year. Last year they took home seven.

When you compete at the Minnesota Association of Meat Producers Convention, you’re competing against some of the best producers in the state of Minnesota, so whenever you bring something back, it’s an accomplishment, Enderson said.

In addition to strategizing for what to bring to the convention, the staff at Nick’s Meats will spend the next four to six weeks processing deer.

The custom processing aspect of the business is steady throughout the year.

Customers can bring in the whole carcass to be processed if the animal was hunted in Minnesota. Due to Department of Natural Resources regulations, any animal hunted outside of the state must be boneless or quartered before it is processed.

Many customers already know how they want the animal processed, and many times this includes orders of summer sausage.

It’s also what Enderson likes the most about his work.

“I enjoy coming to work everyday and just making sausage,” he said. I’m a hands-on guy. I like to see the product from start to finish.”

Throughout the process, he taste-tests the meat to make sure the end result is up to his standards, and when it’s right, “That’s what puts a smile on your face,” he said.